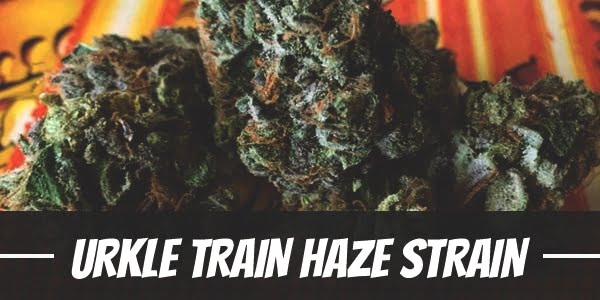 Ghost Train Haze is a versatile strain. It can be used as a wake-and-bake treat but also amped up for nighttime use instead. Although it has strong Sativa genes, its buds are not at all fluffy. Instead, it is dense and blanketed in crystal trichomes. However, its flowering period is quite long.

To address this, breeders from Arizona Natural Selections crossed it with a strain with a sturdy frame. The widely-loved Purple Urkle fit perfectly to this end. It has a short flowering period and a great growing profile. It also has a delicious flavor that entices the palate and an Indica high that tranquilizes the body.

In crossing the two, Arizona Natural Selections created the slightly Indica-leaning Urkle Train Haze. It is potent with THC levels averaging between 20% to 23% which provide users with immense therapeutic benefit.

Apart from being a medicinal strain, Urkle Train Haze is a wonderful recreational bud to use both during the day and night. It can be a morning companion that inspires creativity. It can also be used right before a meetup with friends as it makes one more comfortable with sharing ideas, experiences, or memories.

Urkle Train Haze’s onset is marked by a rush of euphoria that instantly enhances the mood within minutes after smoking its buds. Thus, it should come as no surprise that users feel lighter and happier. Along with the better mood is inspiration to tell stories or share experiences.

The mental clarity, along with the upbeat disposition, is beneficial for casual users who have work ahead. It creates head space for new ideas to freshen up one’s perspective. With heightened focus and renewed creativity, users work with full concentration to finish tasks on time. One may also use it right before a brainstorming session with like-minded friends or colleagues as it also enhances confidence to share concepts.

After about an hour or two, a buzzing sensation trickles down from the temples. It eases into the body as a light pressure that eases the muscles as it makes its way to the toes. In all likelihood, users will want to bask in deep relaxation while lounging around the couch. The freedom from mental and physical inhibition can be a totally arousing experience as well. For some, it excites a carnal desire to spend time with a loved one.

Urkle Train Haze has the berry profile of its parent Purple Urkle. Enhancing it, however, are its citric undertones of lemon. Although sour upon combustion, its smoke later turns sweeter and is balanced by a note of wet soil.

Urkle Train Haze bursts in the mouth with fruity overtones of berries and lemons. There is a slight tang to its smoke especially while swirling it inside the mouth. On the exhale, it leaves a sweet but earthy aftertaste that perfectly counters its sour introduction.

Cannabis’ moisture inhibiting cannabinoids will always dry the eyes and the mouth regardless of the dosage. It is unavoidable but easily manageable by staying hydrated throughout and after the session. Although rare, it is also possible to experience anxiety while smoking Urkle Train Haze. Its head high can be disorienting, causing a slight dizziness that lasts for hours. Moderation, however, will keep it at bay.

A product of Arizona Natural Selections, Urkle Train Haze is a proven medicinal strain. It has significant therapeutic benefits that appease a wide array of afflictions. Its mood-enhancing onset, for instance, also stabilizes turbulent emotions caused by stress, anxiety, and the overwhelming feeling of hopelessness.

Replacing it is a soothing euphoria that manages symptoms of depression and other mental health issues like PTSD. It brings back one’s lost confidence, sociability, and an innate sense of happiness that flicks away negative thoughts. For long-term treatment, however, it is still better to meet with a health professional.

In high levels, THC turns into a natural painkiller that appeases aches beginning from the temples. Its soothing effects also extend up to the toes. It releases tension in the muscles to prevent it from contracting out of pain.

Urkle Train Haze has an Indica-leaning structure. It has a sturdy structure with a thick frame and branches that do not break easily against strong gusts of wind. Because of this, it is a great strain to grow in farms and gardens. It can also be cultivated indoors because of its compact structure.

It works best with the Sea of Green method. Growers can plant at least four seeds in a single square meter to maximize space.

Sour Urkle is the result of a union between the famous Sour Diesel and Purple Urkle strains. Read our full review for more details like: THC levels, CBD levels, Yields and more!

Another way to increase turnout is using hydroponics as a medium which delivers nutrients straight to the roots. However, beginners may want to stick to soil instead because it is cheaper and more manageable.

Thinning it out is also essential. Its dense foliage can sometimes harbor moisture in between its crevices, resulting in the onset of humidity-related problems like mold, mildew, and root rot.

Urkle Train Haze has an indoor flowering period of 7 to 9 weeks. It yields between 10 to 12 ounces of buds per square meter.

Flowers fully mature around the last few days of September to the second or third week of October for Urkle Train Haze. Growers can expect at least 12 ounces of buds per plant at harvest.

Have you ever smoked or grown your own Urkle Train Haze? Please let me know what you think about this marijuana strain in the comments below.