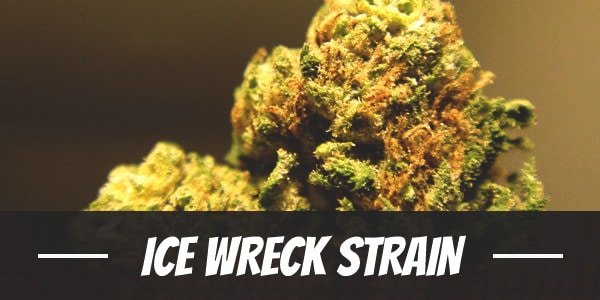 Ice Wreck is a thrill seeker’s dream. It has a potent head high that leaves users feeling upbeat. Meanwhile, its bodily effects are totally tranquilizing. The same recreational buzz also has medicinal effects that offer comfort to patients with health issues.

Ice is a heavy-hitting strain with an intense chemical aroma. In all likelihood, enthusiasts who use it will fall asleep in peace. Trainwreck, on the other hand, provided its stimulating euphoria that not only enhances the mood but also stimulates it. Both strains have an impressive growing profile that is characterized by increased trichome production and a short flowering period.

The well-balanced hybrid can be used all throughout the day. Small amounts make it a delicious pick-me-up on long, strenuous days. Increasing the dosage, on the other hand, will make it the perfect companion for a relaxing, stress-relieving evening.

At 18% to 28% THC, Ice Wreck is an incredibly potent strain with potentially devastating effects. It can send the mind straight into the sky at an overwhelmingly fast pace if used consumed outside of personal bounds. In moderation, however, it has a pleasant buzz to it that coats the body in a calming wave of tranquility.

Its onset is marked largely by a rush of euphoria that visibly improves the mood. Smiles are wider and there is a noticeable glow in one’s face. A sense of happiness continues to keep the disposition upbeat by recalling cheerful memories. It releases the dreaded worries one accumulates at the workplace so one goes home lighter.

We don’t currently sell the Ice Wreck seeds. Check out other Hybrid seeds in our marijuana seed bank.

After about an hour or two, a light pressure trickles down from the temples. It eases the muscles as it ebbs down to the toes, making the body limber. It makes one limber like a well-oiled machine that allows users to perform light physical tasks. In all likelihood, users will want to lounge on the couch as the bodily effects continue to persist.

Eventually, it plants a heaviness in the limbs that make the eyes droop. Without a doubt, Mr. Sandman will extend an invitation to dreamland before the comedown.

Ice Wreck has an aromatic blend of earth and cooling menthol. Its minty overtones are complemented by a skunk undertone. Combusting it releases its sharp ammonia. In spite of this, its chemical scent is not at all overwhelming.

Ice Wreck introduces itself in the palate as a cool mint with hints of earth. Its menthol flavors refresh the senses while its skunk undertone adds a subtle sourness. Bringing out its tangy note is its chemical aftertaste of ammonia.

Red, irritated eyes is a common reaction to smoking Ice Wreck. Along with it is a cottonmouth especially once the cannabinoids begin to inhibit saliva production. Both are mild, barely noticeable, and temporary. Although seasoned users usually ignore the dry spell, one may still reduce the discomfort by downing a few glasses of water.

A rarer side effect is dizziness that can trigger anxiety. In worst case scenarios, it can lead to a subtle but unsettling feeling of paranoia. Because of this, it is essential that users consume within personal limits to keep the experience pleasant.

In spite of what its name suggests, Ice Wreck does not at all induce ruining effects. On the contrary, it is a beneficial bud that provides users with therapeutic reprieve. It has a restorative head to toe high that effectively manages health issues.

Its happy high, for instance, improves moods and clears the mind. It replaces negative thoughts with cheerful memories as well as an upbeat disposition. Meanwhile, its soothing euphoria calms away the worry or dread that stress incites. Because of this, it is perfect for relieving stress. Similarly, it can also be used as an anti-depressant that temporarily appeases depression and issues such as anxiety or PTSD.

Its analgesic properties reduce pain and aches all over the body. It eases the muscles and releases it of tension to prevent sudden contractions. At the same time, it Free from mental and physical inhibition, users gradually become drowsy. Its sedating properties improve the quantity and quality of sleep while hastening bedtime.

Ice Wreck is an incredibly versatile strain that can grow inside a controllable environment and the outdoors. It has a sturdy frame, as alluded to by its thick stalks and branches. At the same time, it has good resistance to growing conditions like a cool climate, a strong gust of wind, or short days.

Still, potential growers should protect it against heavy rains and frost which can either stunt the plant’s growth or kill it overnight. To this end, one may either move the batch indoors or install a temporary enclosing which will soften the blow of mother nature’s wrath.

Because it exhibits both Indica and Sativa qualities, it is the perfect candidate for the Sea and Screen of Green method. The former utilizes its relatively compact structure by cultivating at least four seeds in a single square meter. Meanwhile, the latter maximizes light distribution by placing a screen or net on top of the current canopy and weaving branches through its holes as it grows. Regardless of what one chooses, both will enhance bud production.

We don’t currently sell the Ice Wreck seeds. Check out other Hybrid seeds in our marijuana seed bank.

During the flowering period, its buds develop a light green hue similar to mint. Contrasting it are orange hairs and golden crystals that enhance its overall look. Applying Low-Stress Training (LST) techniques is crucial as a female plant can turn into a hermaphrodite which yields low quality buds.

It takes about 8 to 10 weeks for Ice Wreck to fully flower. Growers can expect between 12 to 14 ounces of buds per square meter at harvest.

In the northern hemisphere, Ice Wreck flowers in October usually around the second to the last week of the month. It yields at least 9 ounces of buds per plant once the strain is fully mature.

What is the Ice Wreck strain yield?

How much THC does Ice Wreck have?

What are the origins of the Ice Wreck strain?

Ice Wreck was created from a mix between Ice and Trainwreck.

Have you ever smoked or grown your own Ice Wreck? Please let me know what you think about this marijuana strain in the comments below.