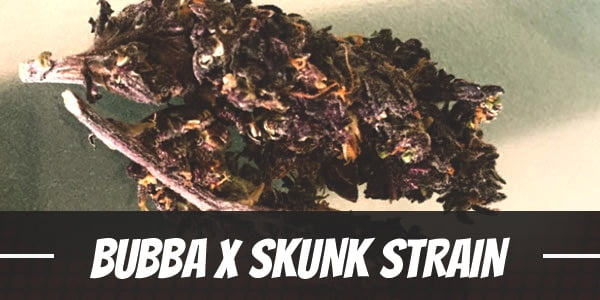 Bubba x Skunk can pass for a growing staple. It is highly coveted among breeders due to its hybrid characteristics. On the outside, it looks like Bubba Kush. But, upon closer inspection, one can tell that it is taller and faster version of its parent. Due to its pungency, it can easily fill a room with its aroma especially when it begins to double trichome production. Of course, nothing short is expected of the Skunk offspring. Like its parent, it is also high-yielding.

The perfectly balanced strain is a staple among recreational enthusiasts as well. It is highly potent with effects that move from head to toe especially once its onset finally begins. It may not be a good idea to use the strain as a wake and bake treat on a busy day though. It has a heavy-hitting comedown that will entice users to chill and relax instead of work.

Bubba x Skunk is a potent strain that users should always take in moderation. Its THC levels average between 20% to 27% which make it among the top strains on a thrill seeker’s list. It induces a dreamy head high that is perfectly complemented by a creeping bodily effect at the comedown. Interested beginners may want to use the strain under the supervision of a seasoned friend as the pleasant experience can turn south quickly.

In spite of its potency, however, Bubba x Skunk is a slow starter. Rather than overwhelming the mind with an instant head rush, it introduces a light euphoria that does not settle until 15 minutes after the first few puffs. Once it settles, users immediately exhibit a change in behavior.

Smiles grow wider and users glow from an innate sense of happiness. The upbeat disposition, along with the free headspace, is conducive for thoughts to flow freely. It inspires creativity as concepts turn into ideas. The fresh perspectives make for a great conversation starter. And, with improved confidence, one can take advantage of the sociability it encourages.

Gradually, a tingling sensation begins to develop around the temples. It creeps into the body through the muscles before settling into the toes. Through this, it thoroughly releases tension from the body before blanketing one in deep relaxation. It is not uncommon to see users begin to loosen up and take it easy by lounging on the couch. However, it is best to move to the bed as it later plants a heaviness in the limbs that lull users to sleep.

Bubba x Skunk is a pungent strain with overtones of wet soil. Enhancing it is the scent of brewed tea which releases an herbal aroma into the air. Combusting it, on the other hand, brings out its diesel undertones which are quickly balanced by a subtle sweetness.

Bursting in the mouth at the first toke is the strong taste of diesel. However, it instantly vanishes as the taste of sweet tea fills the mouth. It has a slightly herbal quality to it which later develops into an aftertaste of earth on the exhale.

It should come as no surprise that red eyes come with Bubba x Skunk. Along with it is a cottonmouth especially as cannabinoids interfere with saliva production. It is common and most seasoned users usually ignore the dry spell due to its typicality. However, inexperienced users may down a few glasses of water to ease the discomfort.

Bubba x Skunk’s happy high instantly uplifts the mood while its calming euphoria stabilizes turbulent emotions. It dispels one’s fixation on personal flaws, imperfections, and the dreadful feeling of hopelessness. By temporarily dismissing the overwhelming feelings, the strain successfully allows users to manage symptoms of depression and other mental health issues like anxiety or PTSD. It works as a stress reliever as well by relieving tension.

It has a soothing buzz with painkilling effects. It relaxes the muscles to prevent it from contracting and further causing pain to patients suffering from spasms. As such, patients who suffer from epilepsy, multiple-sclerosis, and similar conditions with spasmodic symptoms can find a reprieve in Bubba x Skunk. At the same time, it also reduces intraocular pressure which intensify headaches and migraines.

Upping the dosage will lead to a deep, unencumbered slumber that invigorates users for the next day. Its sedating properties also improve the overall quality and quantity of sleep thus effectively appeasing insomnia.

Bubba x Skunk exhibits both Indica and Sativa qualities. It is relatively tall but its frame is sturdy. Growing it outdoors in the northern hemisphere means that it flowers earlier. Not to mention, it produces big buds that are covered in a heavy coat of trichomes.

It grows best in both the Sea and Screen of Green method. The former maximizes small growing spaces by planting at least four seeds in a single square meter. Meanwhile, the latter requires that growers install a net above the canopy then weave the branches into the screen when the plant hits the flowering period.

Mediums also affect the performance of a plant. While soil significantly improves its flavor, it is mostly associated with disease as pests in a dirty growing environment. However, it is cheaper, more manageable, and beginner-friendly. Hydroponics is a soilless type of medium that delivers nutrients straight to the roots. As a result, bud and trichome production are higher but may not be so cost effective for first-time breeders.

Bubba x Skunk has a flowering period of 8 to 10 weeks. It yields between 12 to 14 ounces of buds per square meter once fully mature.

In the northern hemisphere, each plant produces at least 14 ounces of buds per plant. Harvest usually comes around the middle of October up to its last few days for Bubba x Skunk.

Have you ever smoked or grown your own Bubba x Skunk? Please let me know what you think about this marijuana strain in the comments below.