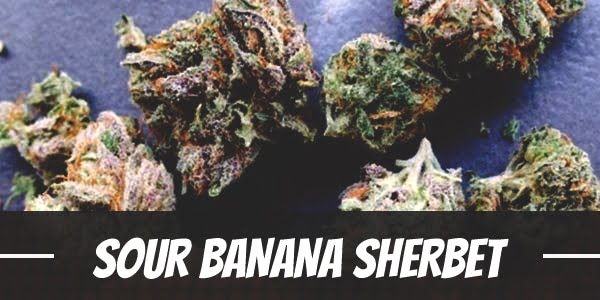 Sour Banana Sherbet has become the subject of fancy among enthusiasts in Oregon and is quickly spreading like wildfire to the rest of the world. It has a tantalizing scent that entices users to take a swig upon combustion. In the mouth, its tangy fruity smoke ignites the senses beginning from the temples down to the toes.

In creating the strain, Crockett Farms used the delicious Banana Sherbet as a base for its offspring’s terpene profile and stimulating head high. Sour Diesel, on the other hand, further enhanced the cerebral buzz was well as its sturdy frame and high yields. It contributed to its heavy production as well, making it an excellent strain for concentrates.

Its recreational effects also have significant therapeutic benefits. It provides patients with a reprieve through its tranquilizing buzz that crushes stress. It invigorates users while managing symptoms of mental and physical fatigue.

Sour Banana Sherbet is a hybrid with relatively quick-acting effects. Its onset is marked by a tinge of euphoria that leaves users feeling happy throughout the high. Smiles shine brighter as cheerful memories inspire an upbeat disposition. Not to mention, one feels exceptionally lighter after clearing the mind.

One of the best times to use the strain is right before a meal. Its initial mental stimulation can wake the appetite. Not only that, a hearty meal that can replenish any lost energy. Users may prepare some snacks ahead of time or pour the rest of one’s time into concocting a bowl of food.

After about an hour or two, a light pressure from between the eyes intensifies. It oozes down to the rest of the body until it is eventually enveloped by relaxation. Soothing each muscle is the same buzz that relieves the body of stress and fatigue. In spite of its intensity, it does not lock users to the couch.

With that said, Sour Banana Sherbet can be used at any time of the day. Pacing is important though. The psychoactive high that its THC levels of 18% to 24% deliver can be overwhelming. In fact, using beyond tolerance levels can stun the senses with its debilitating effects.

Sour Banana Sherbet has a pungent aroma with both sweet and sour overtones. Breaking it apart reveals the scent of ripened fruits. Combusting it, however, releases its diesel and fuel undertones.

Consuming Sour Banana Sherbet is like drinking a banana shake. It swarms the mouth with a fruity overtone with sour undertones reminiscent of fuel and diesel. On the exhale, it leaves a sweet aftertaste in the palate.

Most users often ignore the dryness that comes with smoking Sour Banana Sherbet due to its typicality. Moreover, it can be easily mitigated by staying hydrated throughout the day. A bigger cause for concern is greening out. Due to its potency, the keen awareness it delivers can sometimes trigger anxiety and paranoia especially in enthusiasts prone to the two conditions. The side effect is usually limited to a disorienting dizziness, but one should still consume the strain moderation.

Sour Banana Sherbet has an uplifting high that crushes stress. Its anxiolytic properties also appease the overwhelming dread and anxiety that stressors trigger. At the same time, the calming euphoria that it delivers enhances the mood while stabilizing turbulent emotions. In doing so, it temporarily suspends self-depreciating thoughts that often bring down confidence and incite feelings of hopelessness instead. As a result, it is a source of reprieve by long-sufferers of depression as well as other mental health issues like PTSD.

Its tranquilizing body buzz also relieves various other aches and pains in the stomach caused by either disorder or disease. Its ability to relax the gastrointestinal tract, for example, prevents users from vomiting and is effective against the nausea. It also relieves the hunger pangs and spasms that are common among patients with anorexia and other eating disorders like cachexia. Thus, it stimulates the appetite and encourages users to eat heartily.

Sour Banana Sherbet has the structure of a hybrid. It is sturdy but tall with thin lime green leaves. Contrasting it are trichome-frosted buds with light yellow-orange pistils. Though small, each nug is dense and heavy especially when placed in the palm of one’s hand. Because of this, it is a popular strain with immense commercial potential.

Due to its thick frame, Sour Banana Sherbet has a strong chance of surviving outdoor conditions in the northern hemisphere. However, it has to be protected against the extreme cold, heavy rains, and strong gusts of wind which may either stunt its growth or kill the plant overnight. Placing it indoors or installing a temporary enclosing will keep the harsh weather from destroying the batch.

Indoors, it is necessary for one to soak the seeds overnight, so the feminized seeds develop into female plants that produce buds. Topping is also essential. Not only will it keep the plant short, but also initiate the flowering period. Its height and compact structure make it a great candidate for both the Sea and Screen of Green method. The former allows growers to cultivate at least four plants in a growing area by maximizing space. Meanwhile, the latter weaves branches into a screen situated above the current canopy to distribute light evenly. Both will significantly increase the creation of budding sites.

Growers can also choose between mediums. Soil brings out the overall flavor of the buds. It is also a better accompaniment to first-time growers. Meanwhile, a soilless medium like a hydroponics setup will hasten the growing process since it delivers nutrients straight to the roots. It also has the potential to double yields and trichome production, albeit it will require some higher knowledge of gardening.

Sour Banana Sherbet has a short indoor flowering period of 8 to 10 weeks. It is a high yielder, with each square meter producing at least 18 to 21 ounces of buds per square meter.

In the northern hemisphere, Sour Bana Sherbet flowers from the second week of October up to the month’s last few days. Growers can expect each plant to produce at least 21 ounces of buds at harvest.

Have you ever smoked or grown your own Sour Banana Sherbet? Please let me know what you think about this marijuana strain in the comments below.