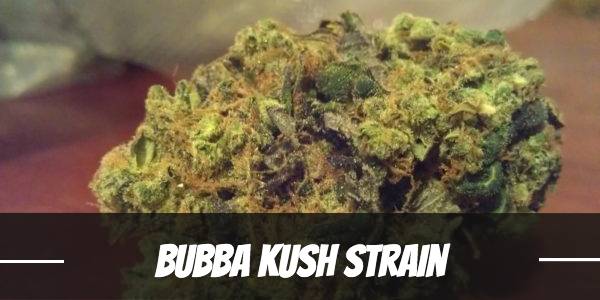 A famed native of California, Bubba Kush is said to have been created by crossing an OG Kush hybrid with an unknown Indica rumored to be from New Orleans.

Its parentage is also known to stem from Northern Lights, however, it isn’t 100% certain.

Bubba Kush weed was created in 1996, and has since become somewhat of a sensation.

It has gained notoriety in the United States for being heavy on the couch-lock, making Bubba Kush a popular and effective relaxant.

Bubba Kush is an exceptionally effective muscle relaxant. Muscle tension is easily eased with a couple of puffs of this strain, and a pleasant, heavy euphoria is quickly observed.

Bubba Kush is the quintessential happy-strain, putting the mind and body at ease without delay.

If you are trying to stay focused, this isn’t the strain for you.

Bubba Kush has a high that is hazy and soothing, and plunges you in a dream-like state with an intense head high that can contain visuals.

It can induce a state of relaxation, and sleepiness, if consumed in larger doses.

A happy, delightful mental high can be observed, often encouraging forgetting one’s day-to-day stresses and allowing for a deep unwinding.

Expect some heavy eyelids, as this preferably night-time strain is guaranteed to physically blanket you in a cloud of sleepiness, much like the sandman has been around for a visit.

Its most common side effect is a feeling of dry mouth accompanied with dry eyes and a sensation of feeling dehydrated.

A general feeling of being “stuck on your couch” can easily happen, because its strong Indica properties can create a heavy-body sensation that can leave you feeling like you can’t move.

Bubba Kush has a very invigorating aroma, smelling much like coffee and roasted nuts at times.

It has a hint of pine and earthiness, which rounds up its full-bodied fragrance.

When smoked, Bubba Kush leaves a cloud of spice and sweetness that lingers in the vicinity.

Much like its aroma, Bubba Kush has a strong nutty taste to it. It has inherited the tanginess of its OG Kush heritage, making it taste reminiscent of pine and spice.

Certain notes of chocolate and sweetness can be observed at times, and leaves an aftertaste that hints at a tootsie roll.

Bubba Kush is widely known as a heavy smoke, and generally isn’t recommended for a morning smoke.

It can make you feel lethargic and dizzy if taken in small doses.

In some cases, paranoia may be observed, especially in those who aren’t accustomed to its heaviness, causing a mild form of confusion and anxiety.

Its most common side effect is a feeling of dry mouth accompanied with dry eyes and a sensation of feeling dehydrated.

A general feeling of being “stuck on your couch” can easily happen, because its strong Indica properties can create a heavy-body sensation that can leave you feeling like you can’t move.

Bubba Kush is a famed medically used strain, due to its potency and effectivity.

It is used to fight off feelings of stress and restlessness, and comes highly recommended for the treatment of pain.

Insomnia, which can be triggered by anxiety, depression and other mental disorders, can be successfully mended with the regular use of Bubba Kush.

Its strength can provide a relaxing full night’s rest, often not taking much time before kicking in and inducing sleep.

A lack of appetite observed in those who are undergoing treatment for cancer, especially radiation and chemotherapy, may regain their hunger when using Bubba Kush.

It is also highly effective as a powerful pain-reliever, healing many aches and pains both acute and chronic.

Easy to grow all-round, Bubba Kush can be cultivated in both indoor and outdoor setting, but is known to produce the highest yields in hydroponic environments.

It is naturally resistant to most common diseases and molds, and relatively uncomplicated to keep.

Bubba Kush, when grown indoors, has a flowering time of about 8-9 weeks. The buds grow to about a medium size, and the grower can expect a yield of about an estimated 15 ounces per square meter.

Ready for harvest mostly around the end of October, Bubba Kush can yield around 20 ounces per plant. It prefers a warm, dry spring time environment but can also flourish in slightly cooler settings.

What is the Bubba Kush strain yield?

How much THC does Bubba Kush have?

What are the origins of the Bubba Kush strain?

Bubba Kush was created in California, with its rumored to be created through a cross between OG Kush and Northern Lights.

Have you ever smoked or grown your own bubba kush? Please let me know what you think about this marijuana strain in the comments below.