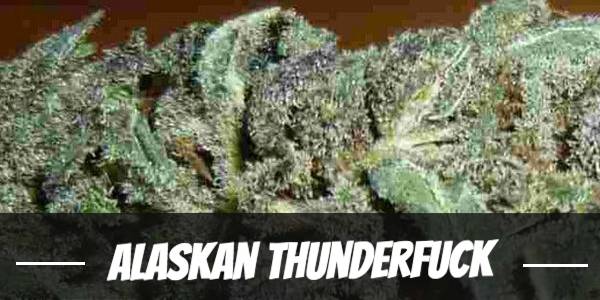 Alaskan Thunderfuck marijuana strain is a hybrid strain that creates a famous, instantaneous buzz, that can make colors seem brighter, and everything else seem happier and easier.

It is popular for its unique blend and resulting high.

This rare northern beauty will hit you like a freight train, and boasts of , often reaching a staggering 0.8%.

There are few strains out there, whose heritage is shrouded in so much mystery.

Alaskan Thunderfuck was reportedly created by mixing a North American sativa with a Russian ruderalis.

Somewhere along the way in the 1970s, there were Afghani genetics thrown into the mix and voila – the luscious cold-climate sativa Alaskan Thunderfuck was then born.

It is sometimes known as Matanuska Tundra or ATF, named after its native Matanuska Valley.

ATF will make you feel energetic, while relaxing the body and creating an uplifting and enjoyable buzz.

This sativa produces a clear high, which is why it is recommended as a daytime strain – it will inspire you to get things done, and get then done while living in a carefree little bubble.

This strain probably isn’t the most pleasantly fragrant of them all, but it does its job well.

Alaskan Thunderfuck smells like diesel and skunk, mixed with a hint of sweetness.

Some say this strain smells like cat piss, but it might best be described as pungent and earthy, with a bit of a pine-scent reminiscent of the North American forest land.

When smoked, this bud truly represents many flavors. Alaskan Thunderfuck tastes a bit the way it smell, except better.

A sweet and pungent cloud will hang in the air smelling like spicy bananas and it’s sweet earthiness will linger on your tongue.

A hint of citrus and oranges can also be detected in this special sativa.

Alaskan Thunderfuck is relatively easy on the side effects, another reason why it is special.

Occasionally you might experience a very slight bout of paranoia and nervousness, which doesn’t really last.

Dizziness and headaches may also occur in some, due to the strong CBD levels.

A case of feeling parched and having a dry mouth may occur when smoking this strain.

Alaskan Thunderfuck can also make you feel like your eyes are dry.

Keeping some liquids nearby can easily solve these adverse effects.

Medically speaking, this wonder-strain is a cure-all.

Anything from muscle spasms, to joint pains and other chronic body pain is effectively treated with this strain.

Alaskan Thunderfuck can also be used by those who suffer from mental conditions.

PTSD, depression and anxiety is alleviated with this strong sativa.

Migraines and headaches are also easily treated even with small dosages.

This strain has become truly valuable in the medical cannabis community.

Alaskan Thunderfuck is great for daytime use because it provides you with a boost of energy, leaving the patient feeling awake and focused and ready to get through their day.

The cerebral high you get from this strain is pleasant while working its magic, it will combat symptoms of fatigue and lethargy, and create a stress-free mood.

Alaskan Thunderfuck may also help those suffering from eating disorders, as it can create a healthier appetite and induce the munchies.

This strain is known to thrive in the great outdoors, most specifically in cooler, northern climates, due to its heritage.

Alaskan Thunderfuck can also produce generously when cultivated indoors, but is nothing compared to when it is grown outdoors.

Outdoor-grown Alaskan Thunderfuck can yield quite massively and will produce a beautiful looking bud, that is covered in crystals and pretty orange hair and has a sticky, skunky smell to it.

This plant can yield an average of 16 ounces per square meter, when kept indoors.

Alaskan Thunderfuck takes about an estimate of 8-9 weeks to flower and be ready for a harvest.

When grown outdoors, this sativa is beyond generous in its yield.

Alaskan Thunderfuck can yield around an average of 32 ounces per plant, and can be expected to be ripe for plucking around the month of October.

What is the Alaskan Thunderfuck strain yield?

How much THC does Alaskan Thunderfuck have?

What are the origins of the Alaskan Thunderfuck strain?

Alaskan Thunderfuck was created from a mix between a North American Sativa, a Russian Ruderalis and an Afghani.

Have you ever smoked or grown your own Alaskan Thunderfuck? Please let me know what you think about this marijuana strain in the comments below.