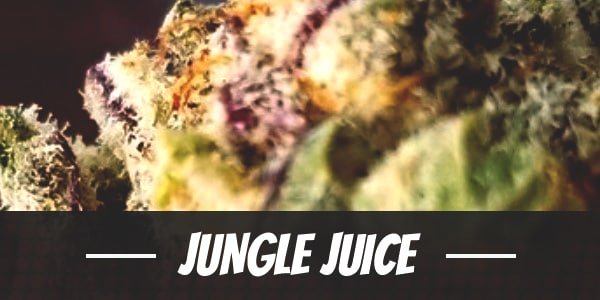 Its name alone suggests a delicious drink that brings out the flavors of the wild. And, indeed it does. Jungle Juice has a tropical jungle taste that blends together citrus and floral notes. In the palate, it explodes and swarms the mouth before delivering a reinvigorating, energizing high that lasts for hours. Eventually, the comfort each puff brings cradles users deeply like a swing tied in between branches of humongous trees.

This mighty Jungle Juice strain was developed using two staples in the cannabis industry. Tangie added a citrus flavor to its buds as well as a zesty hint of energizing creativity. Meanwhile, from the clone-only Animal Cookies, it gained its heavy body high.

A true hybrid offspring, Jungle Juice delivers a cerebrally stimulating high that later tapers into a deeply relaxing buzz that envelops users in tranquility. Its versatility extends to its THC levels as well. Ranging between 14% to 15%, it provides enough potency for both recreational and medical users to enjoy while maintaining a clear head.

As a well-balanced hybrid, Jungle Juice has the quick-acting onset of its Sativa genes and a soothing comedown influenced by its Indica parentage. Its mixture of effects make it a versatile strain that can be enjoyed by enthusiasts with different tastes in buds. Moreover, its THC levels cater to beginners seeking out a higher tolerance to the psychoactive compound and veterans who want to smoke the bud for a chill day.

Immediately after the first two to three puffs, it clears the mind of distractions. Thoughts flow and form freely into a surge of creativity that opens new perspectives. At the same time, it heightens focus so users may concentrate for longer periods of time without feeling overwhelmed by work or the projects being pursued.

Complementing the head high is a rush of energy that moves through the veins and reinvigorates the body through and through. It removes tension in its wake. Its keeps users feeling light too, like a well-oiled machine that pursues tasks relentlessly.

At the comedown, Jungle Juice plants a heaviness in the limbs that intensifies as the hours pass. The eyes begin to droop and it becomes difficult to stay awake. In all likelihood, users will drift off to dreamland hand-in-hand with Mr. Sandman.

Jungle Juice entices the nasal senses with its floral overtones accentuated by citrus undertones. There is also a subtle but barely noticeable sourness. Broken apart or combusted, its fruity scent with hints of wet soil permeate the room.

Drawn in, Jungle Juice bursts in the palate with the sweet but sour taste of ripe citrus. Enhancing it are floral notes reminiscent of lavender. On the exhale, it leaves an earthy aftertaste that lingers in the mouth for hours after the last puff.

Like other strains, Jungle Juice has cannabinoids that interfere with moisture production. Among the areas that experience mild dryness are the eyes and the mouth. Although barely noticeable, the discomfort may still be remedied by downing a few glasses of water throughout the day.

Its intense effects can be quite overwhelming too, especially when used beyond personal tolerance. It induces a subtle feeling of paranoia that can easily be avoided through pacing and moderation. Although, if one’s disposition before the high is susceptible to the issue, it is best to stay away from the bud at all.

Coming from Golden State Seeds’ medicinal farm in Mendocino County, it is not surprising for Jungle Juice to be of significant therapeutic value. It delivers a head-to-toe high that comforts users and patients from various health issues.

Among Jungle Juice’s best uses is relieving stress. Its happy high enhances the mood and stabilizes turbulent emotions. At the same time, it also makes for a great anti-depressant that helps manage mental health illnesses like depression, PTSD, and anxiety. By calming the mind, the well-balanced hybrid makes it easy to fall back into a state of tranquility.

As alluded to earlier, Jungle Juice has a body high that totally wraps the body in relaxation. Such effects can be felt beginning from the temples, whereby the strain reduces intraocular or eye pressure which develops into glaucoma when left unattended. Apart from that, it also encourages a hearty appetite as majority of the muscular contractions in the stomach are appeased.

Sleep is one of the most important aspects of the healing process, yet the most overlooked. Through its tranquilizing and stress-crushing high, Jungle Juice tucks users to bed while improving both the quality and quantity of sleep. For this reason, it is a great bedtime companion for patients suffering from insomnia.

Like other hybrid, Jungle Juice exhibits traits from its Indica and Sativa lineage. It grows tall but is quite sturdy. In a similar manner, its buds stretch on one side like a pinecone. And, although dense, it is not as compact as it still lets in air.

Growing Jungle Juice indoors will entail topping the plant early as it cramps a growing space with its height. Moreover, pruning or trimming the plant enhances overall light and air circulation around the lower nodes while also improving nutrient distribution. This will also prevent moisture stuck in between its crevices from developing into mold or mildew. Such practices improve plant health and, therefore, heighten its resistance against disease carrying pests.

TIP: Looking to buy seeds like Jungle Juice? Check out my seed shop

Growers may also opt for the Screen of Green method which weaves branches into its net or the Sea of Green that maximizes the hormones plants produce when placed closely together. Either way, it will create more colas or budding sites for higher yields.

Outdoors, it is necessary to employ a temporary enclosing during unfavorable or harsh weather. Strong winds may topple the plant or break its branches. On the other hand, frost will instantly kill it. Placing a windbreaker will shield Jungle Juice as well as better circulate warmth during the winter.

Jungle Juice has an indoor flowering period of 8 to 10 weeks. It produces 12 to 14 ounces of buds per square meter once ready for harvest.

Garden Jungle Juice flowers from the second to the last week of October. Once mature, each plant yields at least 14 ounces of buds. Under the care of a seasoned grower, it can produce even more.

Have you ever smoked or grown your own Jungle Juice? Please let me know what you think about this marijuana strain in the comments below.