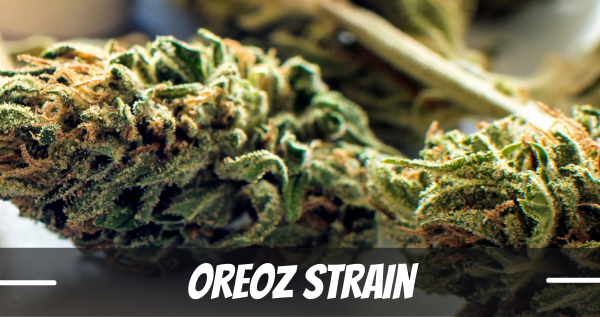 What do you get when you cross Cookies and Cream with Secret Weapon? A delicious and potent hybrid marijuana strain named Oreoz (aka Oreos and Oreo Cookies). Though the name may suggest it’s little more than a tasty afternoon treat, the Oreoz strain is mouth-watering for more than just its sweet and pungent flavor.

Oreoz THC levels start at 21% with nowhere to go but up. You can say the same about its high, which can sweep even veteran users off their feet.

Parent strains Cookies and Cream (aka Cookies N Cream) and Secret Weapon, both known for their above-average THC content (20% and 22% respectively), would be proud of the heights their descendant has achieved.

Oreoz generally averages 22%-23% but regularly maxes out at levels of up to 33%.

Though Oreoz has inherited much of its tempting flavor and desirable effects, its robust terpene profile plays a prime role in what gives this strain its strong appeal among users.

The terpene profile includes caryophyllene, limonene, and myrcene, along with humulene, bisabolol, and phellandrene.

The combined efforts of this terpene profile are what create a user experience that is enjoyable, therapeutic, and unlike any other. The caryophyllene, bisabolol, and phellandrene are responsible for most of the flavor of the weed.

Between the fragrance, flavor, terpene profile, THC and effects, it’s clear that Oreoz is chock-full of that good stuff we seek.

Experienced users who have built up a bit of a tolerance for THC will find themselves feeling like newbies again. The strain delivers a euphoric, hard-hitting high that lasts longer than most. Not that you’ll mind – once this one gets a hold of you, you won’t want the journey to end.

And neither will your body – it’ll be too busy enjoying that pain-free, stress-free feeling that Oreoz brings. Say goodbye to the weight of chronic stress, anxiety, and depression, and hello to happy, creative, and uplifting thoughts. If you’re prone to social anxiety, Oreoz will have you talking, laughing, and relaxing in no time.

Oreoz settles into your head and body with equal force, getting more and more potent with each dose. Most users describe it as being a weird combination of relaxed energy.

You’re not going to be running any marathons or conquering major to-do lists, but you won’t be glued to the couch, unable to think. You’ll be calm, relaxed, and at peace but still moderately focused and functional.

Physically you’ll feel a tingling sensation throughout your body with a heaviness behind your eyes – a great combination to send you off to sleep (when you’re ready). In addition to insomnia and restless sleep, Oreoz is great for stomach issues.

If you’re planning on growing this strain, you’ll be happy to know that its aroma, while pungent, is alluring from the start. It’s a culmination of sweet and spicy earth scents, marked by notes of pepper, herbs, nuttiness, vanilla, and cocoa.

One whiff, and you’ll instantly understand why the strain shares its name with the famous cookie. The main fragrance profile of creamy, chocolaty goodness is accented with a punch of diesel to honor the power of the strain.

If an oreo cookie were a type of food grown directly from the earth, it would taste like this. A layer of fresh dirt coats the blend of creamy, milky, sugary chocolate, but in a good way.

The strain starts with sweet and earthy notes, pulling you into comfortable nostalgia before delivering a blast of pepper, spice, and diesel. It finishes on a pungent skunky note better suited to a strain of this potency.

The Oreoz strain is a hard-hitter, which draws most veteran users. Unfortunately, that means it can be quite overwhelming for those who don’t consume as frequently or have a generally lower tolerance for THC.

Its high THC levels put you at greater risk of overdosing, leading to greening out. The high is also said to become stronger and more intense the more you consume and also lasts much longer than most strains. You must use this one in small, controlled doses.

In addition to greening out, which can leave you feeling physically ill, over-consumption can lead to couch-lock and mental fog. Unless you want to spend the rest of your day living the life of a zombie, pace yourself if you’re not yet familiar with this strain.

Use it later in the evening when you have little more to do than laze around or watch a good movie. Keep water nearby to ease the symptoms of dry mouth and thirst, and get plenty of snacks. You’ll experience a case of the munchies like you’ve never experienced before, so don’t skimp on the snacks.

Growing information is quite limited, but those who have tried their hand at cultivating Oreoz strain seeds have said it’s moderately easy to do.

The plant itself doesn’t require too much space, reaching a height of less than a foot (21.59cm/8.5inches). It can be grown indoors, outdoors, and in a greenhouse.

The plant is sturdy with a high level of resistance. We don’t know much about the plant’s preferred climate, though some cultivators say it likes warm to hot temperatures of around 77℉ and humidity levels of roughly 75%.

This data ties in with its genetics, with parent strain Cookies & Cream preferring Mediterranean climates (warm and humid temperatures). Some also say a more temperate environment can give good results, though little evidence supports this.

Oreoz strain seeds develop as beautiful plants with deep green leaves that appear almost black. The darkness of the leaves contrasts vividly against the buds, which exhibit shades of neon green and purple, finished off with a scattering of burnt orange pistils.

The buds are long, lumpy, and dense and, though yields are modest compared to most, will be overflowing with sticky, resinous trichomes when cultivated to their full potential.

Download my free marijuana Grow bible so you can grow your own Oreoz strain!

Some cultivators have reported a flowering time of just 53 days, but it usually takes closer to 9 weeks. The harvest time is around 64 days.

The Oreoz strain flowering time is usually 65 days indoors. Yields are between 1 and 2 OZ/FT2.

Outdoor yields are anywhere from 10 to 15 oz/plant. There’s no firm data on the Oreoz strain flowering time outdoors, but it’s likely late September to early October, much like parent strain Cookies and Cream.

There’s no firm information on who originally bred the strain, but many give creator rights to 3rd Coast Genetics (aka Max Yields).

Is Oreoz indica or sativa?

Oreoz is a hybrid strain with both indica and sativa traits. Because data differs between sources, the exact indica/sativa ratio is hard to pin down. It can be 70% indica 30% sativa, 60% indica 40% sativa, or an equal 50:50. Regardless of the actual split, most consider this a balanced hybrid strain.

What is the best growing method for Oreoz?

Though the strain can be grown indoors, outdoors, and in a greenhouse, breeders 3rd Coast Genetics recommend growing indoors. Most growers agree this is the best option.