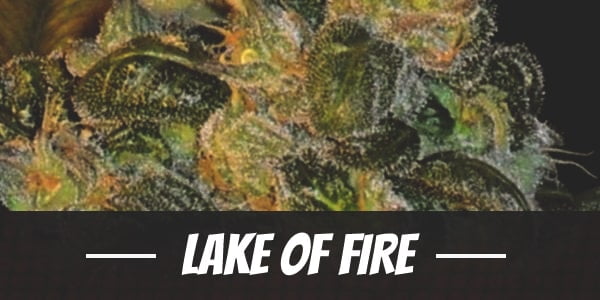 A few years ago, Gorilla Glue #4 took the world by storm – immediately catapulting it to fame. This is not surprising, after all, the strain is impressive even from afar. It glistens in the sun and catches everyone’s attention. When smoked, it delivers a hard-hitting high and ‘glues’ users to their couches.

Information about Lake of Fire:

In the hands of breeders like Red Eyed Genetics, the strain is made even better. By adding their own Kobain Kush, they successfully created a better hybrid that increased yields and even better structure in Lake of Fire.

Lake of Fire does its predecessors proud. It boasts familiar flavors reminiscent of GG #4. Its structure and vigorous grow, on the other hand, is largely influenced by Kobain Kush. Making it even more excellent is its high levels of THC, averaging between 15% to 20%, that induce cerebral psychedelic effects.

Information about Lake of Fire:

Lake of Fire is not only potent, it is also fast-acting. A single puff of its chocolate-flavored smoke is enough to deliver an energizing high throughout the body. Its initial onset, though, is marked by a euphoric rush to the mind. Each toke lifts the spirits up and leaves users beaming with happiness.

Gradually, the Indica traits of Lake of Fire begin to manifest. It starts with a tingling sensation from behind the eyes that ebbs down to the rest of the body. It reinvigorates the muscles and relaxes the users.

With the persistence of the strain’s initial cerebral effects, users stay productive throughout the day. This makes Lake of Fire the perfect wake-and-bake strain.

A potent strain, Lake of Fire is incredibly pungent. Opening its amber container is enough to fill the room with sweet, chocolate goodness. Meanwhile, its undertones are that of wood and diesel.

Drawing in Lake of Fire is like biting into berries dipped in chocolate. It is decadently sweet with surprising hints of pine. On the exhale, it leaves a diesel aftertaste accented by subtle skunky notes.

It is typical of marijuana to dry the eyes and the mouth. This is because its cannabinoids often interfere with the production of moisture in the tear ducts and salivary glands. Due to their mildness, most seasoned users ignore the symptoms. However, beginners who feel a little uncomfortable may down a glass of water to alleviate the dry spell.

In larger doses, Lake of Fire can green users out. “Greening out” is a phenomenon characterized by dizziness and keen awareness. Though rare, it can also trigger anxiety especially in users who are already prone to it. As such, marijuana should always be toked in moderation.

Despite its low CBD values, Lake of Fire has immense therapeutic value. Through the combined efforts of its THC and cannabinoids, along with its CBD, it provides a reprieve against a variety of afflictions. One of which is chronic stress.

In small amounts, stress is quite healthy. The only time it becomes a major problem is when people are constantly bombarded by it. In such cases, mental health issues are exacerbated. However, the chemical components of Lake of Fire help stabilize and enhance the mood. And, in the process, it alleviates symptoms of depression, anxiety, and even PTSD.

Meanwhile, its analgesic and anti-spasmodic properties soothe the sharp stinging pain of involuntary contractions. It can also be a great sleeping aid especially after it frees users of tension.

From its parents, Lake of Fire inherited a predominantly Indica structure. It is sturdy and can withstand problems caused by changes in weather or sudden bursts of wind. Meanwhile, its branches can carry the weight of its heavy, cone-shaped buds.

There is no reason to believe that Lake of Fire does not do well outdoors. Far from it, a well-aerated garden helps plants produce bigger, more flavorful buds. But, because of the possibility of pests, most commercial growers prefer growing their batch in controlled environments where they can easily adjust factors such as lighting and temperature.

With that said, seeds of Lake of Fire are available for sale in regular form. Apart from germinating more seeds, aspiring growers may also apply techniques such as presoaking to increase the possibility of producing more calyx-filled females. To keep them from turning into hermaphrodites, they should be exposed to Low-Stress Training methods.

Unlike other Sativa-leaning strains, Lake of Fire has a short flowering period of only 8 to 9 weeks. After the short wait, growers harvest anywhere between 12 to 16 ounces of buds per square meter.

Lake of Fire blooms from the second week of October until the third week. Once mature, it yields more than 16 ounces of buds per plant.

Have you ever smoked or grown your own Lake of Fire? Please let me know what you think about this marijuana strain in the comments below.

0 comments on “Lake of Fire Strain”