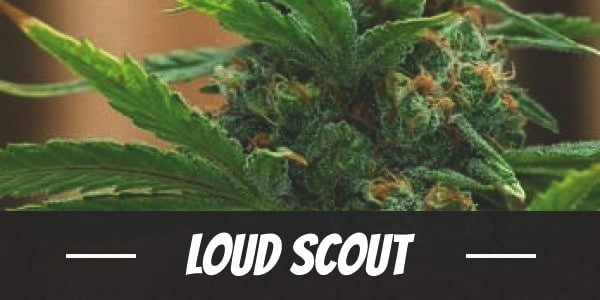 Since it won the 2012 Cannabis Cup award for Best Hybrid, Loud Scout has been in everyone’s radar. This is not at all surprising as the Indica-leaning hybrid has impressive attributes. For instance, despite its genes, it delivers an intense head high. Not only that, it is a top-grade artisan herb from Loud Seeds – one of the finest cultivators of strains.

Creating such an outstanding bud was not a difficult task. Backed by over 20 years of experience, Loud Seeds simply picked among the finest strains they have ever come across. One of which is Girl Scout Cookies, a prized herb for its impressive head high and interesting terpenes. Platinum OG was later added to the batter for its heavy-hitting body buzz. From it, Loud Scout also gained its thick coat of trichomes.

After years of development, Loud Seeds successfully created a stable strain with potent levels of THC. Luckily, the long wait was worth it as connoisseurs have given it due attention.

It is difficult to find fault in a strain like Loud Scout. Averaging between 20% to 23% THC, it is neither lacking in potency and power. In excess, it can debilitate users with its body crushing buzz. In moderation, however, it induces a surprisingly cerebral focused psychedelic high.

During the onset, a euphoric rush swarms the mind and uplifts the mood. Feeling upbeat, many users find themselves talking more than the usual. Some may even find breakthroughs at work especially as the mental stimulation encourages a free flow of profound ideas. The renewed motivation, along with the heightened sense of focus allows one to finish projects and tasks in spite of the time.

In time, a light pressure, that signifies the start of the strain’s Indica buzz, builds from between the temples. However, it does not immediately slam the body with a heaviness. Instead, it comes in waves and is kept at bay by the initial mental onset. Each toke intensifies the soothing sensation until, eventually, users become deeply relaxed.

Loud Scout has a tropical scent reminiscent of sweet berries. Meanwhile, its subtle undertones of wet soil and refreshing pine complement the herbal notes that are released once the bud is crushed up.

Loud Scout melds together the various tropical flavors of lemons, grapes, and berries. On the exhale, an unforgettable tangy sweetness lingers in the palate that leaves users wanting more.

Regardless of the strain, marijuana always causes dehydration. Most likely, users are going to end up with red eyes and, with cannabinoids interfering with the production of saliva, a cottonmouth. Some may also experience a headache. Still, all are barely noticeable and often go away with time. However, if symptoms persist, one may rehydrate by downing a glass of water or two after taking a hit of Loud Scout.

Though low, Loud Scout’s CBD level of 1% is still significantly higher than most recreational strains. And, in combination with its THC and other cannabinoids, the strain provides a reprieve against a myriad of mental and physical ailments.

As a powerful Indica-leaning strain, Loud Scout’s best use is arguably soothing physical pain. Beginning from the temples, it eases the body through and through; relieving fatigue and nausea along the way. Ironically, Loud Scout can relieve headaches just as well as it can cause it.

Its uplifting and mood enhancing effects temporarily appease symptoms of certain mental illnesses like depression and PTSD. Meanwhile, its clearheaded high allows users with ADD/ADHD to concentrate for longer periods of time.

Though Loud Scout inherited an Indica structure, it does guarantee an easy grow. Its stalks, while thick and stout, are not highly resistant against sudden drops in temperature or humidity. As such, its success heavily relies on two factors – climate and location.

Loud Seeds grow their strains organically in Barcelona, where the sunny weather rarely fluctuates and plants are exposed to long summer days. In such conditions, Loud Scout thrives and produces some of the most delicious buds in the cannabis industry.

However, for green thumbs in the northern hemisphere, cultivating the strain outdoors can be a bit of a hassle especially with the short summer and cold weather. As such, many prefer growing their plants indoors where they can easily mimic the semi-humid to warm climate of Barcelona by adjusting factors such as lighting, temperature, and humidity.

With that said, Loud Scout reacts well to the Sea of Green method. Once mature, it produces dense, green buds covered in orange hairs. Alluding to their potency is a thick coat of milky white trichomes.

To make growing a little easier for beginners, Loud Seeds sells seeds of Loud Scout in various online and local dispensaries. By providing them with feminized seeds, the original breeders assure growers of a calyx-filled batch without having to worry of turning females into hermaphrodites.

It takes anywhere between 7 to 10 weeks for Loud Scout to blossom. Once mature, it produces up to 12 ounces of buds per square meter. However, in the hands of an expert growers, yields can easily double or triple in size.

Loud Scout usually flowers by the last week of September. However, depending on the weather conditions, it may extend its blossoming period to the last week of October. Regardless, the herb produces more than 10 ounces of buds per plant.

Have you ever smoked or grown your own Loud Scout? Please let me know what you think about this marijuana strain in the comments below.