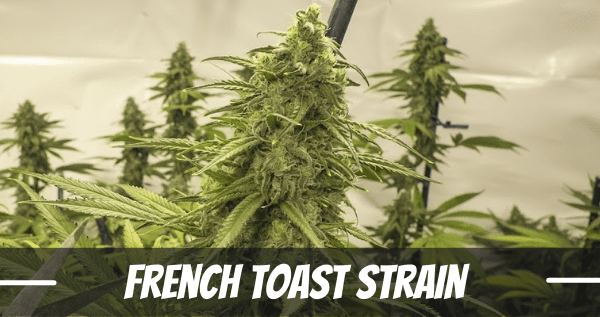 The French Toast weed strain (a.k.a French Bread) is one of those strains shrouded in debate and mystery. Results vary depending on where you go for information.

In addition to genetics, there is also debate surrounding the exact indica/sativa split. Many credit French Toast as a 50/50 hybrid, while others state a 60% indica 40% sativa ratio is more accurate.

So is the French Toast strain indica or sativa?

Well, its effects can be indica dominant or sativa leaning, depending on how you cultivate your French Toast strain seeds.

The THC content ranges from 16% to 29%. Once again, this comes down to the exact genetics of your particular seed. The terpene profile remains consistent, including myrcene, limonene, and caryophyllene.

So while you may not be able to determine the exact genetics you’re getting, you’re guaranteed a mostly balanced high loaded with plenty of feel-good properties.

The French Toast high will have you saying “ooh la la” in no time. It begins in your mind, filling you with euphoric goodness and flushing all negative and racing thoughts away.

As feelings of pure bliss settle into the depths of your soul, your mind continues to soar until you’ve reached a realm of unbridled creativity, focus, and mental clarity.

You’ll find yourself more social and uplifted, free of your usual burdens. If you ordinarily struggle to overcome the symptoms of depression, anxiety, or chronic stress, this strain provides the relief you’re seeking.

Soon a relaxed tingling sensation overtakes the body, and before long, you’ll be more physically at ease than you’ve been for a while.

Muscle spasms, headaches, joint stiffness, chronic pain, and even menstrual cramps melt away as your body succumbs to the total relaxation on offer.

Eventually, your initial focus wavers, replaced by a giddiness that often leads to giggles.

It’s a great strain to enjoy with a good circle of friends as you laze around, talking nonsense and indulging in delicious snacks until you drift into a contented slumber (even insomniacs will be snoring soundly).

The fragrance will remind you of an early morning breakfast picnic in the park. You’ll detect refreshing herbal notes with hints of sticky, sweet sugar.

Scents of nutmeg and rich cream come through to add a spicy undertone before the sugary sweetness becomes too much.

It’s got the best aromas of earth, tantalizing the senses as the taste buds get ready for the flavors to come.

Paris OG has an earthy odor infused with the smell of diesel. Hardcore cannabis users should find the blend of pinewood pleasant.

In America, it’s called French toast. In France, it’s called pain perdu. Whatever you call it, it’s delicious. The French Toast strain tastes just like a decadent breakfast on a relaxing Sunday morning.

It has earthy notes of butter, cream, vanilla, and nutmeg, with just a hint of ground coffee and fresh pine. The earthy flavors are complemented by notes of sugar, syrup, and zesty citrus.

Despite its name, many users advised against using French Toast as a morning strain. Others have said the opposite, praising its energizing effects. With so much inconsistency regarding genetics, it’s tough to know just what you’re getting.

When purchasing this strain (or its seeds), you need to ask your provider a few questions first.

Is this particular French Toast strain indica or sativa?

Is it on the high end or low end of the THC spectrum?

As said earlier in this French Toast strain review, the effects experienced vary depending on how the strain was grown, and the THC has quite a wide range (16% – 29%).

If your retailer isn’t sure of their strains’ composition, take a day off to test it first. That way, if you do find yourself couch-locked, you won’t have deadlines looming over your head.

Adverse reactions you can expect regardless of strain specifics are dry mouth, dry eyes, hunger, and thirst. Make sure to have food, water, and eye drops nearby.

Food and water can also reduce the likelihood of headaches and dizziness. Although the strain is said to have smooth flavors, it can still cause coughing due to its potency.

According to most available data, the French Toast weed strain prefers a desert-like environment and has been predominantly grown under these conditions for more than ten years. You’ll need plenty of direct sunlight with relatively low humidity levels to keep your plant happy. It’s moderately easy to grow indoors and outdoors.

If you’re growing indoors, you can achieve optimum conditions by investing in good equipment. A good lighting setup, as well as a humidity and temperature monitor, will help you keep your environment consistent. sufficient

The plant reaches a medium size and has large, broad leaves and small, grape-shaped buds. These buds display a range of neon and forest green shades with soft amber pistils and a hefty coating of frosty white trichomes.

The buds are very dense and require intervention to prevent damage due to moisture build-up, especially for the middle and lower buds. If humidity levels get too high, the plant is at risk for slow growth, mold, and bud rot.

Pruning techniques, like topping or fimming, can help improve ventilation and increase exposure to light.

Download my free marijuana Grow bible so you can grow your own French Toast strain!

Depending on the cultivator, flowering can be anywhere from 50 to 72 days.

The flowering period is usually 9-10 weeks but can be as early as 7 weeks for more experienced growers. Yields are around 1-2 OZ/FT2.

Yields are modest at 2-3 OZ/Plant and can be harvested around late October.

Is French Toast Indica or Sativa?

The French Toast strain is most commonly reported as a 50/50 hybrid that can be either indica or sativa leaning (in effects) depending on how it’s grown.

Can French Toast cause couch-lock?

Yes, especially if consumed in large amounts. The terpene myrcene is responsible for the sedating effect of marijuana, and the more myrcene a strain contains, the more likely you are to experience this effect. Your body’s tolerance to THC also comes into play.

What are some other names for French Toast strains?