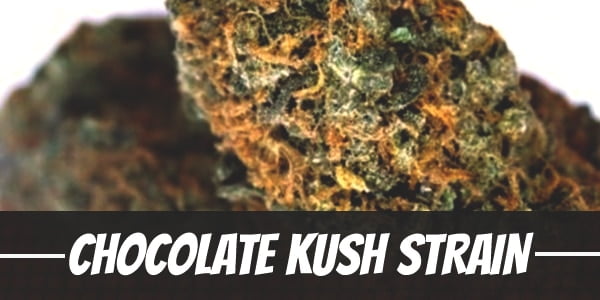 00 Seeds are fairly unique in the cannabis industry. For one, the group prefer staying in the dark and keeping a stealthy profile.

Second, its products consist only of 100% Indicas. Still, the group’s reputation precedes it.

After all, it does produce some of the best Indica strains including Chocolate Kush.

Chocolate Kush, not to be mistaken for Chocolope Kush, was born and bred in Spain.

It boasts an earthy terpene profile that reminds just about anyone of the country’s sunny villages.

However, it is its buildable potency of 14% to 28% THC that turned it into a reputable strain.

It was not difficult to create Chocolate Kush. The breeders, whose expertise lies in developing the purest of Indicas, had a wide range of choices to choose from.

And what better option is there than Mazar I Sharif and an Afghani strain? The former lent its height, impressive trichome and resin production. Meanwhile, the latter influenced its strong body high.

Chocolate Kush melts the mind and body. Because of this, it is best to avoid using the Indica during days with multiple tasks to finish.

Ideally, one should only smoke it during nights or on lazy days either as medication or as a way to relax.

Typical of Indica, Chocolate Kush creeps up on its users with a subtle rush of euphoria. Additionally, its effects gradually build up rather than hitting users with a heaviness minutes after the first few puffs.

The onset is almost always unnoticeable until it settles. And, once it does, users will feel completely uplifted.

A warm sense of euphoria wraps around the mind and ignites a creativity. It is not uncommon for the free-flowing thoughts to form into new ideas and concepts.

After about an hour or two, a light pressure dwindles down from the temples.

It is the same uplifting buzz from the onset. Only this time, it is a soothing sensation that develops into a full-blown relaxation with each puff.

In all likelihood, users who overconsume will feel glued to the couch.

Drifting off to dreamland is a possibility too. After all, the deep-seated feeling of relaxation plants a heaviness in the bones that make even opening the eyes difficult.

Chocolate Kush smells like dark chocolate accentuated by a touch of herbs. Fragrant notes of wood as well as the aroma of wet soil fills the air once the buds are crushed and combusted.

Just as pleasurable as its aroma is Chocolate Kush’s flavors. Its taste of wood is complemented by subtle notes of freshly picked herbal spices with undertones of wet soil. On the exhale, the rich aftertaste of roasted coffee washes over the mouth.

Although rare, it may also come with anxiety as sensations heighten. Most of the time, however, users only experience a light headache that goes away on its own after a few hours.

Still, it is better to avoid the reactions by smoking the bud in moderation.

A more common reaction to Chocolate Kush is the feeling of dehydration as users experience a cottonmouth and dry eyes.

After all, moisture-inhibiting cannabinoids often interfere with the salivary glands and tear ducts hence the dryness.

There are many ways to relieve the ache but, the most effective is staying hydrated throughout the day.

Coming from 00 Seeds, it is not surprising for Chocolate Kush to contain immense therapeutic value.

After all, the Spanish breeders have dedicated time and effort into the quality and potency of its Indicas.

In inducing its happy high, for example, Chocolate Kush relieves the mental burden of stress.

It calms the mind and, at the same time, it manages symptoms of depression along with other mental health issues such as PTSD or anxiety.

In high levels, THC turns into a natural painkiller. It soothes various aches and pains beginning from the temples.

Meanwhile, its anti-inflammatory properties reduce redness and swelling. In doing so, it also prevents the sudden muscular contractions that often result from the inflamed areas.

Sleep is one of the most important aspects of the healing process.

It repairs and regenerates cells that help restore people to their full capacity. And, with Chocolate Kush’s sedating properties, users have no difficulty going to bed.

00 Seeds has made Chocolate Kush available in feminized form. This not only makes the growing process easier, it also assures growers of a full batch of female plants.

As a pure Indica, Chocolate Kush is very sturdy. Its stalks do not sway when fazed with strong gusts of wind.

Meanwhile, its branches do not break off at the weight of its heavy buds.

Due to its hardy structure, it is also highly adaptable to various environments as well as fluctuations in both weather and temperatures.

One thing to remember though is that it needs constant pruning.

Its compact structure can sometimes become a breeding ground for mold or mildew as it harbors moisture brought about by humid places.

It also performs best when using the Sea of Green method.

In the outdoors, it tends to get very tall (up to 8 feet) which is an unlikely characteristic for an Indicas.

However, it retains its usual height when cultivated indoors.

It takes an average of 8 to 9 weeks for Chocolate Kush to fully bloom. Once mature, growers typically harvest a yield of 12 to 14 ounces of buds per square meter.

Garden or farm grown Chocolate Kush blossoms from the first to third week of October. Once ready for harvest, it produces more than 12 ounces of buds per plant.

Have you ever smoked or grown your own Chocolate Kush? Please let me know what you think about this marijuana strain in the comments below.