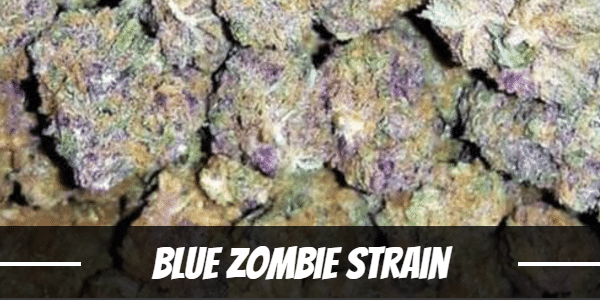 Of course, there has to be one named after the mindless creatures. Blue Zombie, no matter how strange it sounds, brings with it not only the pleasures of using. It also delivers hours of relief for those in need of respite from discomforts.

At least in the movies, there is the matter of who bit who turning one into one. But this cannabis strain, in particular, seemingly came into existence on its own. No one knows who created it. No one even knows its exact genetic lineage. Because it seems to be relatively new, we can expect a lot of theories sprouting in the coming years.

Here’s one. Some people think that one of its parent strain is Blue Dream. Meanwhile, its other parent remains unnamed. Due to its flavors, though, some suggests it could be Haze.

Notwithstanding the mystery surrounding its origin, some people swear by it. While it delivers a super relaxing sensation, it is also one that has a high value for medical cannabis users. Blue Zombie is ideal for use at the end of the day or anytime when there is nothing else to do. One thing that it can also do is to lock people on the couch as well as take them to dreamland.

A strain that has 15% THC in the past was deemed insane. But the world has changed. As more people get into the game, among the traits they focus on is in increasing the potency. Blue Zombie appears to be one of them. At up to 21%, this weed is not to mess around with especially by beginners and first-timers.

Looking to buy seeds like Blue Zombie? Check out our marijuana seed bank.

The strain does not kick in moments after using it. Instead, it creeps in after a little while which, at times, leads the misinformed to underestimate its potency. Once it does, most people are put at ease with an uplifting sensation that makes them feel happy, or even euphoric. In some cases, it may also cause sexual arousal.

For most Sativa effects, the result is a clear mind with heightened focus. Blue Zombie, on the other hand, causes a hazy mind. In other words, users are left feeling spacey. Soon, the powerful Indica side delivers an overwhelming relaxation that causes a couch-lock. As its name suggests, it turns people into zombies, in a good way, of course.

On days when there is nothing to do, or at the end of a long hard day, Blue Zombie is a perfect nightcap.

Blue Zombie emits a pungent odor with hints of skunk and fuel. It is also accompanied by a rich aroma of ground coffee and grape. Indeed, its smell is a strange concoction but the contrast has proven to be a delight.

There are many popular strains that are direct descendants of the Blue Zombie. Read our full review on White Zombie Strain

Much of its aroma carries over to its flavors. Adding a little twist, though, is the sweet note of berry that is reminiscent of the Haze. Come to think about it. It does have a skunky fragrance and taste. Does it mean that somewhere in its lineage, one of its predecessors is Skunk No. 1?

Blue Zombie is not exactly the most comfortable strains to deal with. One is that it is a creeper with extremely high THC content. Another is on the effects that it delivers, the ones people do not like.

When talking about adverse reactions, what comes to mind are dry eyes and mouth. Such is the fact of life when using marijuana. Both conditions are a given and become more pronounced if overusing.

Still, there are other concerns that potential users may want to be aware of. As the strain delivers its numbing effects, some may also feel dizzy while drowning in utter relaxation. Others may also experience an elevated level of anxiousness or feel paranoid.

Before its effects completely fade away, the first to ease of out reality is the users. Using Blue Zombie is almost guaranteed to make people sleep. On this note, we can say that insomniacs and anyone else who needs quality slumber will find this strain useful. Of course, that also includes medical marijuana users.

Looking to buy seeds like Blue Zombie? Check out our marijuana seed bank.

As mentioned earlier, it can cause the mind to be foggy or hazy. Feeling distant, stress becomes irrelevant. As such, not only do people find relief but it can also help people with depression.

A lot of people can also attest to its effectiveness in pain relief. Keep in mind, though, that any medical claim is anecdotal. It is only so because there is a lack of studies and FDA approval. But users know better.

Whoever bred the Blue Zombie has been secretive. Not much is known about its cultivation. With regards to appearance, it has dark olive buds with orange hairs. Unfortunately, that is the only thing that can plainly be seen.

Whether the seeds are available or not, it is hard to say at this time. So, we have to assume that the only way to cultivate this plant is to obtain a clipping. But even that may be elusive as well.

Nonetheless, we do have a fair idea of how it grows. The chances are high that the Blue Zombie favors a warm climate with plenty of sunshine. It does have a pungent smell, which means that even if one were to have an outdoor garden, the odor it emits might be a cause for privacy concerns.

Planting it indoor should not be a problem. Being Indica-dominant, we can expect a lateral branching, but work is needed especially in topping it early.

We expect the Blue Zombie plant to be ready for flowering beginning the seventh week. Don’t take our word for it as it is only an assumption. As for its yield, a conservative estimate places it at some 10 to 12 ounces per square meter.

Gotta admire people who can grow cannabis in the open. Not a lot have that luxury but one day, it will change as more people open up to the idea of its legalization. Each plant is likely to produce around 12 ounces of buds or more. Some people think that Blue Zombie was designed for higher yields, but that information remains classified. Flowering time outdoor is likely to fall between September and October.

What is the Blue Zombie strain yield?

How much THC does Blue Zombie have?

What are the origins of the Blue Zombie strain?

The origin of Blue Zombie strain is unknown.

Have you ever smoked or grown your own Blue Zombie? Please let me know what you think about this marijuana strain in the comments below.