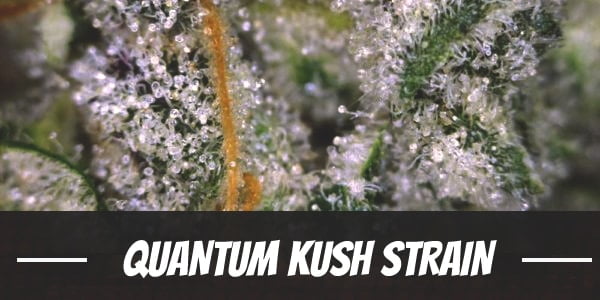 No two strain are alike. There are some that boast of high levels of potency while others would have better aroma and flavor. In the same manner, individual preference is also not the same as this would be dependent on one’s experience and tolerance.

However, when a user comes across a strain that has gained recognition for being the strongest of all the strains in the market, it is impossible not to feel a bit curious about it. After all, weed is meant to be strong enough to bring about an almost surreal experience. For a strain to be the best at doing that, it really must be worth trying out.

On that note, let us get to know more about one particular strain that has earned the title of being the strongest marijuana to date. It is called the Quantum Kush. The information below contains all the necessary data about this strain that will prove why it is hailed as such.

There seems to be a differing opinion within the cannabis community as to the first breeder of Quantum Kush. Some sources are persistent in saying that the strain was first developed by TGA Subcool Seeds. However, a few of them claim that it was the Homegrown Natural Wonders who created the original strain.

Nonetheless, all of them could agree on two things: first, Quantum Kush is a cross between the Sweet Irish Kush and Timewreck strains. Second, the strain is widely known as the strongest marijuana with THC levels that exceeds the expectations of many cannabis fans.

For anyone who wishes to experience the ultimate high from a Sativa-dominant strain, Quantum Kush is definitely the best option in the market. As mentioned, its THC levels can reach up to 30% which makes the strain extremely potent and quite inadvisable for beginners and even seasoned users with low tolerance.

As can be expected, Quantum Kush does uplift the consumer’s mood and casting a feeling of happiness. But as the effects intensify, things start to get interesting as some consumers start to feel euphoric. All is well and good at this point, but this is not where it ends. For some, the powerful cerebral high could cause them to lose focus and feel spacey.

Despite a weaker Indica side, nonetheless, the physical body high starts creeping in causing consumers to feel relaxed. In some ways, the blend of physical high is a great feature of Quantum Kush as it helps settle the cerebral high from further intensifying to the level where it becomes narcotic-like.

Overall, the Quantum Kush is a good strain for daytime or nighttime use. Considering its potency, it is better to use this strain when there are no planned activities later.

Quantum Kush in not only known for its potency and strength as it also has a complex and distinct odor. It has a pungent and sweet aroma that blends well with the earthy and skunky smell. Fortunately, the strong odor it emits is not overpowering, which might turn off some consumers.

The fact that this is the strongest cannabis strain is enough to earn it a following, regardless of how it smells or tastes. But the reality is that the sweet and woody taste to go along with its fragrance, as well as the undertone of tropical fruits and citrus makes this a delightful strain.

We are running out of superlatives of the great Quantum Kush, hence we should now look at the negative reactions from the use of this strain.

A common reaction would be dry mouth, as well as dry eyes. Both are pretty much what consumers experience using any type of cannabis strains.

Surprisingly, despite the intense high it gives, only a couple of other negative reactions were reported by a minority. It is likely for beginners and novice users to feel slightly dizzy at the onslaught of the cerebral high, and to a smaller degree, some might feel a mild headache.

To a certain degree, this strain is also useful in boosting energy slightly much like caffeine. However, this could easily be negated once the intensity of the head high leaves one spacey.

Some of the other common reasons for using Quantum Kush would be for pain relief from mild chronic pains and aches. In the case of this strain, it appears that pain management is mainly due to being distracted by the elevated mood and happiness consumers feel at the peak of its effects.

For some people, after an intense high, the high comes crashing causing one to feel sleepy. In that manner, Quantum Kush might make for a nice bedtime companion.

The little that we know of the cultivation of Quantum Kush should provide for adequate general information. This plant can be grown outdoor in a Mediterranean climate. Even better, it could also be grown indoor, including a greenhouse.

While outdoor, it could grow to as tall as 6 feet, it should be noted that the plant thrives better when topped early. This is even more important if grown inside the house as most indoor growers tend to have a small tent due to limitations of space available. Topping early to encourage the plant to grow bushier seems to lead to a better quality of harvest, but that also means they need to be supported especially when the buds appear as the vegetative growth stage ends.

If grown indoor, it takes roughly 8 to 9 weeks for the plant to be ready for harvest, by then it should have an estimated yield of 16 to 20 ounces per square meter.

Outdoor, due to limited information, the best estimate we could give would be around 24 ounces per plant.

What is the Quantum Kush strain yield?

How much THC does Quantum Kush have?

What are the origins of the Quantum Kush strain?

Quantum Kush was created from a mix between Sweet Irish Kush and Timewreck.

Have you ever smoked or grown your own Quantum Kush? Please let me know what you think about this marijuana strain in the comments below.