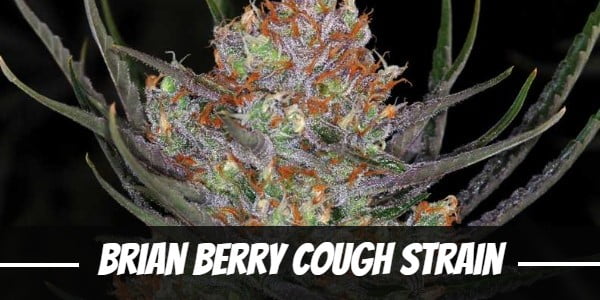 Brian Berry Cough has, perhaps, one of the most heart-wrenching stories in the cannabis industry.

It was developed by MzJill, TGA Subcool’s wife, for a long-time friend who suffered from the neurodegenerative diseased ALS.

Sadly, by the time the first batch was harvested, time was running out quickly.

Just two days after taking his first smoke of his tribute strain, Brian succumbed to the disease and took his last breath.

At the same time, it brings hope to patients suffering from pain and worries albeit temporary.

In developing the strain, MzJill took a variety of Strawberry Cough named Kyle Kushman for its heavy-hitting Indica buzz.

Space Queen was later added for its quick-acting cerebral buzz.

The resulting strain is not lacking in terpenes too. In fact, it explodes in the mouth with fruity flavors reminiscent of cherry and berries.

The well-balanced hybrid ushers in a great experience that helps patients find peace despite great pains.

Get Seed Deals
* 10 is the highest

Brian Berry Cough brings out the best qualities of its genes. For one, it has a quick-acting high that delivers a rush of euphoria almost immediately after the first few puffs.

Eventually, as the psychedelic buzz continues, it leaves the body feeling lighter and more agile.

During the initial onset, it inspires a sense of happiness that leaves users feeling upbeat throughout the day.

In better moods, it is not uncommon for one to lie comfortably on the couch while feeling subtly at peace with bliss.

Although, if others prefer it, it can also be a great wake-and-bake or recreational strain.

With time, a warm and fuzzy sensation later manifests beginning from the temples.

As it spreads throughout the rest of the body, it soothes the muscles until users feel free of tension or tightness.

Like walking on air, the intense buzz motivates one to go through tasks from a to-do list.

Because it is a hybrid strain, Brian Berry Cough can be enjoyed at any time of the day.

It has the high-velocity cerebral buzz paired with a soothing body high that develops into full-blown relaxation as the hours pass.

Overtones of cherries, as well as citrus, introduce itself by filling the room with its fruity scent. On the exhale, it turns into a strong note of wet soil.

A blend of cherries and mixed berries fill the palate once a puff of Brian Berry Cough’s smoke is drawn.

It is sweet with a hint of citrus. On the exhale, it leaves an earthy aftertaste that lingers for hours in the mouth.

Brian Berry Cough can be a bit overbearing depending on how one chooses to use it.

Most of the time, it will only cause a cottonmouth and dry eyes which can be managed by downing a few glasses of water.

But, although rare, it can also trigger anxiety and paranoia among users who consume beyond individual tolerance.

This is especially true for people who are prone to such side effects. For this reason, it is important to use the bud in moderation.

As alluded to earlier, the strain is a tribute to Brian who lost his battle with ALS just two days after taking a few swigs of the first harvest.

For this reason, it is a source of comfort to patients suffering from mental and physical afflictions.

Among its many features is its ability to enhance the mood. In doing so, it relieves users of the overwhelming dread that stress brings.

As an anti-emetic, it also prevents the stomach from cramping and causing users to vomit. As such, it is a wonderful companion against the nauseating effects of chemotherapy.

Brian Berry Cough has a propensity for growing tall like a Sativa-dominant plant.

As such, it may be a burden for indoor growers without much vertical space to spare. In such cases, it is best to prune the apex to keep the plant short.

Outdoor cultivators may also do the same to encourage more colas to sprout, especially when paired with the Sea or Screen of Green method.

Feeding the plant with the right proportions for Nitrogen (N), Phosporous (P), and Potassium (K) during different stages of the growing stage will keep the plant healthy and prevent it from suffering a nutrient burn.

Meanwhile, supplementing it with adequate light and air will further improve its yields and health.

Controlling the smell of this strain is essential for discreet growers. When flowering, it tends to become really pungent.

Even one plant can fill a whole space with its smell. However, one can reduce or completely remove the scent by installing odor control measures like carbon filters.

Shades of green and, sometimes, purple add visual appeal along with long amber hairs. The thick layer of sticky resin that oozes from its buds are also visible.

To make the plant more accessible, TGA Subcool and MzJill Genetics has released it in feminized form.

In this way, medicinal propagators of marijuana are assured of a full female batch with every grow.

Harvest usually comes 8 to 9 weeks after initiating the flowering period. Growers usually harvest between 12 to 14 ounces of buds per square meter once the plants are fully mature.

Outdoor grown Brian Berry Cough blooms from the last week of September to early October. Depending on the weather, it can sometimes extend by another week or two. Regardless, it will yield at least14 ounces of buds per plant.

What is the Brian Berry Cough strain yield?

How much THC does Brian Berry Cough have?

What are the origins of the Brian Berry Cough strain?

Brian Berry Cough was created from a mix between Strawberry Cough and Space Queen.

Have you ever smoked or grown your own Brian Berry Cough? Please let me know what you think about this marijuana strain in the comments below.