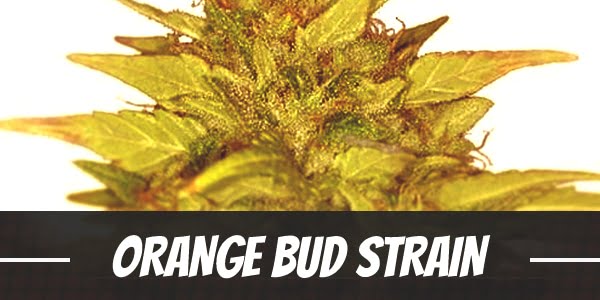 Orange Bud strain has to be one of the all-time classics when it comes to anything and everything. From color to its smell and taste, it has made its mark in the daily lives of people. As such, it is not far-fetched to think that it could also make its mark in the world of cannabis. Orange Bud, the indica-dominant marijuana strain, technically has nothing to do with orange, the fruit.

Even if it is genetically unrelated, some of their benefits are similar. For instance, a glass of cold orange provides for a calming and relaxing feeling on a hot sunny day. Orange Bud does that too and so much more.

From what we could gather, Orange Bud appears to trace its origin from California. It then made its way to the infamous coffee shops in Amsterdam during the 80s. Since then, it has become one of the favorite strains of many marijuana users.

As far as we know, it is the result of backcrossing Skunk No. 1, one of the premier strains in the world. Of course, we cannot be sure as others have stated it is a cross between to Skunk lines.

Orange was named as such for some reasons – one is due to the bright orange hairs covering its buds. Another is the apparent influence it has on its scent and taste. It suggests that these are traits inherited from the predecessors of Skunk No. 1 – possibly the landrace Mexican Sativa.

At any rate, Orange Bud has made a name for itself culminated by placing second in the Bio category of the 1994 High Times Cannabis Cup.

Orange Bud is one of the gentler marijuana strains in the world. Still, it does contain at least 16% THC, which makes it potent. Keep in mind too that in some tests, some batches have tested to have as high as 23%. Of course, this is mainly dependent on the quality of the seeds and the grower, as well as a host of other factors.

Balancing the cerebral high is the physical buzz that can alleviate the symptoms of pains. Hence, patients with chronic illness may find comfort with Orange Bud.

Like the fruit itself, Orange Bud manifests its presence with a mild uplifting sensation that builds up over time. From the general feeling of happiness, some users may start to feel euphoric. All this time, it induces creative thinking and mental alertness. In a social circle, talks can go from one topic to another, one idea after another. In general, users also tend to feel more energetic. As one can imagine, the effects of the strain help make for a livelier conversation.

After an hour, by this time, the Indica properties of Orange Bud would have already exerted its influence on the body. Besides feeling completely at ease, some may also start to show signs of slowing down.

Some Sativa-dominant strains can cause a foggy mind rendering one practically immobile. Although Orange Bud does not have that kind of effect, it is the physical body high that pulls users down. For some in a state of complete relaxation, they may feel reluctant to do pretty much anything at all. In other words, it can cause some to feel lazy and prefer to sit or lie still – that is likely if one were to overuse.

From a line of Skunks, then we have to assume that it will have a dank earthy and skunky scent. And it is here where it is surprising because that is barely distinguishable. As its name implies, it has a strong note of orange.

Where it lacks in smell, the skunky note is more pronounced in the flavors. Coming with a strong note of citrusy orange, anyone using Orange Bud will find it a delight.

Orange Bud is both energizing and relaxing. Still, a few people may find themselves feeling a little bit more anxious or paranoid. It does not often happen, though. Also, some people may also experience a mild headache. At any rate, such conditions are not permanent, and they are usually negligible.

In most cases, when people use too much, the most common adverse effects are having dry mouth and eyes. Like the other conditions, these do not pose long-term dangers.

One of the most useful benefits of Orange Bud for medical cannabis users is in its ability to squash stress. Because of its dominant Sativa side, it comes with significant mood-altering properties that uplift the spirit. For that reason, even people with other issues such as depression, PTSD, ADD/ADHD can benefit from its use.

Once Orange Bud begins to settle down, most people tend to feel hungry. In this way, the strain is useful in stimulating the appetite.

Orange Bud is a typical Indica type plant that grows up to around 3-1/2 feet. It thrives in both outdoor and indoor environments. Furthermore, most people should have no trouble cultivating it including the beginners.

The preferred method of growing cannabis for most people is indoor. Be that as it may, a hydroponic setup combined with Screen of Green or Sea of Green training techniques will vastly improve its growth and yield.

Orange Bud is a strain used not only for its relaxing and euphoric effects, but it also promotes creativity in its users, and helps them clear their minds to focus on tasks with the right dose. If you’re someone who seeks both of these effects in a strain, then make sure to check our Orange Bud seeds in the ILGM seed shop.

After eight weeks, growers can trigger the flowering stage. Under 600 watts lighting, Orange Bud can produce around 14 ounces.

In its natural environment where there is a lot of sunshine, each plant can produce 14 ounces and possibly more. Orange Bud should begin flowering during the first week of October.

What is the Orange Bud strain yield?

How much THC does Orange Bud have?

What are the origins of the Orange Bud strain?

Orange Bud was created from the mix between Skunk #1 and a possible landrace Mexican sativa.

Have you ever smoked or grown your own Orange Bud? Please let me know what you think about this marijuana strain in the comments below.

Almost made me miss California

I picked up some of this in Thailand,because the smell reminded me of what I used to get in San Francisco, and it was reasonablt priced (not the highest priced). (for the record, 500 baht per gram, or $46/eighth-ounce.

Two hits and I was in the zone. I felt energetic but a little lost (LOL).I don’t need anything stronger, and the taste/smell are heavenly.