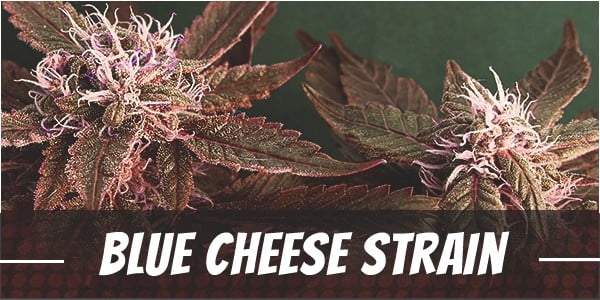 A classic sweet-savory sandwich, Blue Cheese strain is a winner for so many reasons. With the unique taste and feel of this strain, Blue Cheese is guaranteed to stay a favorite among the medical and recreational users alike.

Blue Cheese in a hybrid with potent indica properties that was originated in Europe. This strain is the result of a crossing of UK Cheese and Blueberry, and resulted in a pleasant balance of relaxation without the drowsiness.

With consistently elevated THC levels that can go well beyond 20%, Blue Cheese can be counted on to give a solid, full bodied high.

This plant is favored in the medical cannabis community because of its ability to help soothe many mental and physical ailments and pains.

Blue Cheese is guaranteed to set off a joyfully cerebral experience. Its talents lie in its ability to create a light sense of euphoria, where the happy vibrations are at their maximum. Unique in so many ways, this strain is guaranteed to give you a great time.

This strain creeps up on you slowly and lodges itself into your cerebral senses, bringing on the happy chemicals. The high from Blue Cheese is generally mellow, with bursts of energy, and definitely does its job at unwinding and inducing a simplified state of relaxation.

If you are looking for a strain that can make you feel like you are wrapped tightly in a blanket of your favorite foods, then Blue Cheese is the one for you.

In some cases, Blue Cheese can create a sense of hunger, bringing on the munchies and making food taste extra refined.

This strain is known for being so dank, it can almost be considered as borderline stinky. Its savory cheesy whiff mixed with the pungent sweetness of blueberry is guaranteed to stir up emotions in you.

Blue Cheese is something very different in terms of aroma, but it is a fragrance that will appeal to you without you knowing why.

Just like its scent, Blue Cheese’s flavors are something for the books. There is something very special and interesting about mixing the pungent aroma of cheese with the delicate sweetness of blueberry.

Blueberry is a cult strain that has been popular for as long as anyone can remember. This powerful Indica creates a distinct euphoric high, mixed in with a fragrant and mouthwatering bud. Read our full review

Incredibly, the mix of those two variants does create a sensational flavor that resembles the aromatic cheese it was named after.

This clear indica has surprisingly few side effects. For users who aren’t used to strong potent strains, it might create a mild sensation of feeling paranoid and anxious. Dizziness can also be observed in some cases, but relatively rarely.

This strain doesn’t have the tendency to put you to sleep, because of the fact that it isn’t 100% indica. However, often, cottonmouth and dry eyes can be an unwelcome adverse reaction to this above average strain.

Blue Cheese is a strain that has been recommended for the treatment of anxiety disorders, proving to be quite successful in controlling the symptoms of PTSD and bipolar disorder. ADHD and ADD may also be treated with this invigorating and healing strain.

Stress and depression are also commonly treated with the regular use of strains such as Blue Cheese. For some patients, especially those who are suffering from major chronic pain problems, Blue Cheese may help reduce the stress that comes with these pains, and help numb the pain itself.

Because Blue Cheese has a strong sativa presence to complement the indica in the strain, it serves as the perfect strain to relax and unwind to, without putting your body to sleep.

As a bonus, this strain will leave a sort of afterglow on you that will keep the happy vibes lingering in your system.

Download my free Grow Bible and start growing your own Blue Cheese!

It has also been highly touted for being effective in the treatment for persistent and chronic pains. This strain is a powerful healer of muscle spasms and chronic back pains, allowing the patient a more blissful way of treating their ailments.

This highly fragrant strain deserved its popularity. It is easy to grow, with the plant being naturally resistant to mold. This plant, unlike many of its cousins, prefers a slightly cooler environment to thrive in. When kept happy, this strain can yield a relatively average to high yield.

Blue Cheese produces an average yield indoors, estimating at about 18 ounces per square meter. This strain takes an estimated 8 to 9 weeks to flower and be ready for harvest.

When cultivated outdoors, this strain, which prefers a little less heat and more light breeze, is usually ready for harvest around the end of September. Each harvest, one can expect a yield of about 19 ounces per plant.

What is the Blue Cheese strain yield?

How much THC does Blue Cheese strain have?

What are the origins of the Blue Cheese strain?

Blue Cheese originated in Europe, and was the result of crossing UK Cheese with Blueberry.

Have you ever smoked or grown your own Blue Cheese? Please let me know what you think about this marijuana strain in the comments below.