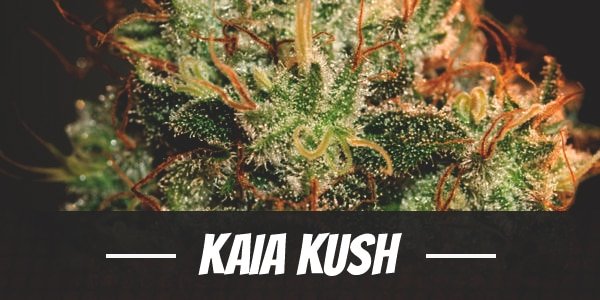 Kaia Kush is the 2007 High Times Cannabis Cup champion. For many people, that is more than good enough to know. Up next, get it into the system and get high.

What many do not realize, though, is that two seed companies are selling its seeds. In most sources, Apothecary Genetics takes the credit for breeding it. Another group, Green House Seeds is also selling feminized seeds.

At its core, Kaia Kush originated from Super Silver Haze and OG Kush.

A creation of Green House Seeds, Super Silver Haze is a very well-regarded strain having won the Cannabis Cup several times. It is not surprising as it is, after all, a three-way cross between Skunk, Northern Lights, and Haze. All these strains are also very well regarded and legends in their own rights. OG Kush, on the other hand, is a legendary classic that has bred countless others in West Coast.

Kaia Kush, if on the basis of its lineage alone, is royalty. In fact, not a lot of strains can even come close to its excessively prestigious origin.

Even as we focus more on Kaia Kush from Apothecary Genetics, the one from Green House Seeds is not that much different except production. We will have more of that in another section.

Suffice to say, Kaia Kush is a slow starter, but it does deliver a satisfying experience that also comes with incredible medical benefits.

As mentioned earlier, Kaia Kush is a slow starter. But it more than makes up as the effects kick in. At times, it may feel deceptively weak, but the soothing effect it has is a testament to the quality of its traits considering that it does contain some 20% THC.

For many people, soon after using this strain, there is a very subtle rush that is both pleasant and lacking. As a result, some may start to double up on their consumption – and that is not exactly a great idea.

It takes a while before the users even feel its effects slowly increase in intensity. It is as if the strain keeps generating force while holding out as long as it can before finally letting loose its full power. Once it kicks in, it does so hard. The maddening euphoric high is accompanied by an electrically-charged sensation that results in feeling tingly all over the body.

In many cases, too, users feel energized and motivated. Even better, the mind clears and most find themselves able to focus on their tasks.

Kaia Kush is not done, though. The Sativa effects on the mind and behavior are soon joined by a massive sense of relaxation. In spite of that, users continue to do as they please.

But the physical effects are relentless. As it continues to send waves after waves of soothing calm, many users soon start to find themselves locked on the couch. As they drown in the relaxing effects of Kaia Kush, their mind remains clear.

From such a prestigious line, we can also expect Kaia Kush to have a very enticing aroma. Making it attractive is the note of citrusy lemon it emits.

While aroma alone is more than enough to entice people to use it, Kaia Kush is also a mouthwatering strain that blends the lemony flavor with herbs and lime. Adding to the exotic but pleasant taste is a mild tangy note.

For people who are already going through anxiety issues, keep in mind that Kaia Kush can actually cause a slight increase. Not only that, but it can also cause a few to feel a little bit paranoid.

Once the full effects of the strain kick in, there is also a high chance that some users feel a little dizzy.

Other than the side effects mentioned above, Kai Kush is marijuana. Hence, the typical experiences such as dry mouth and eyes can also be expected.

All these adverse effects do not cause long-term harm. In fact, they only last briefly. Also, they occur mostly as a result of overusing.

Kaia Kush delivers an incredible experience to medical cannabis users. The same traits are also the ones that make it valuable in a few medicinal purposes.

One is in helping people having mental issues. For instance, it helps relieve stress and depression.

Another is in the way it takes the mind away from trouble. Add to that its relaxing effect on the body. Hence, it can be used for pain relief.

Having one or two male plants in a batch of seeds is a nuisance. And if growers were not vigilant, then these males will destroy the chances of harvesting its buds.

Kaia Kush is also not a picky strain where it can only grow in one specific place. Instead, it thrives well both indoors and outdoors.

For growers choosing to cultivate it inside the house, know that it adapts well to the Screen of Green training method.

Within 9 to 10 weeks, Kaia Kush is ready for the next phase. During harvest, each square meter can product 7 to 14 ounces of buds. The feminized seed version from Green House Seeds, though, results in a much higher yield. In some estimates, it can be a much as 28 ounces.

Like indoor, the strain can also produce an abundant yield of 36 ounces per plant. If the batch is from Apothecary Genetics, then it will likely create 14 ounces or more. But if it came from Green House seeds, then it can produce more than twice as much.

Have you ever smoked or grown your own Kaia Kush? Please let me know what you think about this marijuana strain in the comments below.