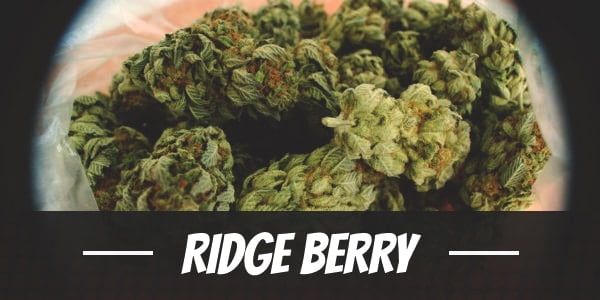 Well, not all strains are available, and if they are, not all are available in seed form. In fact, some are proprietary. Hence, even getting a clipping is impossible. One such strain is the Ridge Berry.

By all accounts, it is a product of Marley Natural. Of course, we checked their website but could not find any information at all. In fact, there is not much to know about this strain. Not all, anyway.

Ridge Berry is an offspring of two notable hybrids.

Chem’s Sister (Chem’s Sis) is a phenotype of the familiar Chemdawg. Notable for their potency and powerful Sativa effects, this is a trait shared to Ridge Berry. Sour Dubble, on the other hand, has a more balanced cerebral and physical effects.

On its availability, as mentioned, it does not appear to be available at the moment.

Where there is a ridge, then there is a trough. If one were to think of the sea waves, the crest or the ridge is at the highest point. At its lowest elevation, that is the trough. Ridge Berry is like that. The adventure begins when it ushers users into high waves before crashing down. To be clear, we did not intend the analogy to sound ominous. Far from it, we wanted to highlight the two distinct benefits of this strain.

There are no tests done that we know of on the chemical compound of Ridge Berry. As such, we do not know how much THC and CBD it has. But by all accounts, this strain is very potent.

As soon as one begins using it, a euphoric sensation comes crashing into the mind and the body. As if washed away in the sea, users reach the ridge and stay there for a while. Not only does one feel elated, but they also absorb the energy transferred. Energized and with a clear head, they are able to do their tasks.

Even at the height of the cerebral effects, Ridge Berry does not take one over the edge. Often, users also feel motivated and very focused. There is none of the narcotic-like mental confusion caused by a few other strains.

For most people, too, the strain makes them feel very sociable and jolly. So, it is not surprising to see its users giggling and laughing a tad bit too much.

Even if it is Sativa-dominant, never underestimate the potency of its Indica side. From the crest, it pulls one down to the trough. From being energetic, it overwhelms the body putting one into a state of utter bliss. It calms the muscles and releases the tensions.

Still, the mind remains sharp, and users can even complete their tasks. Another way to think of the physical effects is that it helps keep the cerebral high in check. No one falls off from the ridge.

The Ridge Berry, as one can guess, emits the scent of berries. It has a hint of herbs and peppery spice. Even without using it, on its aroma alone, it already sets the tone for a relaxing experience. But first, users need to get on the ridge first.

The same aroma this strain has carries over to its taste. It does have a slight dank note that enhances its exotic flavors.

Anytime a cannabis strain is very potent, and especially a Sativa-dominant one, then there is a chance that some people may feel dizzy. At the same time, because it is cannabis, then one can also expect to experience having dry mouth and eyes.

Regardless, the best way to use an unfamiliar strain is to consume a tiny amount. Otherwise, the above-mentioned adverse reactions are likely to occur.

One more thing, as there is not much information available, there may be other concerns that we are not aware of.

On some accounts, one of the things Ridge Berry can do is to make people have the munchies. In other words, most users end up eating some food. As such, it can be useful to people who are having trouble eating well. Besides food, another benefit is that it seems to work well in managing nausea.

Feeling euphoric and oozing with energy, if there is anything Ridge Berry can crash, then it is stress. Once discarded, even people with depression should find it easier now to manage. It may also be useful for other mental health disorders including PTSD, ADD and ADHD.

The heavy Indica hit it induces, on the other hand, gives comfort to the people in pain. It is also not only due to the physical effects, but more so because of the mental effects and mood-alteration.

It appears that the original breeder has chosen not to disclose this information. About the only thing we know, at this time, is that the buds have a spade-shape and is covered with orange hairs and crystalline trichomes.

Although the clone-only strain has remained elusive, we can estimate its flowering time to be around 8 to 9 weeks. This is evident in its lineage. As for its production, the expected yield per square meter should be in the range of 12 to 14 ounces.

Outdoors
Growing Ridge Berry outdoors, the flowering time should fall between September and October. While the estimated yield per plant is at least 14 ounces, it is also notable that one strain in its lineage, Sour Diesel (more like a grandfather) can produce twice as much.

Have you ever smoked or grown your own Ridge Berry? Please let me know what you think about this marijuana strain in the comments below.