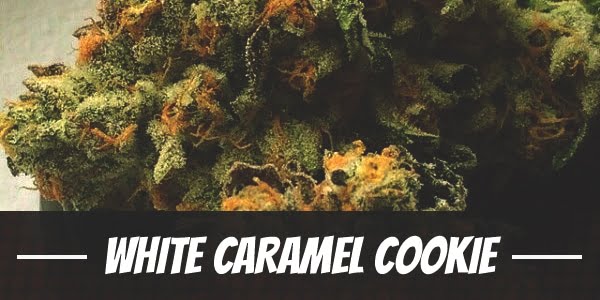 Delicious is the only way to describe White Caramel Cookie. Not only is it delightful to the throat, but it also has a divine scent. But make no mistake, this strain is among the most potent in the world.

It does not cause one to feel energetic and hyperactive, rather, what it delivers is a sedating effect. As such, it not only appeals to recreational users, it is also ideal for patients.

Both Wookie and Purckle are not as popular as their predecessors. But that is not to say they are underwhelming. Looking at the genetic lineage, one can say these two strains are elite. As such, living up to expectations is more difficult for the White Caramel Cookie than others.

But as proven by its users, the one thing it does well, it does so with unmatched efficiency.

For many strains, the effects usually begin with a cerebral high and then followed by the physical effects. In a way, that is the experience users feel when using White Caramel Cookie. But what is different is in the way both the Sativa and Indica traits seem to work at the same time.

At its onset, a euphoric sensation rushes into the mind and the body. Keep in mind that at this point, the full body effects have not kicked in yet. Feeling a little bit more energetic, many people may find themselves a little talkative. The uplifting sensation, no doubt, is also due to the mild body effects of the strain.

There are also people who reported feeling sexual arousal after using White Caramel Cookie. Used by couples, that may be all well and good, except that once the full effects of the Indica side crash in, there are only two things that can happen.

One is that users continue to function. In other words, it does not lead to a couch-lock. Another thing that can happen, too, is crashing. Usually, this is a result of not being able to handle the potency of the strain. Some people do have a low tolerance while others may simply have misjudged White Caramel Cookie and overindulged.

Having mentioned overindulging, it is not entirely the fault of the users. After all, this strain comes with a scent that many believe to be among the best smelling in the world of cannabis. The note of grape mixing in with the smell of fresh earth that is reminiscent of being in a garden is too enticing that it is hard not to hurry up and use the weed.

Matching it incredibly delightful aroma, the White Caramel Cookie is also delicious. The concoction of coffee and grape with a nutty tone can just as easily entice the users to consume a tad bit more. Resist, or else.

So, what happens if some people did use a little bit too much? In most cases, they are likely rendered immobile. It is not exactly a bad thing though. That is because they are also backing in the soothing and intense sensations.

However, as is the case with using other cannabis strains, this one does cause dry mouth and eyes.

One way to prevent or lessen the negative effects, use this weed in small amounts only.

Not much data has been gathered, so the figures in the table do not reflect the majority.

Based on its traits and the intensity of its potency, we can say that the While Caramel Cookie is ideal for reducing stress and depression.

It can also provide relief to people with chronic illnesses. When one considers the soothing and relaxing feeling it induces, as well as its sedative-like traits, it is likely useful for pain relief and management of muscle spasms.

Another thing that one can expect from its use is that it causes people to feel very hungry. Either the users eat something at the height of the effects, or chooses to do so at a later date, it is their right.

White Caramel Cookie thrives in both indoor and outdoor conditions. Furthermore, it is easy to grow. So, that is the great news for novice and especially beginners.

In the garden, the plant can grow as tall as 6-1/2 feet. Meanwhile, if planted inside the house, then it can be between 2-1/2 to 4 feet tall. Growers should consider topping it early to manage its height especially if space is a premium.

In only 8 to 9 weeks, White Caramel Cookie is ready for flowering. With more outward growth, careful trimming and pruning to allow for maximum light exposure, it can produce anywhere from 14 to 19 ounces of buds. One thing growers can do is to use the Screen of Green or Screen of Green training method to ensure an abundant yield.

Outside the house and in the garden, each plant can produce 21 to a whopping 30 ounces of buds. It has a flowering time that should occur in October, most likely, within the first two weeks.

Have you ever smoked or grown your own White Caramel Cookie? Please let me know what you think about this marijuana strain in the comments below.