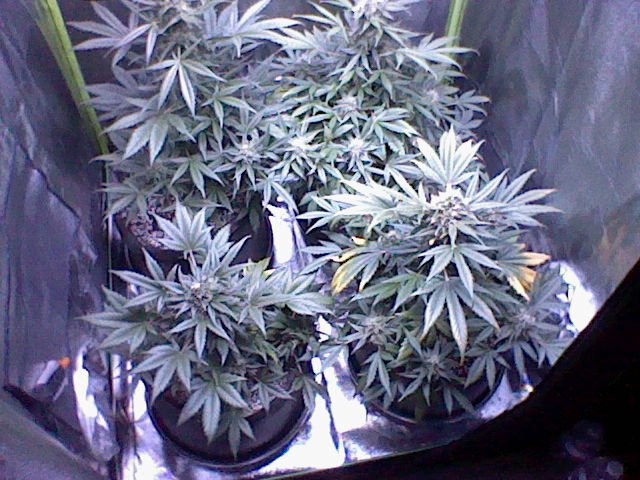 White Widow is a resilient cannabis strain capable of growing successfully both indoors and outdoors. It’s also resistant to many diseases and is adaptable to almost all types of climates although it seems to have a slight bias towards colder climates.

Flowering time for the White Widow averages 8 to 9 weeks and can yield up to 18 ounces of fresh per square meter. However, an outdoor grow can produce a more generous yield, reaching up to 21 ounces per plant. Outdoor White Widow isn’t ready for harvest until around the end of October.

Check out this grow journal where a novice grower attempts to grow White Widow indoors.

Five ILGM White Widow seeds were dropped in water last night. While waiting for them to germinate, the rest of the supplies were prepared:

The first signs of life appeared. After a 24-hour soak, they were thrown into peat pellets. The first one broke the soil, four more to go.

4 seedlings are alive. Not in perfect health because of the unpredictable, widely-changing Ohio weather. The leaves curled down a bit. They also possess a slight case of dehydration and mild light burns. The smallest of the 4 is 1 inch tall and the tallest is about 2.5 inches in height.

The lights were raised 6 inches and the plants are finally re-hydrating. Despite everything, the girls are healthy and thriving.

Finally, here are photos of them inside their pots. They look so small because the pots are large but they’ll surely fill up these pots in no time.

Nothing much to update except for a few photos. More leaves have grown out in the past couple of days. They’re due for a watering and feeding tonight. Otherwise, they’re just dancing in the breeze.

These plants seem to be loving the nutes. Here they are so far.

New light came in yesterday. There’s definitely a smile on two of the girls. No noticeable problems so far.

Eve, 37 days old, is already showing flowers. She’s the eldest among all of them so it’s not surprising that she’d be the first to bloom.

An uneventful grow leads to a boring grow journal and it’s completely fine.

As days go by, they become greener, bushier, and much taller.

It finally happened. Some of the leaves are finally showing a few spots after being accidentally splashed with nutes during the last feeding. Here’s a photo of one of the leaves with spots.

Fortunately, their group and individual photos don’t show the defects. They’re really reaching up towards the lights.

Not much happening but here’s a photo right after watering. Nothing new on that problem leaf. It didn’t get worse so it’s definitely just nute splash. Some of the leaves were trimmed off the leaves at the bottom because they weren’t getting proper light and were touching the soil anyway.

After checking out the girls, 2 of them have their roots actually poking through the bottom of the 5-gallon grow bags. Are the roots looking for water in the overflow tray? The roots seem healthy though and they should be fine as long as they don’t grow any mold. If they get too long, they’ll be cut off.

After another uneventful week and a slight moment when they looked thirsty, they were fed and a few hours later, they perked right back up.

Afterwards, they had some minor trimming. Here are some photos after their second haircut.

The biggest battle now is the heat so the best way to combat it is plenty of circulation. So far, they do not seem to be taking it too hard. Here’s a group photo 53 days from seed.

And here’s a close up of one of the flowers.

The girls received a nice drink today because it was a hot day and they dried up quickly. Temperature peaked to about 90 degrees Fahrenheit.

Not a lot going on this week. The girls are drinking up some water and have to be fed twice as much this week as last week.

Here’s Eve at 2 months old. The buds are calling out.

And as another week comes to a close, no major problems to report. Kind of fun to just watch the buds form. Even the runt of the litter, Uny, is like one big muscle. There’s not one soft spot on her.

And here are Eve, Uny, Ivy, and Ava clockwise from top left.

They’re all getting frosty and the buds are rock hard. None of them have fluffy air pockets.

Nothing much happening other than feeding, waiting, feeding, and waiting.

If their taste is as potent as they smell, they will make any man happy. Check out these three best buds.

The first real problem popped up sometime Thursday night. Two of the girls are showing magnesium deficiencies. 1 gallon of pH-ed water ran through the pots and were supplemented with 1 gallon of nutes/CalMag/pH up.

After checking this morning, the problem didn’t seem to get any worse. Hopefully, this fixed them up. They only have around 2 to 4 weeks to go.

The bad leaves haven’t gotten any worse. Here’s a photo of one of them.

As you can see in the following photos, Eve was the hardest hit. The other three girls have a little bit of it but not even close to being as bad.

Not much to update. Just waiting patiently for the trichomes to change. Today’s forecast is mostly clear with just a speck of clouds.

R.I.P. Eve. She lived a good life for 85 days. She was pampered and spoiled as much as possible and now she’s cut down. Here are a few photos of the service.

May she smoke in peace. The test bud smoke was awesome. This yield is already satisfying considering they weren’t scrogged.

Just a quick update without photos. The other two came down tonight. They’re all drying now. Stay tuned for the total dried weight.

All 4 ILGM White Widow Autoflowers have dried and are now in curing jars. The total usable bud is 207 grams or 7.39 ounces.

This first grow turned out to be hassle-free. Who knew growing ILGM’s White Widow would be so easy and produce such great yield?

Was your first grow as productive as this one?