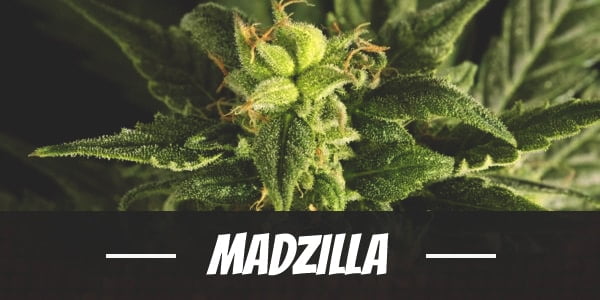 The girl with the tattoo and smokes weed, that’s her, Madzilla. Already a celebrity in her own rights, she continues to fascinate and live life the way she did, keep working for what she deserves. Hence, it is not surprising to see yet another strain coming out on the market. It seems as if there are a few new ones every single day. This one, in particular, was named after the celebrity figure.

We are not aware who the original breeder is, but Madzilla is an offspring of King Louis XIII and Fire OG. Both these strains are peculiar in that by its scent and appearance along, they already can draw attention. Of course, aroma and looks are nothing if they cannot back it up.

King Louis XIII was not named as such because of the hairs covering its buds. Instead, it has an incredible piney scent to set the tone for what comes next. This strain is excellent if one wants help relaxing and sleeping.

Fire OG, on the other hand, is covered with red hair which is why is was named as such. In some ways, this is similar to having tattoos. More than how it looks, it is also notable for easing away stress.

Put these two strains together and cross breed, the result is the almost pure Indica Madzilla.

Unlike Madzilla the person who is an eye-catcher, the strain is low key when it comes to its effects. At least, that is the impression it gives in the beginning. But beware, this is a very potent strain that can easily put people to sleep.

Early on, it does not appear to by anything near its touted potency. Although it almost has no traces of Sativa, it does not mean it does not induce a mild cerebral high. Most people feel a calming sensation that uplifts the spirit. It is also likely that this is the Indica effect slowly working its way to the body.

Some people, loosening up, start to feel a little elated. The general sense of happiness will not last a long time, though. The creeper may be slow and gentle, but it will hit hard and often without users even realizing it. And throughout its duration, users feel extremely relaxed. The chances are high that once it kicks in, most users will not only feel sleepy but also fall asleep.

Madzilla, while one of the best strains for relaxing as well as for medical use, is not without its quirks. It comes with a few side effects that users should know about first, and that will be covered in another section.

King Louis XIII should be given credit where credit is due. Famously known for its delightful scent, the same trait is passed on to Madzilla. It has an earthy odor accompanied by a blend of wood and the sweet and floral scent of lavender. On scents, by the way, lavender is also one of the most soothing scents.

Less of the floral scent, but the sweet pine note dominates its flavors. On aroma and taste, most people should find Madzilla extremely pleasant.

One thing to get out of the way are the two perennial side effects caused by all cannabis strains – dry mouth and eyes. These are typical and does not cause long-term harm.

But there are two concerns that users should be aware of, as mentioned earlier.

One is dizziness. Madzilla has a THC of 19% to 20%. As its powerful effects creep in, it is the manner in which it slams hard into users that can cause some to feel dizzy.

Another cause for concern is that there are people who may feel paranoid with its use. The only way to avoid this is not to use Madzilla. As an option, one can begin with half of normal consumption amount to test it out first. During subsequent use, they can then add a little bit at a time.

If there is one medicinal use of Madzilla, then it has to be in helping people sleep. Notice that at no time was it mentioned that it can cause a couch-lock. That is because, in most cases, people end up sleeping.

But more than helping insomniacs, it also has other benefits. The heavy hitting Indica traits are very effective in reducing stress. Also, the numbing sensation it induces is potent enough to afford comfort to patients suffering from pains and aches.

One thing, though. Madzilla can make people have a severe case of the munchies. It is unlikely that users will be able to eat a little something. Hence, they can expect to feel extremely hungry once they wake up the next day.

First of all, getting ahold of Madzilla for consumption is not easy as it is limited. Having said that, it appears that it is not available in seed form. As such, the only way to grow it is to obtain its clipping.

From all indications, if one were to clone one, it likely will want to have access to plenty of sunshine. We are also confident that it should thrive well using hydroponics as its parents do.

According to some sources, the flowering time for Madzilla is 7 to 9 weeks. It is also estimated to produce some 10 to 12 ounces of dark green buds covered with orange hairs and sticky trichomes.

If grown outdoors, then it should transition to the flowering stage during the early days of October. The current estimate of its yield is 12 ounces or more per plant.

Have you ever smoked or grown your own Madzilla? Please let me know what you think about this marijuana strain in the comments below.