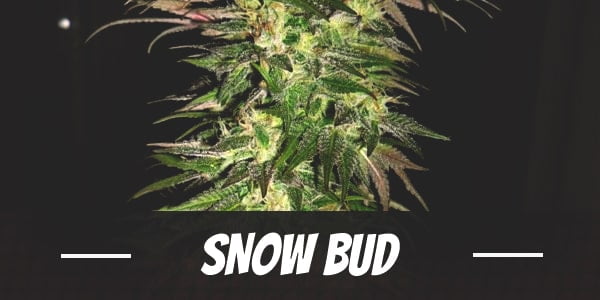 About the only time that many people get to see snow is to watch movies. Even for those living in colder regions, winter is seasonal. But for the cannabis community, there is the Snow Bud – one that they can keep at home and be a constant companion.

Snow Bud does make for a good company. Covered with resin that is reminiscent of snow, the beauty is also known for keeping users happy and relaxed.

The breeder of this strain, Dutch Passion Seed Company, has been in the business for 30 years. They used two pure strains, Afghani Indica and African Sativa, to create Snow Bud. The result is a beautiful bud that has the desirable traits of its parents. Moreover, it also comes with one of the highest THC concentration among all known hybrids.

Today, there are likely over 6,000 cannabis strains worldwide. Granted that many of them no longer exists, the ones remaining are in the thousands. And there is no letup in the efforts of breeders to create new ones.

Among the traits, they focus on when designing a new hybrid is potency. As such, modern day strains often come with an insane amount of THC. In fact, it has come to the point that a hybrid with only 8% to 12% THC is a rarity nowadays. Because of that, having an average potency became one of the unique selling points of Snow Bud.

It could have been a balanced hybrid, but it did not turn out that way. In most estimates, it leans towards the Sativa side. Upon using, users feel a mild uplifting buzz sweeping into the mind and the body. As a result, most users tend to be in a happy mood throughout its duration. In some cases, too, some people may even feel super elated.

At the same time, the physical effects of Snow Bud also work its way to the body. Users of the strain should feel their muscles relaxing but not to the point of numbing.

Snow Bud is ideal for use during daytime or evening. It is gentle but potent enough to induce relaxation and happiness. At no point does it get so intense and cloud the mind or overwhelms the body. That is not to say that it cannot do that at all, though. Use a little bit too much, and it can bring on some unwanted reactions.

Cannabis connoisseurs will have no trouble recognizing the pungent and skunky odor of Snow Bud. It is also accompanied by a spicy note and the fresh earthy smell reminiscent of a garden in the early hours of the day.

Snow Bud, in many ways, has a classic aroma. Simple and enticing. But when it comes to the taste department, it has a complex blend of sweet herbal tea with a spicy note. It works, though, as most people should find it a delight and smooth on the throat.

As of now, we do not have enough information on the side effects of using Snow Bud. It does not mean that there are none. For instance, dry mouth and eyes can be expected by anyone who uses a tad bit too much.

Genetically, if that were to be the basis, then users should watch out for a couple of adverse reactions. One is feeling more anxious while another is getting paranoid. Should these occur, it is likely mild.

Looking at the benefits of Snow Bud to recreational users, it should be easy to see how it helps patients.

Both the cerebral and physical effects it induces helps calms and loosen up the muscles. As such, it helps reduce stiffness such as in the case of spasticity. Not only is this useful for pain relief, but it also aids in stress relief.

Cultivating marijuana in the house is fun and joy. As it turns out, Snow Bud is also one of the easiest strains that even beginners and grow to a high degree of success. Of course, there is work involved. But it seems that this strain is more tolerant of mistakes. Even better, it is resistant to mold and mildew.

Since most people cannot plant cannabis outdoor, it is good to know that Snow Bud grows well with hydroponics. But where it really reaches its full potential is outdoors.

Snow Bud leans towards Sativa with regards to its traits and effects. Fortunately, it grows more like an Indica. As such, it has a quick flowering time that begins in as early as seven weeks. At best, it should produce up to 8 ounces of buds once harvested.

As mentioned, Snow Bud prefers the outdoors where she is free to spread her wings, in a manner of speaking. It can grow up to more than seven feet tall. The transition from vegetative to the flowering stage should begin with the first half of October.

Snow Bud does better with regards to yield outdoor than if it is inside the house. Each plant can produce between 8 to 12 ounces of buds covered with dazzling snowy crystals.

Have you ever smoked or grown your own Snow Bud? Please let me know what you think about this marijuana strain in the comments below.