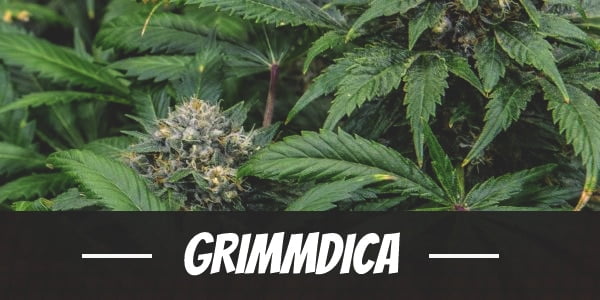 Brothers Grimm Seeds was gone for a long time. For most people, they could not care less. But those in the cannabis world do miss them. So, when they returned, there was a buzz and excitement in the air. As it was, one of the earlier strains they released is Grimmdica.

Not only did they named the strain after themselves, but they made it clear it is Indica-dominant.

Hash Plant is a heavy hitting mostly Indica strain that has gained a worldwide following. Make no mistake about it. It comes with a pedigree being an offspring of the legendary Northern Lights and an Afghani strain.

Before anyone thinks that both Brothers Grimm and Sensi Seeds have the same Afghani strain, the fact is that it is unlikely. At any rate, this particular hybrid, like the Hash Plant, is also mostly Indica. It is also notable for its ability to deliver a sedating effect.

With such illustrious genetic lineage, there is much to expect from Grimmdica. Of course, by all accounts, it did not disappoint.

Where there may be trouble is in finding a genuine source. All over the web, there are many online vendors selling seeds. But it appears that Brothers Grimm has pulled this plant off the market. Either that or they no longer have available seeds for sale.

So, the question is, what are many vendors selling?

It is also within the realm of possibility that there may be a few who tried to duplicate Grimmdica. Likewise, it is also possible that there are fakes too. Hence, it is always a good idea to buy only from reputable sellers.

Both its parents are heavy hitting Indica-dominant strains notable for sedating kind of relaxation. But what distinguishes Grimmdica from its predecessors is in the cerebral effects it delivers.

Although listed as having only 14% to 16% THC, some sources think it can be as high as 26%. Regardless, one thing is for sure. It is very potent and should not be used by first-timers.

Almost as soon as one begins using it, an electric buzz surges in making users feel euphoric. This is also often accompanied by a tingling sensation. Expect bouts of giggles and laughter with Grimmdica. Even with a smaller Sativa side, the cerebral effects are intense.

Some people may also experience a boost in creative thinking. Ideas may come and go. But use it a little too much, then the mental effects may become dreamy where one could fall into introspection.

It does not take long before the sedative-like effects of the strain to creep in. Once it does, it depends on how much users consumed. In small or moderate amounts, they feel more relaxed. But if overindulging, then it can cause a couch-lock.

Long-time users of cannabis should recognize the scent of Hash Plant in the air. It also has a barely perceptible smell of fuel and wood. Like its predecessors, Grimmdica not only brings extraordinary effects, it also has a pleasant odor too.

When it comes to the taste department, this strain is a winner. It has a slight dank flavor blended with diesel and herbs. In particular, it has a note of sage thrown into the mixture making it appealing to most people.

No strain is perfect in the sense that it does not cause any inconveniences. At this point, there is not enough information from users. Hence, we had to take a look at the parent strains to get an idea of what other effects Grimmdica have.

About the only concern that users want to be aware of is that it can cause dizziness. Usually, it does not take long. It gets better in time.

Dry mouth and eyes, on the other hand, are typical with the use of Marijuana.

A couple of things happen especially when the effects of Grimmdica starts to wane. Users feel so relaxed that most tend to fall asleep. At the same time, some may also feel hungry. But due to the hard Indica effects, most often end up not eating anything. If that is the case, then expect to feel extremely hungry after waking up the next day. Hence, Insomniacs may use this strain to help them get the much-desired rest.

Aside from helping people sleep and improving the appetite, Grimmdica also has other uses.

One is in annihilating stress. Another is for pain relief.

Again, there is not a lot of info regarding the plant. But we do know that it grows equally well whether one plants it in the garden or inside the house.

Like many Indica plants, Grimmdica has a quick flowering time beginning on the 8th week. We estimate its yield to fall between 10 to 12 ounces.

With more than enough space outdoor, Grimmdica can grow to its maximum capacity. Between September to October, the plant should begin the transition to the next stage. Each of these plants can produce around 12 ounces of buds or more.

Have you ever smoked or grown your own Grimmdica? Please let me know what you think about this marijuana strain in the comments below.