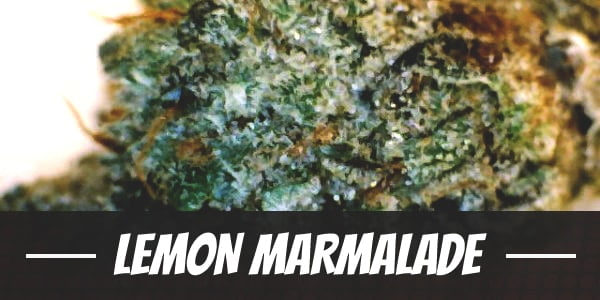 In North America as well as many parts of the world, many people grew up eating among others, lemon marmalade. Consumers have a lot of brands to choose from if buying off the shelf. In the same manner, that is akin to cannabis users obtaining buds.

Lemon marmalade is also easy to prepare at home. All over the web and especially YouTube, there are countless tutorials on making one at home. On the contrary, the only way to have the strain is to cultivate it, if seeds or clippings are available, that is.

For decades and even centuries, lemon marmalade has delighted countless people on earth. If one were to think of it, often, it is associated with children. And that is where any fitting analogy ends.

Lemon Marmalade, the strain, brings one thing to the table that sets it apart from the others. As it is becoming somewhat typical for modern strains to have anywhere from 15% to 25% THC, this one has as much as an otherworldly 30%. Using that as a basis, it is arguably the most potent hybrid ever bred. Otherwise, it still belongs in the same conversation as the other elites in this class.

A perfect blend of Sativa and Indica, users can expect it to deliver an energetic buzz and relaxation. But considering how potent it is, here is a warning. Beginners should not use this strain. Even those who are very experienced should start off with a small amount.

To understand how the Lemon Marmalade works, it is also an excellent idea to look at where it came from.

Meanwhile, another strain that made a name for itself is the Girl Scout Cookies. Among the many things people love is the intense cerebral high that often launches users on a trippy ride.

True to its genetic lineage, the strain delivers one of the most intense cerebral high that one can experience with a twist. As energy and an uplifting sensation crashes into the mind and the body, this mental and behavioral changes do not seem to lead to any psychedelic effects.

Many of its users also describe a tingling sensation accompanying the energizing buzz with some even reporting arousal as one of its effects. At the same time, the full force of its Indica side follows soon to stabilize the mental high. After some time, the body gives way to utter relaxation during the comedown.

From afar, its pungent odor is evident. The smell of earth laced with the sweet and spicy note and hints of lemon is often too much to resist.

While Lemon Marmalade has a strong aroma, they seem a little subdued in its flavors, which now has a more pronounced lemony taste.

Surprisingly, a strain that can have as much as 30% THC does not have any troubling side effects as some might expect. Of course, there is the usual dry mouth and eyes. Of concern, though, is that it may cause a few people to feel anxious.

At any rate, it is common sense to use a small amount, in the beginning, to try it out rather than go gung-ho.

A powerful strain with intense cerebral and physical effects brings with it benefits for medical cannabis users.

First, Lemon Marmalade is excellent in altering the mood. As such, it busts stress, which then enables users to feel happy or even euphoric. As if that cerebral effects alone are not enough, it is also the body high that aids in that.

Second, because the Indica effects do help the muscle relax, it can help people deal with cramps. To a certain extent, it may also help with pain relief.

Finally, another benefit of using Lemon Marmalade is in getting quality sleep. As the intensity of its effects subsides, during the comedown, it is normal for most users to feel extremely drowsy. Hence, that helps people with trouble sleeping find one.

As a side note, Lemon Marmalade causes some people to feel sexually aroused. But keep in mind that there is also a comedown from energetic to feeling too relaxed and sleepy. It’s just something to keep in mind.

As great as Lemon Marmalade is, there is one thing that growers wish is available – seeds or clippings. As of the moment, it seems that the breeder has chosen not to sell its seeds for cultivating.

From this point forward, we can make a fair assumption. If it were available, then it likely will thrive outdoors and indoors. It will also not be the easiest strain to grow especially for beginners. Since most growers can only cultivate marijuana inside their own homes, it should not be a problem at all.

We saw some references to its flowering time at 9 to 11 weeks. So, it seems that Lemon Marmalade grows more like a Sativa plant. It means that growers will have to top it and keep it short, but that depends on the space available. The estimated yield should be in the range of 10 to 12 ounces.

The chances are high that the plant grows taller than 6 feet if planted in the garden. Each plant should be able to produce at least 12 ounces of buds.

Have you ever smoked or grown your own Lemon Marmalade? Please let me know what you think about this marijuana strain in the comments below.