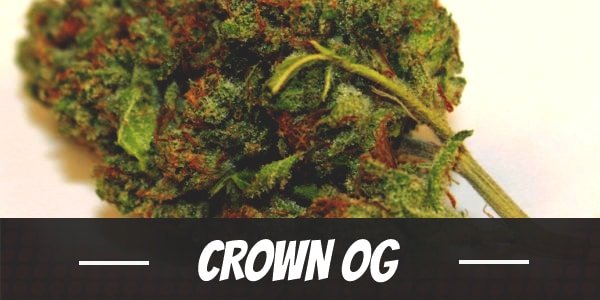 From Colorado to California, one of the most prominent strains is the OG Kush. One of the things that it can do far better than many others is its ability to wipe away stress. So, the question is what happens if it is 100% Indica as opposed to being Indica-dominant?

Once it was a mystery to ponder, but that question was answered by the 2015 High Times Denver Cannabis Cup Best Indica Concentrate winner Crown OG.

As its name implies, this is a 100% Indica strain created by Crown Genetics. Using their proprietary methods, they bred the new strain using OG Kush. Exactly which one, though, they are not saying.

OG Kush, as it is, has many phenotypes. Some of the better-known ones are SFV OG and Tahoe OG. From one of another strain, no one except the breeders knows the exact process which led to the birth of Crown OG. One thing is for sure, though. It highlights the best trait which made OG Kush legendary.

Insane is the one word that can describe Crown OG. Of course, we do not mean it in a damaging way. Instead, it is because of the THC content that it possesses. Even so, it does not act fast as the creeper takes its time before bringing it on.

Almost as soon as the effects finally kick in, the strength of this strain is evident. A crushing wave of euphoric buzz surges in and takes over the body. Resistance is futile as it crushes any obstacle in its path. No stress, no worries, there is only bliss and happiness. Having up to 28% THC can do that. In many ways, one can think of Crown OG as the supercharged version of OG Kush.

In most cases, users of Crown OG should do fine during the day. In other words, even under the influence of the intense physical effects, they remain productive. Of course, that goes without saying that they have to struggle a little as the urge to sit down is almost irresistible.

Use it at home, though, the likely result of using this strain is letting it overwhelm the body. The sedative-like property of Crown OG does not cause one to feel lethargic. Instead, it is more like feeling lazy and wanting to chill and not do anything at all.

If the purpose of using this weed is to relax, it would be hard to find a better strain. At the same time, it also has incredible benefits to medical cannabis users. We will have more on this in a while.

Boasting of an earthy freshness and uplifting smell of pine, Crown OG is not that much different to OG Kush. As most people find OG Kush enticing, Crown OG will have the same effect on users.

Crown OG has an exciting and exotic mix of flavors. Even as its aroma is evident in its taste, it also has a subtle skunky note. A spicy hint is also noticeable as one exhales.

The intensity of Crown OG can cause some people to feel dizzy or even have a mild headache. Both of which, should not occur if usage is moderate. Overusing, of course, makes the symptoms more pronounced.

Like other strains, too, users can also expect to experience dry mouth and eyes.

The strong sedative-property of Crown OG can do a lot of things for the medical cannabis user.

One is that the overwhelming euphoric buzz and inducing muscle relaxation is more than enough to take away stress. It is also helpful in the management of ADHD/ADD, PTSD, and depression. At the same time, it is also useful for pain relief.

Take away the stress and pain, what is left are happy users in a state of bliss. As the intensity of the effects begins to fade, most users also tend to fall asleep. Hence, Crown OG is excellent for use in the evening or on lazy days.

Furthermore, the strain also has the tendency to cause some people to feel hungry. Either they eat a little something, or they wake up feeling very hungry. People with trouble eating may find this a benefit.

Growing Crown OG should be fun. Being an almost pure Indica, it should grow quickly and in no time at all, imagine the potent buds. These are dense buds covered with orange hairs and milky white trichomes, and 25% to 28% THC. Everything about this strain is great up to this point.

But where are the seeds?

It appears that Crown OG is clone-only. Until such time that a seed bank starts selling its seeds, cultivating it is only a pipe dream, as of now.

Like its parent strain, Crown OG should thrive in a warm climate. Indoors, it should grow well using hydroponics.

From all indications, Crown OG should have a flowering time of 7 to 9 weeks. At this time, the estimated yield per square meter is in the range of 8 to 12 ounces.

The flowering phase should begin during the second to third week of September. Each plant is likely to produce 12 ounces or more.

Have you ever smoked or grown your own Crown OG? Please let me know what you think about this marijuana strain in the comments below.