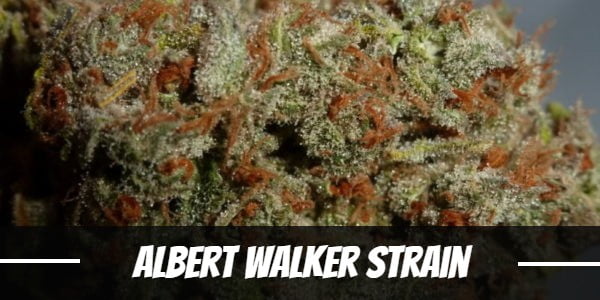 At times, one has to wonder. With all the bad rap that has plagued the marijuana industry, here comes a strain named after a person whose notoriety is shocking, to say the least. Yet, the reference to the name is not at all a means to inspire or emulate the criminal but rather to highlight its potency.

At least, that is what we would like to believe.

Another story that is going around is that once a man was handing it out to Grateful Dead roadies. It does not have a name, but because the man was using a walker, that is where the strain got its name. Half of it, anyway.

Albert Walker the strain traces its lineage to the Afghan Skunk. As many cannabis connoisseurs know, the Afghani Indica is arguably the best pure strain in the world. At the same time, the skunk family has bred generations of new hybrids.

In crossing Skunk with Afghani, the result is a premium hybrid called Afghan Skunk. Not only is it now famous worldwide, but it is also a favorite among growers because of its massive yield. The strain is notable for its profoundly relaxing effects that soon lead to falling asleep.

In most sources, the few that there are actually, it is noted how crossing Afghan Skunk with an unknown Indica led to the creation of Albert Walker. It is not beyond the realm of possibilities that Afghan Skunk was back-crossed with the original Afghani Indica.

Albert Walker leans more toward its Indica heritage, but its Sativa side is more evident in the beginning. At its onset, the uplifting sensation flooding the mind and the body raises the mood of users to happiness. For many, they eventually also start to feel euphoric.

Accompanying the feel-good effects are mental clarity and focus. In other words, the cerebral high this strain induces is conducive to productivity. But while the results are quite intense, it does not go overboard where Albert Walker overwhelms the mind with a buzzing high that clouds thinking.

As the physical effects also work its way to the body, a sense of calm leading to body relaxation becomes apparent. Even as it sorts of balances the cerebral high, these physical high also intensifies. At this point, how further these Indica traits go depends on how much one uses.

For instance, used in moderation, it should not cause a numbing buzz that causes people to stay on their couch. But used in the same manner as others, with regards to the amount, then users will end up feeling drowsy and eventually fall asleep.

The skunky odor it emits is definitely reminiscent of the ever-famous Skunk No. 1 strain. While it is pungent, it also has the refreshing, earthy scent. To make it interesting, exotic, or unique, a sour note of lemon makes for an aroma that one either loves or otherwise.

There are many popular strains that are direct descendants of the Albert Walker. Read our full review on Walker Kush Strain that was created by crossing Albert Walker and Rare Dankness #1

As mentioned, either one likes or dislikes its aroma. Whichever way one leans towards to, the consensus is that its flavors are in contrast of its fragrance. While some of its skunky note is detectable, the grapefruit and citrusy orange tastes are more pronounced.

If there is one thing that should make people pause a little before using any cannabis strain, then it is what adverse effects it induces. Fortunately, Albert Walker is not at all exceptional in this department.

While users can expect to experience dry mouth and eyes, these are nothing new to anyone who has been using marijuana for a while. About the only thing that may become apparent too are dizziness, a mild headache or slight paranoia.

In most cases, the best strain to use to alleviate the symptoms of pains and aches are the heavy hitting Indica hybrids. These often have strong analgesic and sedative-like properties that numbs the body. Clearly, Albert Walker is not that kind of strain. Nonetheless, one of its most popular use among medical marijuana users in as such, to offer comfort for people with illnesses causing undue pain.

Looking to buy seeds like Albert Walker? Check out our marijuana seed bank.

Perhaps one can also consider that the euphoric yet relaxing effects it induces are also useful for stress relief. As for the others, some people have noted how the temporary boost in energy levels helps in fighting the symptoms of fatigue, yet the same strain also causes people to sleep. Hence, one of the best use of Albert Walker is to use enough to help patients sleep better.

Albert Walker, unfortunately, is not available in seed form. Hence, it is almost next to impossible for anyone to find a grower to get a clipping for cloning. Even with limited data, we can also surmise how the plant grows based on its heritage.

This plant should grow in a warm environment. It may grow to more than 6 feet tall if planted outdoors.

A safe assumption of when growers can trigger its flowering time is between 8 to 10 weeks. At the very least, it should also produce anywhere from 12 to 16 ounces of buds every square meter.

If planted in the garden or backyard, Albert Walker can produce 16 ounces of buds or more. It should start to flower towards the first days of October.

What is the Albert Walker strain yield?

How much THC does Albert Walker have?

What are the origins of the Albert Walker strain?

Have you ever smoked or grown your own Albert Walker? Please let me know what you think about this marijuana strain in the comments below.