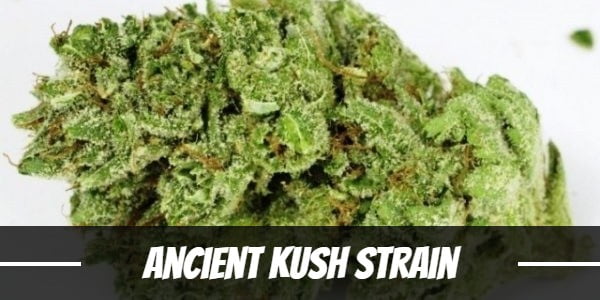 The story of a strain enhances the overall experience of smoking it. Sadly, the same cannot be true for Ancient Kush. To this day, it remains an enigma among the cannabis community yet it maintains a special place in the hearts of many enthusiasts for its recreational high and medical benefits.

There is one clue though. While its other parent cannot be identified, many are certain that its genes contain Afghani Indica. It grows into a short, bushy plant with resinous buds that are accentuated by eye-catching purple streaks. Moreover, it has the pungent scent of damp earth.

Interestingly, Bodhi Seeds has an almost similar strain with genetics of Persian Indica originating from Afghanistan paired with Snow Lotus.

Though predominantly Indica, Ancient Kush differs from strains like it for its ability to make users feel energized. In fact, its initial onset enhances the mood. In doing so, it also it clears the mind so users can tap into their creativity. With gears going, the ebb and flow of thoughts become seamless until one is brimming with ideas.

In time, the rush of energy from the temples courses through the muscles and invigorates the body. Feeling inspired and curious because of the persistent mental effects, most enthusiasts fall back to their chairs, crouch on their desks, and complete tasks without feeling tired from the long periods of concentration.

In all likelihood, the bout of productivity can lead to casual users feeling aroused. After all, the electrifying jolt is mentally and physically stimulating. And, as a natural aphrodisiac, such effects can only be expected of Ancient Kush. For this reason, one of the best times to use the bud is hours before bedtime or in the late afternoon – preferably with a loved one at that. By then, it is only a matter of time until both fall asleep.

However, with THC levels ranging up to 19%, one must be careful of overusing Ancient Kush.

Ancient Kush has a skunky scent overlapped by strong notes of cheese. There is also a subdued sourness reminiscent of citrus and lemon. Broken apart or combusted, a minty aroma with herbal undertones fills the air.

Carrying over to Ancient’s Kush flavors are its overtones of skunk and cheese. It is a bit sour but an aftertaste of cool mint washes over the mouth right after the smoke is drawn out.

Due to the strength of its landrace genetics, Ancient Kush comes with a variety of side effects. One of which is the unavoidable case of dehydration. Since moisture-inhibiting cannabinoids interfere with tear ducts and salivary glands the most, users will always end up with red eyes and a cottonmouth. Thankfully, both are only a minor setback and can be easily addressed by staying hydrated.

With a potent strain like Ancient Kush, the chances of experiencing a condition called ‘greening out’ are higher. It is characterized by dizziness and heightened levels of anxiety. In rare instances, it can exacerbate into a subtle feeling of paranoia. Pacing and moderation, however, will keep such symptoms at bay.

In high levels, stress can be quite life-threatening. It can accelerate the onset of depression and exacerbate anxiety. It even manifests in the physical through fatigue, aches, and heart problems. As such, it is always important for people to take time off and release all of the accumulated stress. This will also appease symptoms of the mental illnesses mention above as well as PTSD.

Looking to buy seeds like Ancient Kush? Check out our marijuana seed bank.

Apart from inducing a recreational high, THC also stimulates the appetite. For this reason, Ancient Kush is best used an hour or two before a meal. Apart from encouraging a hearty craving for food, it relieves the stomach of any sharp sting caused by spasms in the stomach. The same analgesic properties also relieve pain beginning from the temples.

Ancient Kush is a difficult strain to come by. However, Bodhi Seeds has a similar one named Ancient OG with seeds available in regular form. While they cannot guarantee a full batch of females, growers may still increase the chances of producing a calyx-filled plant by using germination techniques like soaking. There is also the option of planting and germinating more seeds. Meanwhile, applying Low-Stress Training will keep the remaining herbs from turning into hermaphrodites.

Heavily influenced by the genes of a landrace Indica, Ancient Kush has a height that barely requires topping. However, it spreads wide during the vegetative stage due to its naturally branchy structure. For this reason, indoor growers may want to train it by bending its branches. Using the Sea of Green method will also maximize spaces between nodes and even produce healthier budding sites.

One of Ancient Kush’s greatest assets is its hardiness. It thrives in both indoor and outdoor settings without many problems. As for climate, warmer conditions are preferred. But, exposing the plant to slightly colder temperatures during the flowering phase will bring out its buds’ vibrant colors.

It takes approximately 7 to 9 weeks for Ancient Kush to fully flower. It produces between 10 to 12 ounces of buds per square meter.

Ancient Kush usually flowers around late September to the second or third week of October. Each plant yields at least 12 ounces of buds.

What is the Ancient Kush strain yield?

How much THC does Ancient Kush have?

What are the origins of the Ancient Kush strain?

Ancient Kush was created from a mix between Afghani Landrace and Unknown.

Have you ever smoked or grown your own Ancient Kush? Please let me know what you think about this marijuana strain in the comments below.