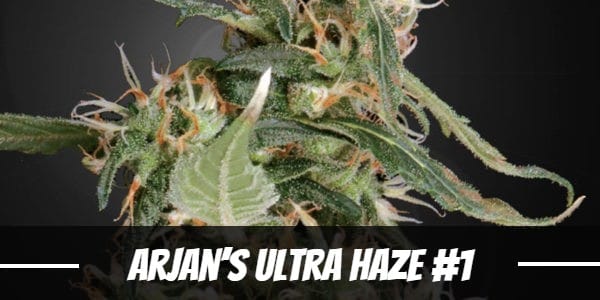 Arjan Roskam. The founder of Green House Seeds is one of the most prolific personalities in the world of marijuana. He has been dubbed as “The King of Cannabis” thanks to the many strains that his company has developed. One of which is part of his signature strains collection, Arjan’s Ultra Haze #1.

This Sativa-dominant hybrid is a three-way cross between Neville’s Haze and two landraces from South East Asia – Laos and Cambodia. Together, these three produced a multi awarded Sativa that has earned good reputation amongst cannabis connoisseurs.

But, like many other Sativa strains, Arjan’s Ultra Haze #1 is slow to flower. It typically takes more than ten weeks for users to get a glimpse of its minty forest green buds. However, the one-of-a-kind Sativa effects, delightful flavors, and most especially the massive yields all but make up for the long time.

Arjan’s Ultra Haze #1 embodies all that is good in Sativa. Measured at up to 16.22%, its THC levels are enough to topple even the most experienced of stoners. In spite of this, novices may find the strain to their liking so long as they consume it well within its limits.

Intense and cerebral are the two words that best describe the strain’s onset. Right after the first toke, a surge of energy fills the mind with positivity and readies it for the hurdles of life. Not only that, the mental stimulation gets users to think creatively. With a clearer mindset and a keener sense of focus, brainstorming comes as easy as one, two, and three.

The Indica effects gradually take over and induce a relaxing high. It begins with a tingling sensation that turns into a warm fuzzy feeling of happiness spreading throughout the body. Much like a well-oiled machine, tense muscles loosen to facilitate movement with ease. As it intensifies, the effects remain calming.

The mellow yet uplifting high of this Sativa dominant strain makes it perfect for daytime use. The perfect wake-and-bake, it allows for productivity without the feeling of heaviness looming in. Regarded as a psychedelic, one may need to watch out for the audiovisual alterations Arjan’s Ultra Haze #1 causes when overindulged.

Arjan’s Ultra Haze #1 is rich in the terpene alpha pinene. As such, it has the refreshing aroma of pine infused with herbs like rosemary and sage. The strain also has the comforting scent of damp earth. Breaking up the buds produces notes of pepper and mint.

The herbal tea flavor of Arjan’s Ultra Haze #1 is what makes it attractive to users. It is calming but is accented by an energizing mint. On the exhale, a spicy pepper takes over.

As a potent Sativa strain, one can expect for Arjan’s Ultra Haze #1 to make users feel a little bit paranoid. This is usually due to the audiovisual distortions that occur once too much of the strain is consumed. Pacing and moderate use are two of the ways users can avoid such effects.

Apart from that, Arjan’s Ultra Haze #1 should only cause some dryness and a bit of dizziness. Dehydration is typical of marijuana use and is usually confined to areas like the eyes and the mouth. But, both are mild and not a cause for concern. If it does cause some discomfort, one simply needs to down a glass or two of water.

A strain can have minute CBD levels and still remain beneficial to the medical marijuana community. How? Through its psychoactive compounds and cannabinoids. In fact, studies have found that something as simple as a strain’s fragrance and flavor (caused by terpenes) can have a significant impact on the body. Thus, Arjan’s Ultra Haze #1’s medical benefits do not only come from its CBD (0.19%) but also from the alpha-pinene terpene which it is abundant with.

A 2011 study published by the British Journal of Pharmacology found that when this particular pinene is found in Sativas – which is exactly the case with Arjan’s Ultra Haze, it helps users stay alert and focus on tasks at hand. This makes the hybrid a great option for those who struggle to concentrate on a single task such as those with ADD or ADHD.

Pinene is also known to elevate energy levels and can be used as a stress reliever. But, that is not all it can boost. Terpenes are also receptors of psychoactive compounds and other cannabinoids. As such, it can be used to simultaneously enhance the feel-good effects of THC. This makes Arjan’s Ultra Haze #1 the anti-depressant strain to toke when bombarded with constant negativity.

The hybrid also works wonders for the body. The same stimulating effects mentioned above also affect the appetite and urge people to eat. As a bronchodilator, Arjan’s Ultra Haze has widening effects one’s air passages which leads to less coughing and better breathing. Its relaxing effects also soothe different kinds of aches and pain like fatigue and headaches.

Green House Seeds has not only made the seeds Arjan’s Ultra Haze #1 available in dispensaries worldwide, it has also released it in its feminized form. By doing so, aspiring growers need not worry about digging up a wasted batch of males and can, instead, focus on caring for their plants. Growers may want to utilize LST (Low Stress Training) to contain the strain’s height and to keep the strain from developing into a hermaphrodite.

Patience is usually a prerequisite for growers aspiring to cultivate Arjan’s Ultra Haze #1. As alluded to in the table above, there is an exceptionally long period between germination and flowering. However, all complaints often disappear once the strain blooms. Jaws drop at the sight of its beautiful, trichome frosted buds that are filled to the brim with resin. Not only that, the high yields make up for much of the time lost.

Flowering takes place within 13 to 14 weeks after planting Arjan’s Ultra Haze #1. While this may seem like a long time, it may be worth it when yields are considered as it can produce a good 24 ounces of buds per square meter.

Influenced by its landrace parents from South East Asia, Arjan’s Ultra Haze #1 thrives in warm climates. In northern hemispheres, flowers should appear by the first week of November meanwhile southern countries can expect it to bloom around June. Nonetheless, harvest time will reward growers with an amazing 40 ounces of buds per plant.

What is the Arjan’s Ultra Haze #1 strain yield?

How much THC does Arjan’s Ultra Haze #1 have?

What are the origins of the Arjan’s Ultra Haze #1 strain?

Have you ever smoked or grown your own Arjan’s Ultra Haze #1? Please let me know what you think about this marijuana strain in the comments below.