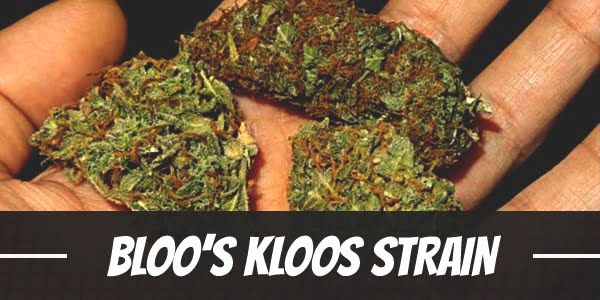 Bloo’s Kloos is quite a mellow strain. Its THC levels of 12% to 15% induce a clearheaded high that does not overwhelm the mind at the first toke. The same holds true for its body buzz, which is a gentle, soothing sensation without any sedation.

The strain is a three-way cross of household cannabis names.

Larry OG. Lemon Larry is an excellent wake-and-bake companion. It instills a sense of mental and physical calm that improves productivity. Moreover, it is an excellent source for mellow highs that do not interfere with one’s plans for the day.

Blueberry. This Indica exudes a fruity aroma that invigorates the senses at just the first whiff. Upon consumption, it delivers a gentle euphoria and heavy body relaxation that lulls users to sleep within hours after the first toke.

Northern Lights. Similar to the natural phenomena, Northern Lights produces buds with overtones of purple and green accentuated by hints of yellow. It is a highly attractive strain with an even better brand of high that starts off mellow and finishes intensely.

Hailing from three attractive parents, Bloo’s Kloos retains many eye-catching features. Its buds, for instance, have an azure and royal purple that deepens as the strain is further exposed to cool temperatures. Blanketing it is a thick coat of trichomes that give it a gleam.

Not one to rush, Bloo’s Kloos likes to take its time when first starting out. Thus, instead of a head-slamming buzz, it begins with a slow-acting rush of energy that gently coaxes the mind awake. Eventually, it spreads to the rest of the body to deliver a subtle invigoration.

As it swarms the mind, it removes worries hiding away at different nooks and crannies. It clears the mind, creating space for thoughts to ebb and flow into ideas. No doubt, the fresh perspectives will spark creativity in the process. The mental clarity sharpens the senses and enhances focus too.

Although it could boost productivity temporarily, the Indica-leaning strain is best used on a day off or a few hours before work ends. Its sliver of energy lasts only for a few hours before turning into a soothing sensation that settles in the limbs. It is not at all heavy though and the likelihood of it sedating users is low too. Instead, it is a deep-seated relaxation that takes off traces of tension and stress.

At the first whiff, there is a noticeable fruity aroma that enthralls the senses. Breaking apart the buds reveals its blend of sweet berries with the light tang of blueberries.

Bloo’s Kloos offers an invigorating breath of fresh air to its consumers. Its citric flavors take much of the spotlight at the beginning, but it gradually develops into a sweet blueberry. On the exhale, it leaves a berry-flavored aftertaste with hints of other tropical fruit as well.

The Indica-leaning strain, like other cannabis varieties, contains moisture-inhibiting cannabinoids. As such, users should experience the usual dry eyes and cottonmouth. Both are mild and easily manageable through hydration. Avoiding alcoholic and caffeinated drinks will help diminish the discomfort.

At up to 5%, Bloo’s Kloos contains more CBD compounds than most strains. Hence, it contains significant therapeutic reprieve against a myriad of mental and physical afflictions. Stress relief is one of its fortes. It induces a subtle invigoration that refreshes the mind, soothes worries while also eliminating fatigue. In calming the nerves, it also instills an inner sense of peace.

Similarly, it could also be of use as an anti-psychotic, anxiolytic, and anti-depressant. It stabilizes turbulent emotions and removes the overwhelming dread that can sometimes mess up the psyche. As such, patients dealing with psychological distress will find great comfort in its happy high.

As an analgesic, Bloo’s Kloos helps manage the symptoms of a wide variety of physical pains. It delivers a soothing rush that appeases intraocular pressure, muscular contractions, cramps, and headaches. And, compared to OTC medicine, it does not induce other side effects like nausea. On the contrary, it eases gastrointestinal pains that could lead to vomiting or stomachaches.

Bloo’s Kloos exhibits many Indica qualities. It is s short, compact, and bushy. Its stalks are thick while its branches are hardy, barely bending at the weight of its heavy buds. Not to mention, it has notable immunity against common pests and diseases.

Growers have the most advantage indoors. Controllable environments offer easy adjustment to various growing factors like temperature, lighting, and humidity. Moreover, its compact structure allows beginners to place it in a dedicated tent or small growing room.

Provisions could be made as the Bloo’s Kloos moves from one growing phase to another. For instance, once it enters the flowering period, growers may switch to a 12/12 lighting schedule from an 18/6. High intensity lights with at least 600 watts will provide enough energy required for bud production.

Pruning is necessary though. Its foliage becomes denser as it nears maturity. Removing some dead branches and dried leaves will improve air circulation in the lower nodes. Installing a fan, as well as a proficient ventilation system, will also reduce excess moisture in the air.

TIP: Buy seeds like Bloo’s Kloos at our seed shop

It takes Bloo’s Kloos between 7 to 9 weeks to fully blossom. At harvest, growers can expect between 10 and 12 ounces of buds per square meter.

Outdoors, Bloo’s Kloos flowers from the last week of September to the middle of October. It yields at least 12 ounces of buds per plant once ready for harvest.

Have you ever smoked or grown your own Bloo’s Kloos? Please let me know what you think about this marijuana strain in the comments below.