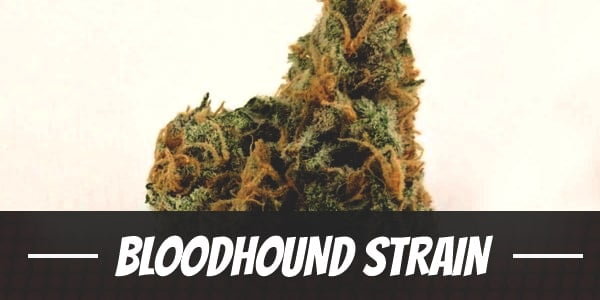 Bloodhound may be one of the most powerful strains to hit the cannabis market. It has a THC floor of 24% and could sometimes test beyond this average. As such, one could say that its purple-colored buds are a thrill seeker’s favorite.

It gains its potency from Guard Dawg. This Indica-leaning strain is best used at nighttime due to its propensity for putting users to bed. Its colors, on the other hand, are a testament of Huckleberry Hound’s influence. Its buds catch the eye of many onlookers. Furthermore, there is the added benefit of its rather stimulating effects especially at the onset.

What developed from the two is a slightly Indica-leaning strain with a potent blend of head and body effects. It delivers a rush of energy at the start that wakes users from lethargy, but its comedown is a welcome end to a stressful day. And while many would use its high THC levels recreationally, it also has its merits therapeutically. It could be used to appease the symptoms for a wide variety of afflictions.

The strain is not exactly recommended for first-time users as it can potentially overwhelm the mind of users who are unused to the psychoactive compound. But, beginners may still enjoy the strain provided that it is used in moderation.

Bloodhound’s effects are reminiscent of Sativa strains. It starts strong with a quick-acting onset that almost instantly improves the mood. Its uplifting buzz frees the mind of worries that consume it. Taking over is an innate sense of happiness that lasts throughout the day, giving users extra strength to face problems that may come underway.

The upbeat disposition often inspires a knack for telling stories and sharing anecdotes. Thus, it should come as no surprise that one become a little more sociable while under the strain’s influence. Casual users, on the other hand, may want to take advantage of the added confidence to share ideas with colleagues.

Complementing the initial head high is a gentle rush of energy that invigorates the body. It allows users to work on goals designated for the day without feeling tired or rushed. Eventually, as the comedown comes to a close, users begin to feel a deep-seated relaxation that further amplifies the feeling of freedom from worry.

Bloodhound has an earthy aroma with powerful notes of sage. Breaking its buds apart and combusting it reveals delicious hints of chestnut, fruit, and chocolate.

Its enthralling notes of nuts, fruit, and chocolate make Bloodhound taste like trail mix. Enriching the smoke are undertones of wet soil while, on the exhale, it leaves an herbal aftertaste of sage.

Dry eyes are a common reaction to smoking cannabis. The same holds true for Bloodhound which contains moisture-inhibiting cannabinoids. Along with it is a cottonmouth that lasts just as long. Although both are mild, one can soothe the irritation by downing a few glasses of water and avoiding alcoholic and caffeinated drinks.

THC-enriched strains are often mistaken as recreational-only strains. However, this does not diminish the significant therapeutic effects of the psychoactive compound. At its levels, it can be a natural alternative to synthetic drugs like OTC stress relievers and anti-depressants as well as opioid-based painkillers.

Its uplifting high is an uncanny source of comfort to patients dealing with chronic stress, anxiety, and PTSD. It eliminates worries and the overwhelming dread that comes with mental fatigue. Patients suffering from depression will also find comfort in the strain’s happy high. It pushes back negativity as well as feelings of hopelessness and despair. In its place, there is a sense of calm that clears the mind and allows users to stay levelheaded.

As an analgesic, it can provide relief against arthritis, joint pains, headaches, and backaches among others. It effectively reduces its intensity as well as frequency. For some, it may even completely diminish the aches and pains for a few hours. Meanwhile, its muscle-relaxing properties ensure that patients can enjoy temporary peace.

Bloodhound has an impressive growth profile. It has thick stems and hardy branches that are not easily fazed by the wind. Instead, it holds its ground and develops a stronger stalk, so it can withstand the elements. Thus, it is an excellent strain to cultivate outdoors where it can grow to its heart’s delight without being confined by pots and four walls.

Of course, this is not to say that growers should refrain from cultivating the plant indoors. On the contrary, it is highly adaptable and will fare well inside a dedicated tent or grow room. It will need some pruning as it tends to get bushy. In this way, too, growers could improve light distribution and air circulation in the lower nodes.

Provisions could also be made to accommodate any needs that may arise. For instance, growers could install a fan that would cast a light breeze. Meanwhile, higher intensity lights could account for the plant’s need for more intense illumination during the flowering phase.

With regard nutrition and feeding, there is little need for deviation from the usual growing methods. However, one may add boosters to supplement bud production. Growers with knowledge of advanced growing techniques may create a Sea of Green setup which will take maximize indoor growing spaces and take advantage of the plant’s relatively short height. This method requires coaxing a single main cola and hastening the vegetative phase without sacrificing yields.

Indoor growers can expect at least 10 to 12 ounces of buds per square meter after flowering for 8 to 9 weeks.

Bloodhound flowers between the second or third week of October for growers in the northern hemisphere. Usually, yields are around 12 ounces of buds per plant.

What is the Bloodhound strain yield?

How much THC does Bloodhound have?

What are the origins of the Bloodhound strain?

Bloodhound was created from a mix between Huckleberry Hound and Guard Dawg.

Have you ever smoked or grown your own Bloodhound? Please let me know what you think about this marijuana strain in the comments below.