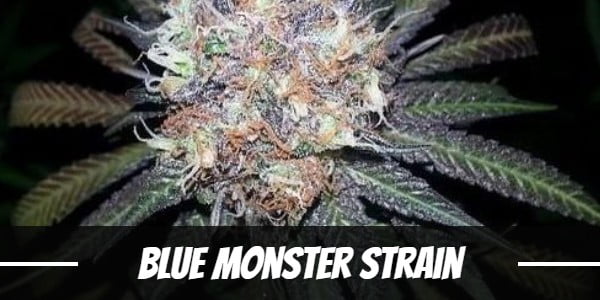 Typically, hybrids are a cross between two strains. In some instances, it could be three. But in the case of Blue Monster, it is a four-way cross. Bred by Goldenseed, a company based in the United Kingdom, this strain boasts of prominent lineages. In its genes are the promises of a great time with its use.

1. G13. Besides its exceptional Indica traits, a part of its allure is its dubious origin. Some people suggest that it was the project of the CIA or the FBI. And, the reason for its existence today is because someone smuggled out a clone from an undisclosed facility.

2. Blueberry. For decades, this hybrid has thrilled users with its delightful fragrance and flavor. Not only that, it brings a well-balanced head and body high.

3. Northern Lights No. 5. Only a few hybrids can be classified as true legends. One of them is this Indica which has served as the genetic base of many award-winning strains.

4. Mexican. While the other three hybrids are either mostly Indica or balanced, this landrace breed is a pure Sativa. The choice of using it is to add a nice stimulating head high to the new strain.

These are four exceptional strains. As such, there is much to expect from the Blue Monster. Whether it meets expectations or not is subjective. After all, individual preference varies. But for those who prefer marijuana that can provide a profound mental high before relaxing and drifting off to sleep, this strain is an excellent choice.

From its name, one may assume that it is a very potent hybrid. In more ways than one, that is accurate. But it also comes with good-sized buds and better than average yields.

Blue Monster is a mostly Indica hybrid. However, its initial onset is more cerebral than the body. It begins by stimulating a clear-headed high. As its psychoactive properties continue to make its way to the mind and the body, it ushers in an uplifting sensation. It results in people feeling cheerful and sociable. In fact, many users are likely to find themselves more talkative than usual.

While it may take a little bit of time, the full Indica traits of Blue Monster eventually becomes more pronounced. From a calming sensation, in the beginning, it intensifies to deep relaxation. It also is likely to leave users in a couch-lock. During this time, it is possible that some people are bound to feel the hunger pangs. Depending on the amount used, it is possible to get up and eat. However, others may simply drift off to sleep and wake up the next day feeling starved.

For people who end up using a tad bit more than they can tolerate, the psychedelic effects of Blue Monster can be overwhelming. It may result in heightened sensory perception and visual distortion. Most likely, it leaves people in deep introspection while remaining unmoving on the couch or the bed.

Some strains emit a pungent odor. Not that it is bad, but some people may want a gentler scent for privacy reasons. In that sense, Blue Monster should be an excellent choice. The sweet blueberry aroma that comes with a subtle earthy and spicy hint is also quite a delight. Upon grinding the buds, it releases a hint of diesel.

Blue Monster has a sweet and sour taste of berry. It also comes with a mild hint of fuel. While its exotic taste is pleasant, its smoke can be harsh and result in a coughing fit.

No matter which strain one chooses to use, adverse effects can be expected. The two most common ones are dry mouth and dry eyes. At times, some people may also have a slight headache. There is nothing much one can do but to ignore its symptoms. At any rate, most users do not even feel it because of the high that marijuana induces.

Being an Indica-dominant strain, the most pronounced effects of Blue Monster are physical. It complements the mental high in uplifting the spirit and putting people in relaxation. Because of that, it results in tensions leaving the body. For the users, that means they feel stress-free. Physically, it results in relief from eye pressure and other discomforts.

Unfortunately, it is not among the best strains for pain relief. It does help in mild cases. But where it may prove to be more useful is in inducing drowsiness. Hence, Blue Monster is best used as a night-time companion.

Blue Monster is not a difficult plant to cultivate. Typical of many marijuana plants, it thrives indoors and outdoors. As it is Indica in structure, the plants are short and bushy with numerous lateral branches. To bring out its purple hues, growers can shock it artificially by exposing it to 10 degrees colder environment than it is accustomed to.

Blue Monster has an indoor flowering period of 8 to 9 weeks. It can produce between 10 to 12 ounces of buds per square meter.

Typically, the plant begins to transition to bloom stage during the last week of September. It should be ready for harvest in two or three weeks. By then, each plant can potentially produce more than 12 ounces of buds.

What is the Blue Monster strain yield?

How much THC does Blue Monster have?

What are the origins of the Blue Monster strain?

Blue Monster was created from a mix between G13, Blueberry, Northern Lights #5, and Mexican Sativa.

Have you ever smoked or grown your own Blue Monster? Please let me know what you think about this marijuana strain in the comments below.