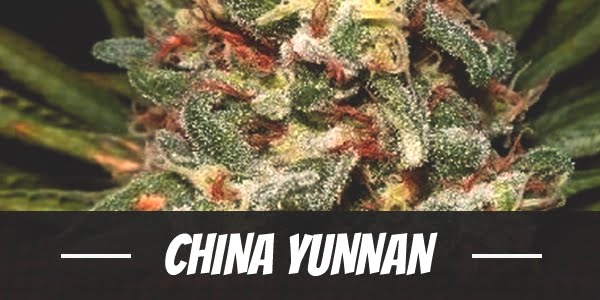 Can a strain be more exotic than China Yunnan? Originating from the southern Chinese province bordering Myanmar, it is currently cultivated and distributed by Ace Seeds. At 80% Indica, it appears too that its genetics contain the heritage of South East Asian Sativa.

Looking at the thousands of strains over the decades, cannabis from China is rare. Unknown to many, its use can be traced back to as early as 6,000 years ago. Granted that there are other regions where cannabis grows, it is only the ones in the province of Yunnan that may have value to recreational users.

On its medical use, the government has been cracking down on its use and cultivation since the 90s. Still, they have also invested in researching its medicinal use. In fact, Chinese companies hold half of the hundreds of worldwide patents. Of note, too, is the use of hemp as well as its being the global leader in exports.

China Yunnan has yet to hit the mainstream. If Ace Seeds can have its way, they would want breeders worldwide to use it for breeding other hybrids. Already in its third generation, the strain boast of gentle cerebral high followed by soothing body relaxation.

China Yunnan is a pleasure to use. It may not be for the hardcore users, though. Hence, people looking for extreme psychoactive effects may have to use another strain. For most recreational users looking for a gentle high followed by deep relaxation, then this is one of the better choices.

It begins by inducing a reinvigorating euphoric high. From the back of the head down to the body, the initial buzz is uplifting and can certainly enhance the mood. Soon, users should find themselves feeling pleased and more sociable.

Once the physical effects kick in, the strain induces a soothing body high that is not likely to lead to a couch-lock. Still, the blissful feeling it delivers can cause users to drift off to sleep.

In most cases, users should find China Yunnan a mild strain. It does not mean that it cannot be overwhelming, though. Tested to have between 12% to 18% THC, it can be very potent.

Yunnan province has a diversified landscape. From afar, the sceneries it affords is among the best in the world. From deep gorges to snow-capped mountain peaks, nature’s scent is captured in the odor the strain emits. Boasting of a sweet and refreshing earthy aroma, it is also accompanied by a distinct smell of cheese with a fruity note.

Upon inhaling its smoke, the strain has a more pronounced taste of cheese blending with its earthy flavor. During exhalation, users should detect a fruity note.

Because China Yunnan is relatively new and has yet to break into the mainstream market, reports of its adverse reactions are not much. It does not appear to cause more unusual conditions compared to others, though. As such, a fair assumption is that it only produces typical reactions associated with cannabis use in general such as dry mouth and eyes.

According to Ace Seeds, China Yunnan can have as much as 3% CBD. Although it is not enough to make it an effective treatment for illnesses such as seizures or epilepsy, it does provide other benefits.

One of its most notable use is a result of the cerebral high that it induces. By delivering a euphoric buzz and uplifting the mood, China Yunnan can wipe out stress as well as provide comfort to people suffering from depression.

Although not widely reported, it is reasonable to expect the strain to provide a certain degree of relief from chronic pains and aches.

China Yunnan does not tolerate cold temperature. Instead, it prefers an environment that is dry and warm. Growers do have the choice of cultivating it indoor or outdoor.

Growers will want to top it early as well as use the LST training method. While China Yunnan has shown resistance to mold and mildew, it is best to make sure there is proper humidity. It should be ready for flowering in 8 to 9 weeks. Once ready, the estimated yield per square meter is 10 to 12 ounces.

China Yunnan starts to transition to the flowering stage between September and October. Each plant is also likely to produce 12 ounces of buds or more.

Have you ever smoked or grown your own China Yunnan? Please let me know what you think about this marijuana strain in the comments below.