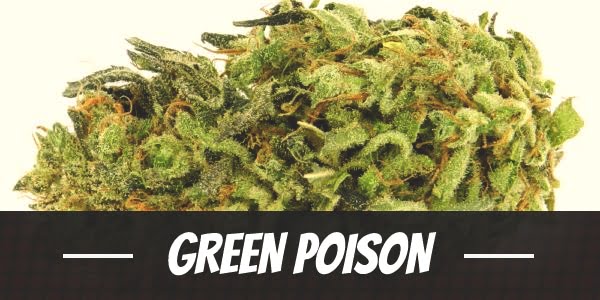 Green Poison sounds very much like the name of a cannabis strains. Of course, others especially those who jailbreak iPhones and iPads will remember the tool used to remove the restrictions of iOS. At any rate, the name alone suggests that the strain is notorious. Not that it will kill people, though. But it does suggest some form of narcotic-like effects. In reality, Green Poison is actually a friendly strain which only kills pains and aches.

It would have been nice to know its lineage. Unfortunately, the breeder Sweet Seeds elected to keep it a secret. Not that it matters for it is its effects that are more of concern for recreational and medical cannabis users. To that end, it certainly does not disappoint.

First, it lulls users into a false sense of security with its disarming aroma. Then, after taking a couple of tokes, it takes users on a cerebral journey coupled with a numbing body sedation.

To say Green Poison is a potent strain is an understatement. At best, tests have shown it to have as much as 20% THC. Hence, users should not underestimate it.

Green Poison, if there is anything lethal about it, is in its ability to provide comfort to those in need. Of course, we will cover this in more details in the Medical section.

Besides its exceptional aroma, another reason for some people underestimating the potency of this strain is because it takes a few tokes before its effects are felt. Once it does, it begins with an uplifting cerebral high. Often, this buzzing and sometimes tingling sensation are more than potent enough to not only enhance the mood but to also induce euphoria.

Users, feeling happy and reinvigorated, may also have a clear head as well as a sharper focus. In some instance, some people may also have heightened senses.

Slowly, though, the physical effects of Green Poison creeps down to the body. Almost without warning, it slams hard leaving users not only in deep relaxation but also spacey. In other words, the strain can cause a heavy stone.

As users find themselves in a complete state of relaxation, many also eventually fall asleep.

As soon as one opens the pack or the container, a sweet and spicy scent with a floral note fills the room. Although mild, some users may detect a slight skunky hint. Overall, Green Poison has an exceptionally delightful aroma that often makes first-time users of the strain wonder if it is as potent as it is made out to be.

Most of how it smells carry over with an added blend of pine. A citrusy and lemony aftertaste makes it quite smooth and easy on the throat as well as the lungs.

Green Poison, while leaving users heavily stoned and in a state of bliss also causes some adverse effects. Users can expect to feel their throat dry as well as have bloodshot red eyes.

In some instances, the buzzing high it induces can also cause some people to feel dizzy or have a mild headache.

Another thing to note is that people who are predisposed to anxiety will want to use only a small amount. That is because it can also cause a few people to feel more anxious. Often, this is a result of using too much.

Before using Green Poison, it is best to know individual tolerance limits and use just the right amount.

One of the most popular uses of cannabis among medical users is in melting away stress. On that note, Green Poison delivers with flying colors. Anything that is keeping people preoccupied with dread is gone as soon as the strain begins its cerebral onslaught. Consequently, in uplifting the mood of users, it also allows people with depression manage their condition.

As the strain puts users into deep relaxation, the sedative-like properties of Green Poison also offer some form of pain relief. It is then beneficial to people suffering from chronic pains and aches.

Early on, while the strain is inducing the cerebral high, the uplifting sensation surging through the body is at the same time reinvigorating. While it energizes users, such boost in energy is negated once the physical effects kick into the body.

As mentioned, most people using Green Poison often fall asleep. Hence, it is a useful companion for people who have trouble sleeping.

Green Poison is a joy to cultivate. Even better, it has a very short vegetative stage. It produces mint green pepper-shaped buds covered with amber hairs and trichomes.

Growing the plant inside the house, growers will want to use the Screen of Green training technique. It can start flowering in seven weeks with each square meter having a yield of 17 to 23 ounces.

Growers opting to plant Green Poison outdoors can expect flowering to occur from the third to fourth week of September. It thrives best in a humid or cold environment with each plant capable of producing up to 25 ounces.

Have you ever smoked or grown your own Green Poison? Please let me know what you think about this marijuana strain in the comments below.