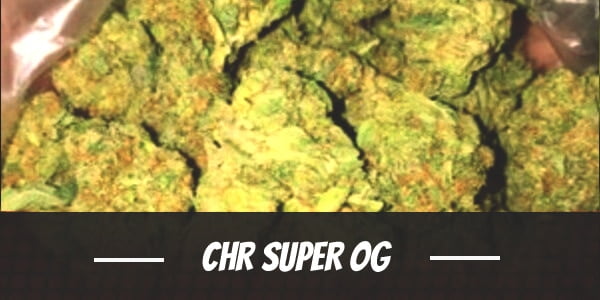 Los Angeles has produced some of the world’s best strains. One of which CHR Super OG, an Indica-dominant hybrid that delivers a tranquilizing head-to-toe high. It is potent too, with THC levels ranging from 17% to 25% at best.

Thrill seekers relish in the strain’s potency, trudging sometimes a little higher than personal limit for an added punch. Of course, beginners with low tolerance to THC should be a little more cautious and use it with caution.

In developing the CHR Super OG, its breeders took Skywalker OG for its high flying effects before crossing it with Tahoe OG Kush and its rainy day strain. To further enhance the resulting strain, another OG family member was crossed. In particular Larry OG, or Lemon Larry, for its sour terpene profile, dense buds, and performance in the grow room.

Indeed, CHR Super OG does its family proud. It induces an innate, and almost pure, sense of happiness that cradles users to bed with a smile on the face. The same calming euphoria also provides comfort to agonizing patients or an enthusiast coming home after a day’s work.

Like a true Indica strain, CHR Super OG is a slow starter with effects that do not manifest until 15 minutes after the first two or three puffs. As such, it is best to start slow and steady before gradually building up the effects. Otherwise, the powerful hybrid can overwhelm users from head-to-toe before locking bodies to the couch.

In moderation, the effects are quite pleasant. Its initial onset, in fact, is marked by a rush of euphoria that leaves users rather giggly. Without a doubt, it also inspires an innate sense of happiness.

Feelings of warm euphoria embrace the user with each passing hour. Subtle at first, it gradually intensifies until the body eases up totally. A heaviness plants itself in the limbs where rigidity in the muscles once inhabited. It will be difficult to move around during this stage of the high.

The sedating effects grow stronger until the eyelids droop. Eventually, one succumbs to the weight and falls asleep. Hand in hand with Mr. Sandman, the users drift off to dreamland. For this reason, it is important to use the strain at night as it can interfere with one’s plans for the day.

CHD Super OG has a complex but pungent fragrance to say the least. It is sour, reminiscent of diesel and strawberries, yet sweet like fruit. Crushed and combusted, its scent becomes similar to Pine-Sol in that there is a refreshing hint of pine to match the tanginess.

Once CHR Super OG’s smoke enters the palate, it washes over the mouth with the enticing fruity flavors of strawberry. Enhancing the sweetness is the woody taste of pine. And, on the exhale, a sour diesel lingers in the mouth for hours on end.

CHR Super OG can be quite overwhelming when used immoderately. In all likelihood, users will end up with a dizzying headache that develops into a subtle feeling of paranoia as sensitivities heighten. Such unpleasant effects are a stern warning to always pace consumption of the bud.

Cannabinoids, without fail, inhibit the production of moisture in the salivary glands and tear ducts. It is no different with CHR Super OG. Users may down a few glasses of water to ease the discomfort as it can last for hours.

Apart from the recreational, the value of CHR Super OG as a strain lies in its impressive ability to ease a myriad of mental and physical maladies. Although, like a true Indica, its power leans toward appeasing the latter.

Its potent THC levels contain natural analgesic properties that rid the body of pains and aches. Ironically, CHR Super OG’s best trait is allay headaches as it can just as easily cause it. Additionally, it calms eye pressure and spasms by soothing the muscles in areas affected. If the former is not addressed, it can develop into glaucoma.

Although subtle, the psychoactive compound is also capable of encouraging a hearty appetite. Free from cramps, the stomach is able to process food better.

Lastly, CHR Super OG puts users to bed with its sedating qualities. Simultaneously, it also enhances the quality and quantity of sleep.

CHR Super OG is a short plant that fits many growing areas with limited space. However, its wide leaves may have to be trimmed occasionally for light and air to pass through the lower nodes. Additionally, cutting down any dead parts will improve nutrient distribution.

When grown outside, this herb likes to bask in the warmth of the sun. Well-aerated soil is necessary to keep the soil from being damp. As such, it is recommended that growers use a smart pot for excess water to flow out easily. Keeping the plant healthy is mostly enough to keep pest and disease at bay.

With that said, it is important to provide the proper Nitrogen (N) – Phosphorous (P) – Potassium (K) ratios depending on the growing stage. At the same time, breeders must also ensure provide adequate water or solution to the growing plants.

Because to its heritage, CHR Super OG has a short flowering periods of 7 to 9 weeks to fully bloom. At harvest, it produces a decent 10 to 12 ounces of buds per square meter.

Growers can harvest a fully matured CHR Super OG between the last week of September to the middle of October. Yields usually average at least 12 ounces of buds per plant.

Have you ever smoked or grown your own CHR Super OG? Please let me know what you think about this marijuana strain in the comments below.