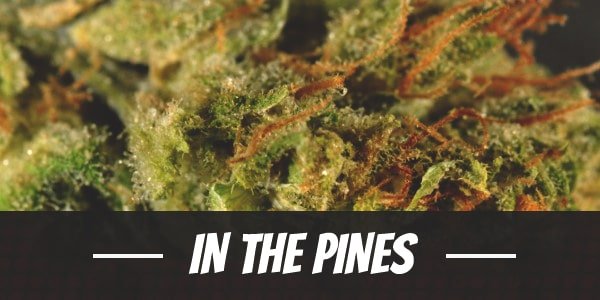 Aficionado Seeds are esteemed breeders that create and cultivate hybrids in the popular Mendocino County. One popular creation is In the Pines, a Sativa-dominant strain that has recently gained traction for its delicious woody smoke that boasts a 1:1 to 2:1 CBD to THC ratio.

Although primarily marketed toward the medical marijuana community, In the Pines has its recreational merits. For one, it is a great strain of choice for users with zero to low tolerance to THC. Its high CBD levels prevent an anxiety-inducing trip. On the other hand, thrill seekers can also benefit from its calming clarity which is especially handy during days when the mind is brimming with stressful negativity instead of motivating ideas.

Its origins trace itself back to East Asia with Pineapple Thai, a strain that sets itself apart with its high levels of CBD. It was later paired with Master Kush for its impressive sturdiness as well as mind and body numbing psychedelic effects. From it, In the Pines also gained its strong pine flavor. Finally, a hint of Pineapple was added. As its name suggests, it carries the terpene profile of the delicious tropical fruit that reduces stress through and through.

Suffice to say, the genetically diverse In the Pines is an impressive strain with a memorable taste and flavor. Its calming euphoria that grounds the mind while freeing the body of its pains.

Information about In the Pines:

In the Pines only has 7% THC. Thus, one should not expect an intense and fleeting recreational high. Still, it remains a favorite among many enthusiasts as a beginner’s strain as well as a companion to a relaxing day.

A subtle rush of energy surges through the muscles during the onset. Although barely noticeable, it is enough to loosen the body of tightness while improving the mood. For casual users, the upbeat disposition is a great advantage. Not only does an innate sense of happiness clear the mind of negativity, it also heightens motivation.

Because of its great wake-and-bake qualities, In the Pines is a great daytime strain. It keeps users focused with tasks at hand until it is sufficient enough or finished. The sense of fulfillment one gets for being productive also adds to its appeal.

Taking a deep whiff of In the Pines immediately takes one back to camping trip. It refreshes the nasal senses with its woody overtones and subtle but noticeable citrus scent. There is the aroma of wet soil too, as though rain had just splashed the ground with drizzle.

As invigorating as its scent is its refreshing flavor of pine that dominates the palate when drawn in. In the Pines also shares a hint of wet soil in its terpene profile. On the exhale, it leaves a tangy but zesty aftertaste of fruity citrus.

It is not uncommon for users to experience dryness in the eyes and the mouth when using marijuana, including a CBD-enriched strain like In the Pines. Although mild, the discomfort can be eased by downing a few glasses of water before, during, and after the session.

Although rare, users may also experience a temporary dizziness that can develop into a subtle feeling of paranoia. Although causes often point to consuming beyond personal tolerance, one’s disposition before the high also plays a major role. In such cases, it is best to use in low doses or avoid taking a puff at all.

At up to 12% CBD, In the Pines is among one of the most effective medical marijuana strains. As such, it is should come as no surprise that many patients seek it for a reprieve against a myriad of maladies.

Among its best uses is relieving inflammation by way of reducing swelling and redness. In doing so, it also prevents the muscles from suddenly contracting uncontrollably. For this reason, too, the strain can be of use as an analgesic that appeases pain. Meanwhile, its energizing body buzz brings back vigor to a physically fatigued user.

As a Sativa-dominant strain, In the Pines also works well with decreasing stress levels. Its calming euphoria enhances the mood and stabilizes turbulent emotions. As such, it also makes for a great source of comfort for patients dealing with mental health issues like depression, PTSD, and anxiety.

It is not wrong to think that In the Pines is considerably weak. After all, that has been the opinion of Sativa-dominant strains for a long time. However, through hybridization, it has gained the sturdiness of its lineage.

For example, it flowers early in the northern hemisphere despite its propensity for the sunny climate of the Mediterranean. Its stalks are sturdy enough to withstand harsh winds while its branches do not break easily from the weight of its heavy buds. And, unless the weather were extreme, it can handle much of the cold.

It will need to be pruned though. Typical of Sativa-dominant strains, In the Pines grows tall. Indoors, it will have to be topped early to keep it short. Pruning the plant, as well as applying the Screen of Green method, will help it produce more budding sites for higher yields. Trimming also improves light and air circulation among the lower nodes and nutrient distribution.

TIP: Find seeds similar to In the Pines at my seed shop

At the moment, Aficionado Seeds does not sell feminized seeds of In the Pines. As such, growers will have to employ pre-germination methods like soaking on the feminized seeds. This will improve the chances of a seed growing into a female. Meanwhile, applying Low-Stress Training techniques will keep the calyx-filled plant from turning into a hermaphrodite.

Compared to other Sativa-dominant strains, In the Pines has a short flowering period of 8 to 9 weeks. It yields between 12 to 16 ounces of buds per square meter at maturity. But, growers may extend the blossoming phase by a week or two for higher yields.

A sturdy plant, In the Pines flowers from the first to third week of October when cultivated in the northern hemisphere. Once ready for harvest, it yields at least 16 ounces of buds per plant.

Have you ever smoked or grown your own In the Pines? Please let me know what you think about this marijuana strain in the comments below.

0 comments on “In the Pines Strain”