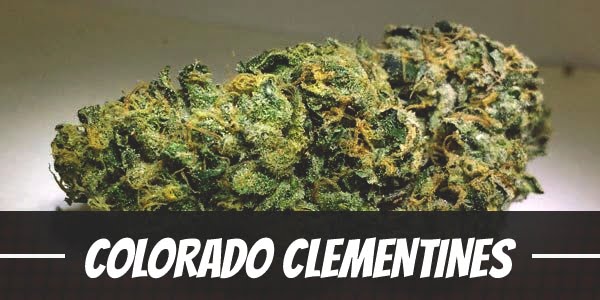 Colorado Clementines is a potent strain with an impressive THC levels of 22% to 24%. It gently cradles users up to a cloud of happiness before settling into the mind. Later on, it delivers a heavy-hitting high that leaves the body feeling fully limber and relaxed.

To create the strain, La Plata Labs used its own Big White and crossed it with TGA Genetics’ Agent Orange. The former influenced its milky trichomes and high yields with a subtle sweetness. Meanwhile, the latter influenced its tangy flavors and mood enhancing effects.

Beginners should use the strain with caution. Its potent levels of THC can overwhelm the body and the mind. As a result, one may end up in a couch-lock feeling disoriented. However, under the supervision of a seasoned friend, it can be a pleasant experience.

During the onset, it delivers a euphoric buzz that uplifts spirits. It enhances the mood while simultaneously bringing out a sense of happiness once the effects have settled. It leaves users feeling happy throughout and beyond the high.

Although subtle, the stimulating head high can also have an effect on the stomach. Users eventually start feeling hungry as the head high continues. Having snacks nearby will lessen the need to go to the kitchen once the munchies start especially as the Indica high usually hits around the same time.

A tingling sensation in between  the temples begins to intensify an hour or two from the first puff. It ebbs down slowly, soothing each muscle in its wake. Although the body is limber due to tight knots being loosened, it is difficult to move around. A heaviness, which planted itself in the limbs, envelops users in a blanket of relaxation. In all likelihood, the eyes will droop until one eventually falls fast asleep on the couch or after flopping on the bed.

Overall, the strain is best used at night. Its heavy-hitting high is counterproductive to a daytime high. Neither does it have any wake-and-bake quality.

Breaking apart a few of the Colorado Clementines buds release a pungent but tropical scent. It is accentuated by a citric aroma reminiscent of sweet lemons. Combusting it, on the other hand, reveals its spicy herbal undertones.

Inhaling Colorado Clementines’ smoke is like sipping on lemon juice. It has notes of citrus too which intensify its tangy flavors. Complementing it is the sweet herbs that turns into a spicy aftertaste on the exhale.

Colorado Clementines, like other strains, has cannabinoids that interfere with moisture production and retention in the body. As such, users end up with a mild case of dry eyes and a cottonmouth. It is normally not a cause for concern but, if symptoms persist, users may down a few glasses of water throughout the day to manage the annoyance.

It is not wrong to assume that Colorado Clementines is a recreational strain. After all, that has been the presumption of cannabis for the longest time whether rightly or wrongly. Still, it delivers a medicinal head-to-toe buzz that appeases a variety of afflictions.

Its happy high, for instance, calms the overwhelming dread that accompanies stress. It uplifts the mood while stabilizing mood-swings. Because of this, it is a great anti-depressant too. Patients dealing with mental health issues like depression, anxiety, and PTSD find comfort in its abilities.

In high levels, THC turns into a natural painkiller. It has analgesic properties that take effect all throughout the body beginning from the temples. As it ebbs down, it invigorates users from exhaustion or fatigue. Its soothing qualities provide relief to users with chronic pain issues.

Finally, the persistent relaxation ends with a deep, unencumbered slumber. Its sedating properties not only hasten the onset of sleep but also the improve the quality and quantity of sleep so users wake up feeling refreshed.

Colorado Clementines has the typical structure of an Indica. It has broad leaves, sturdy stalks, and thick branches. Not to mention, it can easily adapt to various growing conditions. Hence, beginners can grow the strain with ease.

Indoors, it does not need to be topped. However, it will need to be pruned often. Because of its density, it can sometimes harbor moisture in between its crevices that develop into mold or mildew if left unattended. Removing broad leaves and branches will improve light and air circulation while enhancing nutrient distribution to healthier budding sites.

The Sea of Green method works best with Colorado Clementines. Its relatively compact structure allows growers to fit at least four per square meter, thus increasing its yield. It may also work with the Screen of Green as it stretches quite a bit as it begins to blossom. Pairing it with a hydroponics setup will hasten the flowering period while directing nutrients to the roots. However, growers can also choose soil to improve flavors.

Installing an adequate ventilation system is highly recommended. Colorado Clementines can get very pungent, especially during the flowering period. It can irritate sensitive noses or alarm neighbors of discreet growers.

Colorado Clementines has an indoor flowering period of 7 to 9 weeks. At harvest, it produces between 10 to 12 ounces of buds per plant. However, growers can improve yields by implementing the Sea of Green method.

In the northern hemisphere, Colorado Clementines flowers from the second to the fourth week of October. Growers can expect at least 12 ounces of buds per plant.

Have you ever smoked or grown your own Colorado Clementines? Please let me know what you think about this marijuana strain in the comments below.