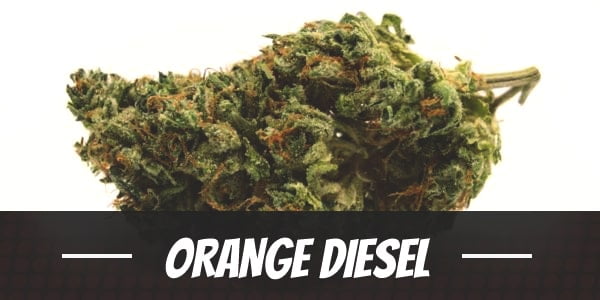 With strains named after anything and everything, it follows that one would be named after an agent. Orange Diesel is one of these strains. Also called Agent D, it is on a mission to eradicate stress.

To develop this strain, the breeder Lady Sativa Genetics Seeds used a male Agent Orange (from Catnip Seeds Italia) and crossed it with Sour Diesel (also called Sour D). As one can see, in crossing these two hybrids, the breeder used the names of these parent strains.

But more important than the name (or nickname), it is the traits of the parent strains that make or break one. In other words, fancy names alone do not guarantee acceptance of both the recreational and medical cannabis users.

Agent Orange is notable for its mood-enhancing uplifting high. Some may say that it is not any different from many others. But it sets itself apart with its fruity aroma. Sour Diesel, on the other hand, appeals to experienced and hardcore users with its pungent fuel scent and energizing buzz.

Orange Diesel, of course, took some of the best traits of its parents. But when it comes to cultivating the plant, it is also likely that one or two phenotypes may sprout from a batch of seeds. One may lean towards Agent Orange, while the other may lean towards Sour Diesel.

In this time and age when breeders keep developing new strains that come with insanely high THC, one would suppose that Orange Diesel is on the milder side. Still, with up to 18% THC, it is anything but potent.

At its onset, the strain provides users with an energetic buzz that uplifts the mood. It helps people clear their mind and in fact, may even boost creativity as well as induce sharper focus. As a result, productivity does not suffer.

Besides feeling invigorated, the cerebral high induced by Orange Diesel can also make people more sociable. In fact, users should not be surprised to find themselves more chatty than usual. As such, it makes for an excellent party strain.

As the physical effects set into the body, the gentle rush provides total body relaxation without the numbing or sedating effects. Because of this, people can use Orange Diesel even during the day. Also, expect to have a severe case of the munchies. Before its effects fully wanes off, the hunger pang can be intolerable.

Orange Diesel emits a pungent odor that infuses a strong sweet and citrusy note with the scent of fuel. One good way to imagine how the strain smells is to put Agent Orange and Sour Diesel side by side and take a sniff.

The strain tastes exactly how it smells with a mild skunky note. Most people should find the contrast in its flavors not only exotic but quite a delight. For those who have used Sour Diesel in the past, think of Orange Diesel and its smoke as the milder version with a note of orange.

Orange Diesel tames the harsh smoke of Sour Diesel, but when it comes to adverse effects, it can be tough to handle. Compared to others, it causes more pronounced symptoms even when used in moderation.

Besides users feeling their throats dry, they can also expect blood red eyes. The chances are that many will also experience a little bit of dizziness.

Before using the strain, it should also be noted that Orange Diesel can make users feel paranoid and more anxious. If these are not something one wants to deal with, then avoid using it.

There is not a lot of strains that can energize users the way Orange Diesel could. Hence, some people use it to combat fatigue.

The manner in which it can uplift the mood of users is also beneficial. In fact, people with depression or undergoing stress will want to use it. A few tokes and it takes users from some dark hole to la la land.

People with trouble eating and needs something to boost their appetite should look no further. Before the effects of Orange Diesel even wanes, the chances are high that they are opening their fridge door looking for food.

From seeds to neon green buds covered with fiery orange hairs and white trichomes, it should be a piece of cake. In essence, the plant is not that hard to cultivate and even better, it produces an abundant yield. Growers also have the option of growing it indoors or outdoors.

Indoor, the flowering time falls on the tenth week. Keep in mind, though, that phenotypes leaning towards Sour Diesel can be one week earlier. At any rate, expect to harvest 17 to 21 ounces of buds every square meter.

It appears that Orange Diesel starts to flower between the third to fourth week of October. Each plant should be able to produce at least 21 ounces of buds or more.

Have you ever smoked or grown your own Orange Diesel? Please let me know what you think about this marijuana strain in the comments below.