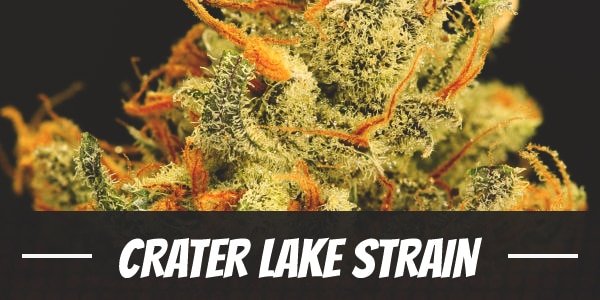 Located in Oregon, the caldera lake in Crater Lake National Park is one of the most magnificent sights in that part of the world.

It must be an incredible experience to sit back under a tree while overlooking the glassy surface of the water.

Of course, that experience becomes even better with a group of friends and a strain named after it.

While the natural wonder must have taken thousands if not millions of years to form, the strain itself also took a long time by our standards before finding its way to the public.

Then, it was crossed with a female Super Silver Haze. Naturally, the actual process is not as simple as it is made out to be. Nonetheless, after going through generations, a new hybrid was born.

Crater Lake is a continuing work in progress. While earlier versions have been released, they are not done in making it even better.

Unfortunately for the growers, it is a clone-only strain. It means that it is not likely to fall into the hands of anyone outside of Oregon, let alone the United States.

Crater Like by modern standards is not the most potent among all strains. Still, it comes with as much as 17% THC and can knock out users if one were to overindulge.

In moderation, it brings an uplifting mind and body high. Often, this is accompanied by mental clarity and free-flowing creative juice.

Aside from inspiring people and keep them motivated, it also provides a slight boost in energy to help with productivity.

In the company of other people, Crater Lake and turn the Grinch into a social creature.

Users tend to not only feel cheerful but also talkative. Be careful, though, or secrets may be revealed.

Humor aside, this would have made for an excellent party strain were it not for what comes next.

From the back of the head and the neck, the Indica traits of Crater Lake starts to kick in later.

As the numbing buzz ebbs down to the body, it promotes laziness.

Often, it leaves users in a complete state of relaxation and sitting still on the couch. Pretty soon, users simply drift off to sleep.

As some users reported, Crater Lake the view and the strain are both exceptional. But when it comes to fragrance, a better way to put it is that it is better off without having one.

Not that it is unusable but the skunky and earthy odor it emits with a hint of rotten fruit will take some time getting used to.

Fortunately, its smell does not really carry over to its taste. Or, rather, it is less pronounced and it does come with a note of coffee.

Crater Like, when it comes to adverse effects, does come with a few. Like others, it can cause people to have dry eyes and mouth.

It may also cause some to feel dizzy. Other than these conditions, it does not seem to cause any others, at least no one has reported yet.

Any time a strain can induce an uplifting high, the mood-enhancement already benefits people by taking away stress.

It also follows that people with depression can use it to manage their condition.

Even the ones who refuse to help themselves and think of the beauty that the world has to offer, a couple of tokes is all it takes.

While Crater Lake comes with potent Indica properties, it does not come with the sedation.

Still, some people can still use it for relief from mild pains and aches.

Early on, the strain sparks people to action with its reinvigorating buzz. However, that is only temporary as once the physical effects kick in, then users tend to feel lazy.

As mentioned earlier, Crater Lake is clone only. If one can get ahold of it though, they the choice of cultivating it indoors or outdoors is possible.

Keep in mind too, that there are at least three possible phenotypes:

Half the time, it will result in #1 which leans towards the 2012 Huckleberry.

It has a tight nodal spacing with chunky flowers as well as a blend of citrus and fuel fragrance.

It has a better yield among the phenotypes and can be very potent.

Finally, phenotype #3 comes with smaller buds and has a blend of hash, citrus, and berry scent.

Typically, Crater Lake has a flowering period of 8 to 9 weeks. During harvest, it may produce anywhere from 8 to 12 ounces of buds per square meter.

Have you ever smoked or grown your own Crater Lake? Please let me know what you think about this marijuana strain in the comments below.