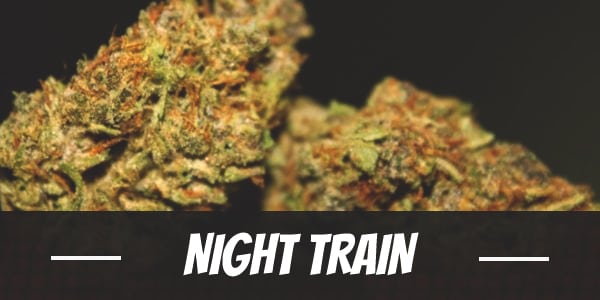 Night Train is truly a strain that lives up to its name. Users who smoke it are immediately issued a ticket to the land of dreams with its heavy-hitting bodily effects. Not only that, passengers enjoy the ride for its calming head high that swarms the mind with a feeling of euphoria.

It was not difficult to create Night Train. Elemental Seeds only had to choose a strain with effects that fully enveloped the body in relaxation. And what better product is there than Jasmine which is named after the brewed leaves that helped users sleep? Trainwreck was later added to enhance potency as well as improve its anxiety-relieving effects.

While it is mostly known for its high THC of up to 22%, Night Train is also an impressive performer in the grow room. It is a hardy strain that yields high and flowers quickly. Not to mention, it eases various mental and physical ailments.

Interestingly, it does not take long for Night Train to work its magic. In fact, despite being an Indica-dominant strain, its rapid cerebral onset that rarely takes 15 minutes to hold. An uplifting head high wraps the mind in a blanket of euphoria. It encourages a clam but happy disposition.

After about an hour or two, a tingling sensation builds from between the temples. It ebbs down slowly in waves and soothes each muscle until the body is fully enveloped in relaxation. In the limbs, a heaviness sets in that makes the eyes droop. Free of tension, users eventually fall into a deep asleep.

Because of its heavily sedating effects, it is better to use Night Train at night. Otherwise, those who choose to smoke it during the day will have difficulty resisting the urge to sleep. Moreover, it will hamper productivity and interfere with plans set for the day.

Night Train is no doubt a pungent strain because of its potent levels of THC. Breaking apart the buds reveal its woody notes of refreshing pine. Combusting it, however, releases a surprisingly strong nutty fragrance that fills the room.

In the palate, Night Train explodes with various flavors of hash, chocolate, and coffee. Overpowering all three, however, are woody overtones that swarm the mouth with the refreshing taste of pine. On the exhale, it leaves a nutty aftertaste.

Dehydration is a side effect that comes with the use of all strains. Its symptoms are reflected in the form of a cottonmouth and dry eyes. Although often ignored by many seasoned users, it is not uncommon for novices to experience discomfort. In such cases, it is better to stay hydrated by downing a few glasses of water.

Because of its potency, Night Train can sometimes make induce dizziness and paranoid especially when it is used excessively. Most of the time, however, users only experience a headache. Still, it is best to refrain from overindulging and, instead, practice pacing and moderation.

Presumably, Night Train is a recreational strain. Still, this does not mean it is without therapeutic value. Through the combined efforts of its THC, CBD, and cannabinoids like terpenes, it provides a reprieve to users against a variety of mental and health conditions.

Like many Indica-dominant strains, Night Train excels at mitigating physical afflictions. Its soothing buzz eases pain beginning from the temples. In relieving the body through and through, it relaxes the muscles to keep it from contracting and causing sharp spasms.

Apart from the physical, Night Train also has behavioral benefits. It reduces stress by encouraging users to lay back and relax which, if left unattended, can lead to more complicated conditions like insomnia. At the same time, the strain also encourages a good night’s rest while enhancing the quantity of sleep.

Night Train is a wonderful strain for beginners. A hardy plant, it can withstand various environmental problems such as strong gusts of wind, fluctuations in temperature, and sudden changes in weather conditions. Not only that, it is highly resilient in the face of mold, mildew, and moisture-related issues such as root rot.

It may require some protection against pests. And, for this reason, many growers are inclined to grow the plant indoors where there is added protection against critters. Moreover, controllable environments allow one to easily adjust factors such as temperature, lighting, and humidity which are important in bringing out the full potential of a plant.

The strain performs best when the Sea of Green method is used. It increases trichome production, encourages better yields, and saves a lot of time. As for mediums, one may hydroponic or aeroponic systems to get “cleaner buds.”

Night Train has an indoor flowering period of 8 to 9 weeks after initiating the flowering stage. Once ready for harvest, it yields 10 to 12 ounces of buds per square meter.

Garden or farm grown Night Train usually blossoms from the last week of September to the second or third week of October. Once fully mature, it produces 12 ounces of buds per plant.

Have you ever smoked or grown your own Night Train? Please let me know what you think about this marijuana strain in the comments below.