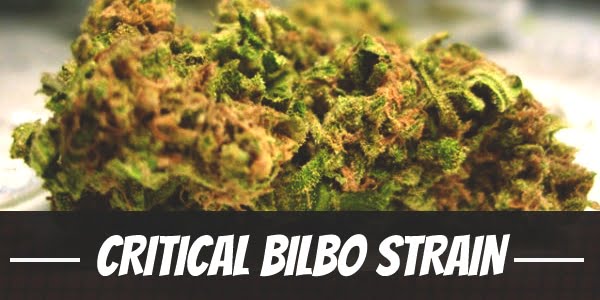 Critical Bilbo, aptly named, brings its brand of narcotic-like effects. It is also not merely a result of having a high THC content as many others have more. Hence, we can say that it is not for beginners. It does not matter how tolerant one is, but this strain is in one word – overwhelming.

If the above sounds ominous, then why is it that this strain has gained a following? In fact, it has already won numerous awards in the United States. Suffice to say, people who need to chill on lazy days will find it intriguing. Furthermore, patients who need to rest will also find it useful.

Genehtik Seeds bred Critical Bilbo. By some accounts, it traces its lineage to Critical Mass. It is a notable strain that produces dense and heavy buds that threatens to snap its branches unless supported. Because the breeder has not stated its origin, the vagueness has also led to other suppositions. For instance, different sites cite its parent strains as Skunk and an Afghani Indica strain. Those, undoubtedly, are the parent strains of Critical Mass.

Regardless if Critical Bilbo is a phenotype of Critical Mass or that is is the result of a cross with another Indica strain, what is important is that it delivers one thing the best. Besides putting people at ease, it also induces a heavy stone.

Critical Bilbo has been tested to have as much as 21% THC content. Besides that, it is the psychoactive effects that bring on a heavy stone that makes it unique and popular in a niche market. One thing that people feel upon using it is the rush of soothing sensation at its onset.

It has a weak Sativa side that brings on mild cerebral effects that include mental clarity and creativity. Such effects, though, are shortlived as the physical effects creep into the body. It then intensifies into a numbing buzz that induces deep relaxation. While this is happening, most people also feel their mood lightening and uplifted. In turn, a sense of contentment or even happiness set into the mind.

As mentioned earlier, the strain is overwhelming, but it does not do so in a bad way. Then again, that depends on preference. At any rate, its users soon find themselves lazy and locked on the couch. It is not that they feel lethargic, but more like spacey. It can also reach a point where the mind feels like swirling much like alcohol intoxication.

Critical Bilbo is not a strain that beginners should try. Even seasoned users will find it tough to handle. But for people who are into the narcotic-like effects of cannabis, it is hard to find another Indica-dominant strain that can do it as well as this one.

One trait that is endearing about this strain is the aroma it emits. It has a sweet honey odor with a fruity note of berries. In some ways, its fragrance can be quite misleading for it suggests a gentle hit rather than the whirlwind effects that it induces.

Much of how Critical Bilbo smells is evident in its flavors with the addition of a mild hint of tobacco. Considered by many to be smooth on the throat, most people should find it pleasant enough to use.

Lord forbid what happens when one overuses this strain. Even with moderate usage, there is nothing average about Critical Bilbo. In fact, we would go on suggesting that users trying it out for the first time should use only half of their usual consumption.

If there is one thing that is almost guaranteed, it is that many of its users experience dizziness to varying degrees. In many cases too, it is accompanied by elevated levels of anxiousness. In essence, people who already have anxiety issues, or are susceptible, should not use this strain. One more thing, a few people may also feel a little paranoid. So, that is also something to keep in mind.

Other than the adverse effects mentioned above, most users may also experience the most common reactions with the use of marijuana – dry mouth and eyes.

While the CBD content is too low to provide any benefit to illnesses that respond to the compound, Critical Bilbo does provide other benefits.

It appears, from the accounts of medical cannabis users, that is has been great in helping people deal with some gastrointestinal disorders including nausea.

As to be expected of the heavy-hitting Indica traits, the numbing buzz it sends to the body helps relieve muscles of tensions. As such, it helps people by providing pain relief from chronic illnesses and muscle spasms.

So as not to add to the discomfort, since the intent is to provide comfort, patients must be administered with only a small dose of this strain.

Critical Mass is available in seeds form, that is the good news. Furthermore, it is also quite a resilient plant and tolerant of mistakes. It means that beginners will find it less of a challenge to cultivate compared to other strains. Because of its quick flowering time, even with large buds, it is also resistant to molds.

Critical Bilbo is ready for the flowering stage in as early as six weeks. Regardless if one were to use regular or auto-flowering seeds, the plant could produce some 14 to 16 ounces of buds per square meter.

The plant thrives well outdoors, but depending on the type of seeds used, it either produces a small or insane amount of buds. In either case, flowering occurs in the first half of September. Plants grown from feminized seeds can produce an unbelievable amount of buds. At up to 70 ounces, that should bring on the high without even using. However, for auto-flowering seeds, it can only produce 4 to 7 ounces.

What is the Critical Bilbo strain yield?

Critical Bilbo yields 20 to 22 ounces per square meter indoors and 53 to 70 ounces per plant outdoors.

How much THC does Critical Bilbo have?

What are the origins of the Critical Bilbo strain?

Originally bred by Genehtik Seeds, Critical Bilbo is believed to be a descendant of the Critical Mass strain.

Have you ever smoked or grown your own Critical Bilbo? Please let me know what you think about this marijuana strain in the comments below.