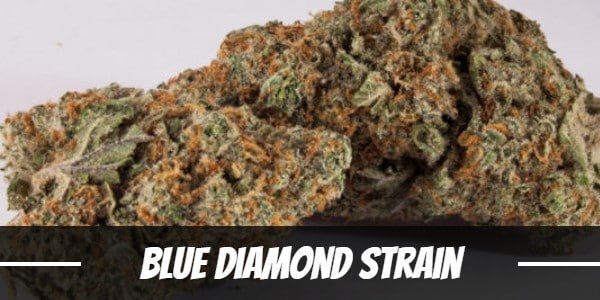 Blue Diamond is expensive, the stone that is. But for the strain, it is the benefits it brings that makes it valuable. Be it for recreational or medical cannabis users; this hybrid brings it on.

The strain is a product of notable breeder BioQueen Genetics. It appears that they have not released the exact parentage. But there is also a consensus that it may be a cross between Diamond OG and Blue Dream.

For many living on the West Coast of the USA, one of the few strains that have made its mark is OG Kush. Far more than its value for consumption, it is also the way breeders in the region used it to breed others. Through the years, it became one of the most prominent lineages in the cannabis world. OG Kush, paired with an unknown strain, gave birth to Diamond OG, one of the parents of Blue Diamond.

A couple of other incredible families are Blueberry and Haze. Both these strains, together with OG Kush, are what aficionados consider as legendary. Combine Blueberry and Haze, and the result is Blue Dream, the other parent strain of Blue Diamond.

Aside from the fruity aroma, the featured strain in this article also exhibits the best of its lineage. Hence, users can expect an equally powerful and stimulating experience with more of the effects leaning towards the Sativa side, despite it being a perfect split and the plant itself looking more like an Indica.

Blue Diamond is a fast-acting strain in that its effects are felt soon after smoking it. Often, in the beginning, it affects the emotional and mental state of its users. It sends a euphoric buzz that swings the mood to that of profound happiness. For many people too, it can improve focus and mental clarity.

Looking to buy seeds like Blue Diamond? Check out our marijuana seed bank.

The cerebral experience may come on quick, but it does not get overwhelming in that it causes psychedelic effects. But in some instances, it seems to increase the sensitivity such as users are more aware of the surrounding. But once users overindulge, Blue Diamond can also cause some mental confusion. Otherwise, most people end up with their mind oozing with one idea after another.

As the Indica traits start to work its way to the body, users should feel the tensions in the muscles vanishing. While their body feels heavier, the soothing feeling is also relaxing. In heavier doses, the sedative properties can lead people to a couch-lock.

As alluded to, the strain can lead to mental confusion. It does not often happen, though. Perhaps more people are likely to experience being in a narcotic-like state. In other words, heavily stoned and spacey.

The influence of OG Kush is evident in the odor that Blue Diamond emits, as well as the fruity note of pineapple. Depending on the phenotype, some should also have traces of the Blueberry lineage as well. At any rate, one can consider this strain as among the ones with an exceptionally pleasing aroma.

As good as its scent is, Blue Diamond is also exceptional when it comes to its flavors. Exhibiting the same traits as its fragrance, a mild taste of pineapple adds to its already delightful taste.

One thing is for sure when using Blue Diamond. The chances are high that most users will experience with a varying degree the symptoms of dry mouth. Not that the smoke itself is rough, but that is simply how it is with using cannabis.

At the same time, users should keep in mind that Blue Diamond is likely to cause people with anxiety issues or predisposed to paranoia to feel paranoid. That is if it is used in moderation. If using an excessive amount, then it is more likely to occur regardless of experience and tolerance level.

Other conditions that are more of annoyances include having a mild headache or feeling slightly dizzy.

These adverse effects are not going to cause any long-term or even short-term health risks.

In its lineage, Blue Diamond contains the genetics that made many of its predecessors some of the most sought-after strains in the world within the community of medical cannabis users.

We don’t currently sell the Blue Diamond seeds. Check out other Hybrid seeds in our marijuana seed bank.

On top of the list is the benefit of the Sativa side of Blue Diamond. Its ability to alter the mood and turn one euphoric is of greatest importance to people who are struggling with depression. As an aid, it helps uplifts the spirit and changes the behavior that gives these people the best chance to fight the negative thoughts and emotions.

Although there is a chance that some people may have a slight headache with the use of this strain, it is also one that helps people deal with a headache. Of course, that means users have to use the right amount.

One dilemma that users will have to face though are benefits for people with poor appetite and insomniacs. On the one hand, the strain causes people to feel very hungry. On the other hand, they are likely to be so relaxed that the urge to stay still may outweigh the need to eat something.

Blue Diamond grows well indoors or outdoors. One thing that growers may want to do is to bring it out to a colder temperature before it starts flowering. That way, it induces the appearance of purple hues. Not that it has any effect on the potency and yield, but it can certainly make the buds look nicer.

The estimated flowering period of Blue Diamond is eight weeks. Once ready, growers can pick up around 10 to 14 ounces of buds per square meter.

In open space, Blue Diamond should start flowering sometime in September. Each plant then can have a yield of 14 ounces or more.

What is the Blue Diamond strain yield?

How much THC does Blue Diamond have?

What are the origins of the Blue Diamond strain?

Have you ever smoked or grown your own Blue Diamond? Please let me know what you think about this marijuana strain in the comments below.