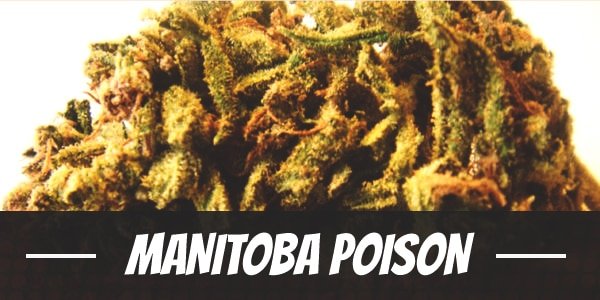 A couple of decades ago, IBM released an ad stating how the world was getting smaller. The company then was referring to global connectivity as technology continues to advance. It is the same thing too with regards to the world of marijuana. From Africa, strains found their way to Canada. And, as a result, it gave birth to Manitoba Poison. For cannabis enthusiasts, the world today is one without borders.

The strain traces its lineage to pure African landrace varieties. While no one knows precisely which ones the breeder used, most do tend to be Sativa. Not all, though, as Manitoba Poison is a balanced hybrid. It appears then that there must have been an Indica plant used in its breeding. Whether this other parent strain is native to Africa or not, that is no longer a concern.

Credit goes to Great White North Seed Company for breeding Manitoba Poison. Since its release, it has become one of the pride of the region. It also proves once again that the best cannabis hybrids are not limited to Europe or USA.

Although it has equal sides, the Manitoba Poison does tend to have a more pronounced Sativa effects. It comes with some 14% to 16% THC, an amount that is potent but not likely to be overwhelming. Even as it provides excellent effects for recreational users, it also brings many benefits for medical cannabis users.

Often, the names of cannabis strains give a hint of what users can expect with its use. Hence, to pick the name poison seems to suggest that this hybrid can induce lethal effects. We can say with full confidence that it is not the case here. Despite the notoriety of the name, it is, in fact, a gentle strain, that is if used in moderation.

In general, users describe it as soothing, calming, and comforting to the mind and the body. About as close as it gets to notoriety is its uncanny ability to put one to sleep.

It begins with a warm sensation that drifts into the body and altering the mood. Users feel uplifted and happiness sets in turning foul moods into cheerful. Soon, the cerebral high starts to take effect leading to mental clarity. Most people are likely to feel sensitive to the surroundings as their focus sharpens.

Use only a tiny amount and the gentle Sativa high is bound to keep people motivated. At full dosage or a better way to explain this is when users use it close to their limits, then its Indica side becomes more potent. Instead of only delivering a soothing sensation, it puts people in deep relaxation. It will not take long before one feels lazy. For many people, this leads to a marriage between user and couch.

Even if users experience the full Indica effects, one of the things that people like about Manitoba Poison is that it does not seem to cause mental confusion.

Imagine sitting on the edge of a forest. As the aroma of the wood drifts into the nose, take out a piece of cheese and sniff it. In many ways, that is how the Manitoba Poison smells. Break the buds, and its odor becomes even more pungent. While it has a distinct aroma, it is also very refreshing.

As alluded to, Manitoba Poison comes with a pleasing scent that carries over to its flavors with a twist. Throw in a glass of juice made from fresh herbs and add a citrusy, spicy aftertaste, then what users have is one of the better tasting cannabis worldwide.

Typical of cannabis strains, there are side effects that do not appear until one starts using a little too much. Granted that there are strains that come with more pronounced effects, Manitoba Poison is the opposite.

It can cause people to feel their throats drying, but in most cases, it is mild. It is when overindulging that it becomes conspicuous. At the same time, some people may also feel dizzy or paranoid.

At its onset, the uplifting buzz that alters the mood already starts the process of stress relief. Most people who use Manitoba Poison do feel happy and cheerful. Hence, they soon forget the troubles that had been weighing heavily and wreaking havoc on health.

The cerebral high is also of benefit to disorders that are mainly psychological including depression. In this instance, altering the mood helps patients deal with their emotions.

The physical effects of the strain have a sedative-like property in which it becomes useful in helping the body relax. It provides comfort to people who are enduring mild pains and aches including muscle spasms.

Patients need rest to recover. Insomniacs need to visit dreamland more often, or else they end up dropping by the hospital. And it is in this regard where Manitoba Poison is at its best, and that is to induce drowsiness that leads to quality sleep.

Manitoba Poison is an excellent strain for beginners. Even without much experience, most can manage to cultivate the plant. Although it thrives in both the indoor and outdoor environment, it does like to be out in the open more.

This plant produces beautiful jade buds with purple hues. Small and dense, it is covered by sparking dust of resins.

Manitoba Poison has a rapid flowering period that can start as early as the seventh week. Growers can expect the yield per square meter to be at 8 to 12 ounces.

In a colder to a temperate climate, the plant should transition to flowering by early September. It does not grow too tall and tops out at around 4 feet, so it can be hidden from plain sight if that is a concern. Each plant can produce at least 16 ounces of buds.

Have you ever smoked or grown your own Manitoba Poison? Please let me know what you think about this marijuana strain in the comments below.