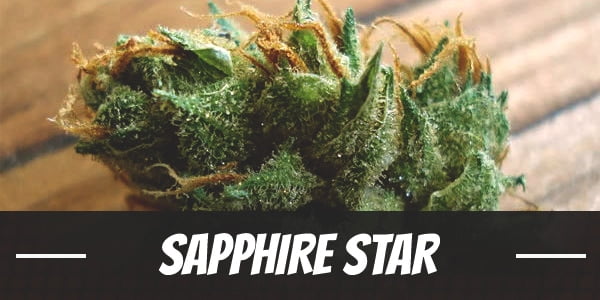 Green, purple, and now, blue. Of all the colors that can appear on cannabis, bluish hue is arguably the most unique. Furthermore, that it is being associated with sapphire has to mean something. Suffice to say; the strain is one that can boost the morale of anyone using it.

Bred by Jordan of the Islands, they used two hybrids – one that looks pretty while the other has a high yield.

Blue Hawaiian, aside from its looks, is also one that many users sought for its gentle high. In most cases, it delivers a smooth and balanced cerebral and physical effects.

God Bud, on the other hand, is a heavy-hitting Indica strain. For many growers, it is one of the breeds considered to be cash crops due to its production. Far more than that, it is its potency that should thrill users. But if one were not careful and ended up using a little bit too much, then it can induce psychedelic effects or hallucinations.

By crossing Blue Hawaiian and God Bud, Jordan of the Islands created Saphire Star. It brings its own kind of pretty and a tamer Indica traits. In fact, the strain leans more towards its Sativa side.

Sapphire has always been associated with wisdom. In that sense, the strain does do its color justice. It delivers a gentle rush that is not only soothing but also uplifting. In fact, it is the single most important benefit of using Saphire Star. But that is not what it can only do.

As it works its way to the mind, users will find themselves having mental clarity. It is also accompanied by a heightened sense of focus. Even as the physical high sets in, the strain still delivers an energetic buzz while feeling relaxed. For that reason, it is not likely to cause laziness or leave one on a couch lock.

Feeling motivated with a clear hear, it becomes easier to do tasks or stay productive. One could then say that this effect is very much like how the gem and wisdom became associated.

God Bud, as mentioned earlier, can cause psychedelic effects. Granted that there are people who would like that, most users do prefer a gentler strain. In this manner, one can also state that Sapphire Star is a better version of its two parent strains combined.

It can be used during the day. In fact, when with a group of people, the good feeling that it evokes is also one that makes users more sociable.

Relaxed and motivated, that is the best way to describe the effects of Sapphire Star. While it may not be available worldwide, users in Arizona where it can be found knows how valuable this gem is already.

Sapphire Star has a nice sour lemony aroma with a mild hint of skunk. It also comes with a scent that most people would find as fruity.

So, the strain has a fruity and lemony aroma that carries over. Furthermore, it also has a blend of wood and berry thrown into the mixture. A lingering aftertaste of menthol helps make for a smooth toke.

Sapphire Star may not be as potent as one of its parent strains, but that is not to say that it is a wimp. Tests have shown that it contains some 15% to 18% CBD. Hence, it is still a potent strain.

Under normal use, some people may experience dry eyes and, to a certain degree, cotton mouth. In most cases, it should not be much of a problem. However, the more one uses, the more pronounced these reactions. It may also lead to other adverse effects.

During the onset of the cerebral high, some may feel a little dizzy. But as one uses more than they can handle, then there is also a chance that a few people may find themselves feeling anxious or paranoid.

For medical cannabis users, the low CBD content of Sapphire Star cannot be used for illnesses such as seizures, epilepsy, and others that respond to CBD. But the mental and behavioral effects that it provides has a lot of value still.

Primarily, because of the way it uplifts people, it becomes a very effective stress reliever. It also has benefits for other problems associated with mental health such as depression.

Sapphire Star grows well regardless if it is planted indoor or outdoor. Generally, it is also deemed as easy to grow that even beginners can handle.

The plant can grow up to 6 feet indoor. Growers will want to control its height especially when space is limited. They also have a choice of using soil as a medium or hydroponics. Either way, the flowering time can be as early as seven weeks. Experienced growers can also consider using the sea of green technique if they can handle pruning and culling the leaves. Each square meter should produce 4 to 6 ounces of buds.

In an open area, Saphire Star can reach as high as 15 feet. Its flowering period should begin on the last days of September, and each plant can produce 5 to 10 ounces of dense buds with bluish hues.

Have you ever smoked or grown your own Sapphire Star? Please let me know what you think about this marijuana strain in the comments below.