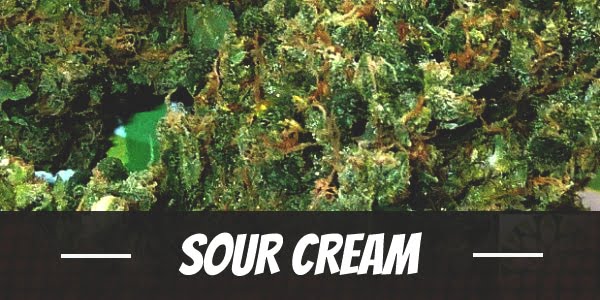 Inspired by its taste, there is more to Sour Cream than sharing the same name with its namesake. Bred by an outfit based in Amsterdam, it is the result of crossing two heavy-hitting strains that bring tremendous medicinal benefits.

G13 Haze is quite popular with its users for the strong Indica traits it delivers. Meanwhile, the other parent strain Sour Diesel is not only known for its distinct aroma but more because of the exalting Sativa traits.

One can say that Sour Cream inherited the best traits of its parents, but it does lean heavily on the Sativa side. Using this hybrid is akin to getting on a Ferris wheel. It brings users on top of the world and then brings them back to earth to bask in deep relaxation.

As cannabis users are or should be aware of, strains can have different potency across plants. Even at its lowest, Sour Cream remains an above-average strain. At best, it comes with up to 23% THC making it one of the most potent hybrids in the world. It also means that even if people use it within limits, its effects can be extreme and that makes it all so much more the better.

As expected with a Sativa-dominant cannabis, the onset ushers in a mad rush of euphoric buzz that uplifts the spirit. Such sensation often also feels energizing as if one gulped down a cup of double espresso. By altering the mood, most users find themselves feeling extremely good about themselves. Feeling happy and motivated, often, they can continue to do their tasks. As if that is not enough, the strain even heightens the ability to focus.

As the cerebral euphoria continues, the physical effects of the less dominant Indica side creep in. One mistake people assume with Sour Cream is underestimating the physical high. Once it kicks in, the sedative-like properties bring on a numbing buzz that puts people in deep relaxation.

By all accounts, the strain does not lead to psychedelic effects. Instead of causing a foggy mind, most users remain clear headed. There is none of the narcotic-like spacey high. Of course, that is on the assumption that the users used within limits.

Use more than the usual or breach individual tolerance limits, then the sedating effects become more pronounced. As a result, some people may start to feel lethargic.

Sour Cream emits a pungent odor of fuel that blends with the smell of earth. It is accompanied by a sweet and spicy note that softens the same fragrance that made one of its parents, Sour Diesel, widely popular. The scent itself is not so bad at all. In fact, most people soon learn how to appreciate it.

Aptly named, the strain comes with a creamy texture to go along with its sweet, tropical, fruity flavors. Users should also find the note of berries a nice touch. Often, users describe its taste as delightful.

Sour Cream can also cause some adverse effects like any other strain. Most people are likely to experience having dry mouth in varying severity. Some people may even have redness in their eyes.

If there is one thing that does cause a little discomfort, it is in that it may induce a mild headache. In most cases, under the full effects of the strain, most people go on to ignore this condition.

The intense cerebral euphoric buzz may also cause a few people to feel dizzy. It is usually temporary and will not last too long.

One thing to be aware of is that some people may be susceptible to anxiety. Hence, it is possible that they experience a slightly higher level of anxiousness or feel paranoid.

Both G13 Haze and Sour Diesel are touted to be among the best choices for medical cannabis users. Sour Cream, in that regards, is also the same.

Among its top uses among medical users, it is stress relief that makes it highly sought after. Also, the behavioral change to one of elation is quite useful in helping people battle the effects of depression and PTSD.

Even as the strain takes the mind away from any physical discomforts, it is the sedative-like traits that aid in alleviating the symptoms of pains and aches including headaches. It is a bit strange to think that a strain that can provide relief from headaches can also cause one. But that happens only when using too much.

Some people like the temporary boost in energy during the onset of the Sativa side. But that is also likely negated by the physical effects once it kicks in. If only for a moment, it can be used to combat the effects of fatigue.

Sour Cream can be grown by beginners. While it is not exactly a resistant and resilient plant, it is easy enough to nurture and maintain until harvest.

The plant grows more like an Indica where it has a flowering period of 10 to 12 weeks. Once ready, growers can expect to harvest some 14 to 21 ounces per square meter.

Sour Cream should thrive in a warm climate with plenty of sunshine but also have ample shading. It should reach maturity on the first days of November. Growers can harvest at least 21 ounces of buds per plant.

Have you ever smoked or grown your own Sour Cream? Please let me know what you think about this marijuana strain in the comments below.