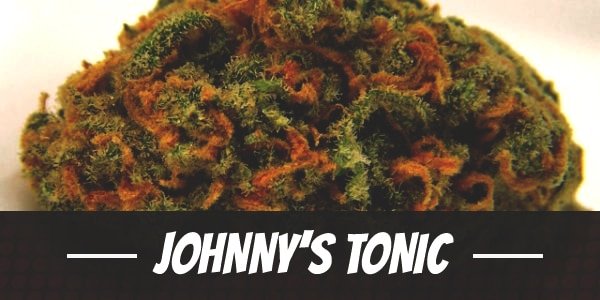 Johnny’s Tonic sounds like yet another bar drink that has only one purpose, and that is to put drinkers down. Actually, we are referring to a unique strain that also has the same purpose. But instead of knocking down the users, it actually pumps in some gleeful energy.

Of course, the typical uplifting Sativa buzz is not the best trait of this strain. Instead, it is the extremely high CBD that makes it valuable especially for people who have illnesses that respond positively to CBD as treatment. Obviously, this is a trait inherited from its parent strain CannaTonic.

The breeder responsible for creating Johnny’s Tonic is Elemental Seeds. It is one of the few that made is to the High Times Seed Bank Hall of Fame. They do not have a lot of strains compared to some other breeders, but the few they do, they are all premium quality. Their most notable strain, The True OG, has won numerous awards and is also one of the top 10 strains of 2015. Likewise, our featured hybrid itself is the winner of the 2014 High Times Cannabis Cup in Southern California for best CBD.

With regards to its psychoactive traits, it does possess a reasonable amount of THC to be considered as mild. In essence, people who use it for medical reasons will not have to worry about being overwhelmed. There are no heavy-hitting highs that lead to psychedelic effects.

Many Sativa-dominant strains come with exceptional mood-uplifting traits. In this regard, Johnny’s Tonic is not any different. But one thing that makes it unique in this day and age when the focus of most breeders is to develop high THC strains is that it has an average THC. The idea is likely tprovide an alternative hybrid for people who need cannabis more for a relaxing high rather than a mind-bending cerebral buzz.

Users of Johnny’s Tonic, besides feeling uplifted, naturally begin to have a good feeling about themselves. To that end, this strain is exceptional at making people feel happy. In some instances, a few people may even begin to feel euphoric.

Most of the time, the mild cerebral high does not hinder productivity. If anything, it does help improve by inducing mental clarity and the ability to focus better.

The subtle physical high is also evident as most people do tend to feel loose and relaxed. At no time does it go over the board to induce a numbing sensation and cause people to be lazy.

Johnny’s Tonic has a pungent odor especially once the buds are broken into smaller pieces. It has the refreshing smell of pine and earth as well as a mild skunky note. It is also accompanied by a sweet and citrusy scent that adds to the contrast resulting to a pleasant aroma.

On how it tastes, it is quite an interesting blend. A citrusy note accompanies the skunky flavor with a sweet lingering aftertaste. This exotic taste should please many of its users.

Because Johnny’s Tonic is a relatively new strain, there are not a lot of reports coming in. What is clear though is that it is still a cannabis no matter how great it is for the medical marijuana users. It means that the same conditions that occur with using weed are also present with this one.

Primarily, it can cause people to have dry eyes. To a lesser degree, it can also cause dry mouth. In both instances, the symptoms are usually mild.

Keep in mind, too, that it does have what can be considered as average potency. In other words, using more can cause the symptoms to worsen. Not that it can cause any real harm, but it can be uncomfortable.

The strength of Johnny’s Tonic is its high CBD that makes it valuable to medical users. Immediately, the first thing that comes to mind is that it can be useful to people suffering from epilepsy and seizures. There are also many other illnesses that the strain can help fight. Some of them include Parkinson’s Disease, Fibromyalgia, and many others. At present day, there are more and more scientists and researchers studying the use of cannabis in many diseases.

The high CBD content also seems to have significant benefits to soothe the muscles. For instance, it can help people manage inflammations and lessen cramping. Consequently, it can provide comfort to people suffering from chronic pains and aches.

The Sativa trait that beings on behavioral or psychological change are also helpful as a stress reliever. It should not come as a surprise that it also has its uses in managing emotion to help people with mental disorders including depression.

Unfortunately, Johnny’s Tonic is not available in seed form. It is also unlikely that anyone can get ahold of clippings for cloning. Elemental Seeds has only made it available for consumption through a few selected dealers.

If one were to get ahold of its seeds, the plant would likely grow equally well with hydroponics. Training is likely to be required as well as pruning and culling. A rough estimate of its flowering time should be in the range of 8 to 10 weeks. The estimated yield per square meter is around 10 to 14 ounces per square meter.

A climate that is warm and sunny such as that in California is the ideal condition to cultivate Johnny’s Tonic. Each plant should be able to produce at least 14 ounces of buds.

Have you ever smoked or grown your own Johnny’s Tonic? Please let me know what you think about this marijuana strain in the comments below.