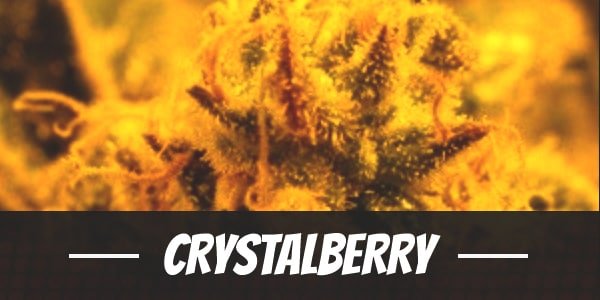 It is difficult to top a strain like DJ Short’s Blueberry. After all, 20 years of research and development has gone into creating the Indica-dominant plant. Of course, the effort was all worth it as it continues to be among the top West Coast varieties to this day. It boasts a delicious blueberry flavor and has robust landrace genetics that give it an advantage in the grow area.

Sensi Star is quite similar in that respect. It is a living legend that is world-renowned for its powerful Indica effects and subtle cerebral euphoria. Its buds are colorful too, showcasing a range of purples and blues. Not to mention, it is a delightful breeding strain that catches the light with its sparkling trichomes against a backdrop of deep-violet.

In crossing the two, the breeder created Crystalberry. As its name suggests, the bud tastes very much like berries. Its fruitiness is accentuated by the tangy but slightly sweet flavor of lemons. But, it can also allude to the fact that its buds are the size of blueberries that twinkle like crystals as huge drops of resin cover it.

Crystalberry is a potent strain. At up to 21%, drawing in its fruity smoke beyond personal tolerance can be an overwhelming experience as one’s senses are sharpened. In moderation, however, it is a pleasant high that starts with an uplifting buzz during the initial onset. As it swarms the mind, it clears away negativity and plants an innate sense of happiness in its place.

Although subtle, the mental stimulation still gets users hungry. As such, it is best to prepare snacks ahead of time before the strain’s heavy body high begins. In this way, too, users can snack comfortably at the couch instead of having to head to the kitchen as the laziness kicks in.

A warm, fuzzy sensation trickles down from between the eyes and down to the rest of the body. It soothes the muscles, destroying tension and untying knots in its wake. For many, the deep relaxation is enough to take one to bed for a full night’s rest.

For many, the psychedelic high ends with a deep, unencumbered slumber. However, the mental and physical freedom from inhibition can be quite arousing. Because of this, users may smoke the bud with a significant other for a great night ahead.

Crystalberry smells sweet and fruity. It is pungent too, due to its high levels of THC. Broken apart, crushed, or combusted, it releases the delightful scent of berries with strong notes of blueberries.

Similar to how it smells, Crystalberry bursts in the palate with the sweet taste of ripened fruit. There are obvious notes of blueberries that are sometimes overpowered by the overwhelming influence of berry. On the exhale, there is a subtle citrus that leaves an aftertaste of lemons.

Typical of marijuana, Crystalberry has cannabinoids that interfere with moisture production in areas like the eyes and the mouth. As such, red eyes and a cottonmouth are to be expected. The effects are mostly mild and usually go away with time. But, if symptoms persist, it is best to down a few glasses of water to ease the ache.

A third of American enthusiasts use marijuana for stress relief. After all, if left unattended to, it can lead to the early onset of health issues such as depression, anxiety, and hypertension. To this end, Crystalberry works perfectly. The happy high it induces reduces the overwhelming dread one feels toward work or life in general.

In a similar manner, Crystalberry can also be used as an anti-depressant to appease symptoms of various mental health issues like depression, anxiety, and PTSD. It brings backs one’s zest for life while stabilizing any of the turbulent emotions that often interfere with a person’s ability to soak the importance of a moment.

Its potent THC levels also naturally contains analgesic properties. It relaxes the muscles to keep it from contracting and afflicting painful spasms while relieving cramps. Eventually, the deep relaxation leads users to the bed for an unencumbered slumber. For this reason, it is a great bedtime companion for patients suffering from insomnia.

Crystalberry is not a tall plant. It has the compact structure of an Indica and rarely goes beyond 3 feet when cultivated indoors. A naturally branchy plant, the strain produces multiple budding sites that produce more buds once it reaches full maturity. However, it will need to be trimmed down so air and light reaches the lower nodes.

Apart from improving light and air circulation, pruning also lessens the chances of the plant developing humidity-related problems such as mold or mildew. By cutting away dead foliage, nutrients are distributed to healthier parts of the plant. Growers may also employ the Sea of Green method to maximize yields by utilizing space and the hormones that cannabis produce when grown close to each other.

TIP: Looking to buy seeds like Crystalberry? Check out our seed bank

Cultivated outdoors in either a garden or farm, the plant can reach up to 8 feet in height. This is especially true when it can bask under the warmth of the sun. However, it will do well in the cold and dry weather where it is away from high levels of moisture in the air. The cool temperatures also bring out its colorful hues of purple and blue.

With that said, it is important to provide proper NPK ratios during each of the different stages of the plant’s life cycle.

Crystalberry, like other Indica-dominant strains, has a short flowering period that lasts between 7 to 9 weeks. At harvest, growers can expect 10 to 12 ounces of buds per square meter.

With its high resistance to the cold, Crystalberry blooms earlier from the last week of September to the middle of October. Once fully mature, each plant produces at least 12 ounces of buds.

Have you ever smoked or grown your own Crystalberry? Please let me know what you think about this marijuana strain in the comments below.