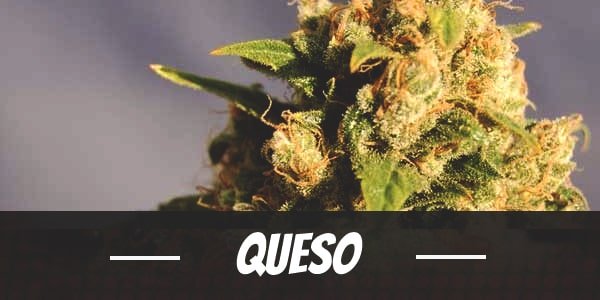 Queso is an irresistible strain to smoke. Its flavors which strongly resemble that of the universally loved cheese melt in the mouth and entice the palate. Not only that, it delivers a productive cerebral high paired with a soothing head-to-toe buzz that tucks users to bed.

In spite of its impressive wake-and-bake qualities, Queso is still best used at night. It has a hard-hitting high that catch users off guard when used beyond individual tolerance.

Queso is a versatile strain with manageable THC levels that range from 13% to 20%. For beginners, it can be an introduction to a more potent high. Meanwhile, veterans relish in the after-work head-to-toe relaxation it brings. During the initial onset, however, it delivers a rush of euphoria that not only clears the mind but also uplifts the spirit.

The mental clarity is a blessing in disguise for many casual users. It creates a path for thoughts to flow endlessly. As ideas form, one’s own creativity levels also surge. It renews motivation and users work on tasks or projects with immense focus as well as piqued interest. Being productive also inspires an innate sense of happiness.

It is best to prepare food ahead of time, before lighting the first bowl. Although subtle, the mental stimulation can be quite hunger inducing. Having snacks nearby, preferably at arm’s length, will help users replenish any of the energy lost while brainstorming or working. Not only that, it will keep one from breaking concentration to head to the kitchen.

After about an hour or two, a light pressure ebbs down the temples. It is the creeping Indica buzz in the background that has now intensified as it makes its way through the muscles. A deep relaxation blankets the body. In all likelihood, the eyes droop until users eventually fall asleep.

Queso, as its name suggests, smells strongly of cheese. It is pungent with noticeable hints of skunk. Broken apart or combusted, it releases undertones of wet soil which gradually fill the room.

Drawn in, Queso bursts in the palate with the familiar flavors of cheese. It waters the mouth with its subtle tanginess. But, as the smoke swirls, an overtone of skunk takes over. On the exhale, it leaves an earthy aftertaste that continues to linger hours after the last smoke.

Although anxiety is commonly associated with Sativa-leaning strains, Queso can still induce a head high powerful enough to trigger the condition. At times, it may even be accompanied by a subtle feeling of paranoia as the keen awareness persists. Most of the time, however, users only experience a cottonmouth and dry eyes due to the same cannabinoid interfering with moisture production. Still, it is best to start with low dosages to avoid greening out.

Kannabia Seeds primarily focuses in producing plants with great growing or commercial potential. Still, this does not diminish Queso’s therapeutic value. In fact, each healthy bud produced by its breeders provides patients with an adequate percentage of cannabinoids such as THC, CBD, and terpenes that work in synergy to ease a myriad of maladies.

Among its best uses is stimulating the mind with its soothing euphoria. It boosts moods while calming the mind of self-depreciating thoughts thus relieving stress in the process. In a similar manner, it also manages symptoms of anxiety, depression, and PTSD.

The same psychoactive compound also revives the appetite. For this reason, it is a source of comfort for patients suffering from cachexia or eating disorders like anorexia. But first, it tranquilizes any pains and aches that prevent users from downing a full meal heartily.

Beginning from the temples, a light buzz of energy spreads throughout the body. It relaxes the muscles to prevent painful spasms and cramps. In doing so, it appeases fatigue and other symptoms of physical stress.

As a product of the world-renowned Kannabia Seeds, it should come as no surprise that Queso is a strain with a great growth profile. Not only is it compact, it is also quite sturdy. In fact, its thick stalks and branches can withstand harsh winds that may sometimes come its way.

Without a doubt, gardens and farms are the best environment to grow Queso. It is also cost effective as growers need not buy expensive growing equipment. Under the full-spectrum rays of the sun, the plants grow tall, healthy, and strong. Although, it may need a temporary enclosing for early winters to protect against the frost. Harvest usually comes around the last week of September to the middle of October, or a week early. Each plant yields at least 18 ounces of tasty smelling buds.

Indoors, Queso’s height only peaks at 3 feet. Because it stays short, it is highly recommended for growing areas with little vertical space. Still, it is best to prune the plant. Due to its compact structure, it can easily harbor moisture in between its crevices. Removing parts also helps ventilate and circulate light in the lower nodes.

Utilizing the Sea of Green method will reduce the maturation time. Although, even without it, the plant still flowers early. After a blossoming phase of 7 to 9 weeks, it produces 16 ounces of buds per plant.

TIP: Buy seeds like Queso at my marijuana seed shop

Queso’s seeds are currently sold in various dispensaries in feminized form. This means that growers will not deal with creating half a batch of males or accidentally stressing out the plant until it turns into a hermaphrodite.

Like other Indica-dominant strains, Queso matures fast. After flowering for about 7 to 9 weeks, it produces up to 16 ounces of buds per square meter. Under the expert care of a seasoned grower, however, it can yield much more.

As alluded to earlier, Queso is a superbly sturdy plant that can withstand the cooler weather of the northern hemisphere. Thus, it is not uncommon to see flowers begin to bloom from the last week of September to the middle of October. Also a vigorous producer, it yields at least 18 ounces of buds per plant.