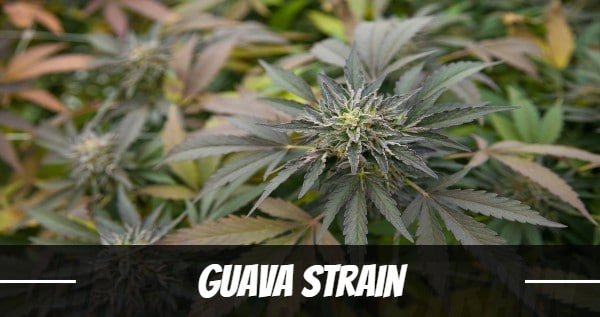 The Guava marijuana strain can be described in one word – mysterious. That’s why this Guava strain review starts with the complex history of this enigmatic beauty.

The original breeder of the Guava marijuana strain is a long-standing debate. With ties to Cookies Fam, Garden of Green, Sherbinski, and Flavour Chasers, it’s difficult to say who truly ‘owns’ this hybrid. To further complicate matters, the genetic history and strain name varies from breeder to breeder.

While Cookies Fam and Sherbinski agree on the genetic profile, describing Guava as a Gelato phenotype, they refer to the strain as Guava, and Guava Gelato, respectively. Flavour Chasers, believed by most to be the original breeder, and Garden of Green describe Guava as the offspring of Stardawg and Afghani.

Despite the hazy genetics, the characteristics and effects are the same across the board. The average THC level is 19%-22%, with just trace amounts of CBD. The dominant terpene is caryophyllene, much like Gelato and Stardawg.

When it comes down to it, it’s not who did it first but who does it best. But even this is debatable.

Guava will have you ready to debate until the cows come home. Not just because it makes you unusually talkative, but also because you will have the focus needed to hold your own. And even if you do lose this one, you will be too happy to care.

It is just as enjoyable when you’re alone, especially if you’re about to get creative. It is also an exceptional mood booster during cases of melancholia. Guava is adept at combating symptoms of stress, body pains, and ADHD. Even with no CBD Guava strain calms nerves and is also a great appetite stimulant.

The body high is energizing without being over-stimulating, creating an idyllic balance of relaxed motivation. Smokers recommended Guava any time of day, but wake-and-bake is where this strain shines.

The Guava weed strain outranks most of its companions on the pungency scale, but it also includes appetizing flavors as well. The fruity flavors hit your nose before they hit your tongue, reminiscent of a hot summer’s evening in paradise.

Guava perfectly captures the mixed aroma of a tropical oasis, punctuated by undertones of earthiness and spice. Add some fire to complement the aroma with subtle diesel scents that smell like you’ve thrown gas into those tropics and set them alight.

The Guava marijuana strain tastes the way you would expect. After all, it’s not called Guava for nothing. The main flavor profile is a sweet, tropical fruitiness with touches of berry and citrus. It’s similar to a large glass of Hawaiin punch.

The caryophyllene terpene lends the strain an earthy spiciness that keeps the sweetness in check. On the exhale, the guava flavor glides across your tongue, revitalizing your tastebuds and enticing you back in.

Guava Strain’s energizing high can help you be productive while creating a balance of relaxed motivation. Find strains with similar traits in our shop.

As appealing as the Guava strain effects may sound, this is not one for beginners. The most commonly reported adverse reaction is anxiety. For some, this is not such a big deal, but it can be frightening at the moment, especially for a first-time smoker. Some people develop panic attacks.

Another side effect is an elevated heart rate. Although not necessarily life-threatening, it can be dangerous in those with an already weakened system. If increased heart rate happens alongside other things, such as dizziness, shortness of breath, or chest pain, seek medical attention.

Although this Guava strain review describes an incredibly delectable flavor profile, it is not smooth on the throat going in, so be prepared to cough. Along with coughing, you can also expect a severe case of dry mouth. Some have reported prolonged cottonmouth that lasts well into the following day.

For this marijuana strain, personal tolerance applies. While many swear that smoking Guava before bed has cured their insomnia, others say they were up all night as a result of it. Because there is sufficient evidence to support both claims, it is best to smoke this one early in the day until you are familiar with the effects.

Now for the fun part – how to grow this flavorful strain. You’ll be happy to learn that, despite its complicated heritage, Guava is typically easy to grow. Start from feminized seeds for the best results.

The plant itself doesn’t take up an unreasonable amount of space. It reaches average heights of just 50 to 60 inches. The photoperiod version grows well indoors, outdoors, and in a greenhouse. You’ll have substantial yields under all growing conditions combined with the ease of growing a very low-maintenance strain. If you are a new grower, this will be one of the best to get you started.

Guava strain produces medium-sized, moss green plants with spade-shaped nugs (the spades seen on a deck of cards, not the tool standing in your shed). These nugs are covered with large, amber pistils and varnished with a layer of icy trichomes.

Once the plant reaches maturity, you can look forward to a generous portion of trichome-filled nugs come harvest.

Outdoor crops are ready to harvest in late October and yield anywhere from 2 to 3 oz/plant.

Are you a new grower looking for low-maintenance strains? Try our Beginner Mix pack and look forward to an easy growing season in a variety of settings.

Is Guava an Indica or Sativa strain?

Guava strain has quite hazy genetics and varies from breeder to breeder. Flavour Chasers says Guava is Indica dominant, Sherbinski says it’s a 50/50 hybrid, and Cookies Fam has a 75% Sativa / 25% indica version. Most people say Guava is Sativa-leaning with balanced effects.

What is Guava Gelato?

Breeders Cookies Fam and Sherbinski agree on Guava’s genetic profile, describing it as a Gelato phenotype. Hence, they refer to the strain as Guava, and “Guava Gelato”, respectively.

Becoming an expert marijuana grower only requires practice and learning. My blog can help set you on the right foot.

Have you smoked or grown your own Guava Strain? Tell us about your experience or leave questions in the comments.