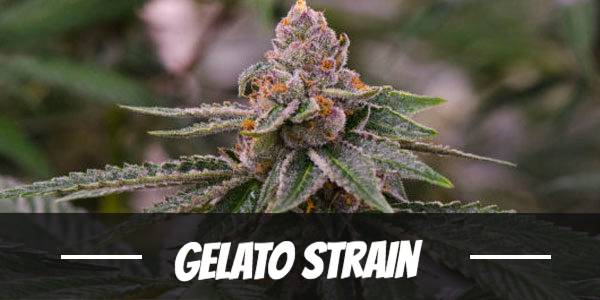 Gelato strain is a balanced hybrid, which tilts a tad bit in favor of Indica, that traces its parents to Thin Mint Girl Scout Cookies and Sunset Sherbet.

Having a cannabis strain, Gelato, nicknamed after NBA legend Larry Bird is no disrespect to the hall-of-famer.

Certainly, it does not suggest that the player turns to gel when the lights shine the brightest, and he cracks under the pressure.

No, there is another reason for that, which will be covered in the next section.

Gelato is so named after its fragrance and flavor.

As is to be expected, this cross between two cannabis weeds that were designed to have an agreeable aroma and taste resulted in one that you would find irresistible.

Everything that makes it HARD for you turns to gel as this is one strain that gives you a high that does not crash you physically.

How about that? There is a cannabis strain nicknamed Larry Bird.

But no, it is not because the legendary NBA player endorses it or anything, but more a reference to his jersey number 33.

Gelato is a hybrid that was bred by an outfit in San Francisco, Cookie Fam Genetics.

After having released several Gelato phenotypes, one, in particular, is numbered 33 which is how it became associated with Larry Legend.

Still, on the subject of gel, Gelato hits hard and if you are not cautious, may turn your legs to gel.

So, with up to 25% THC, novice and first-time users may want to consume a small amount in the beginning.

In no time at all, the effects of Gelato creeps in beginning with a sudden rush of head high, followed by physical relaxation.

So, how powerful is this strain?

Even experienced users with high tolerance have reported that as soon as the first inhalation, a head-high kicks in, which some describe as psychedelic.

Gelato is one strain that could stop you in your tracks as you take the time to adjust to intensified surroundings.

In many ways, this is a feel-good strain as you feel your mood changing to euphoric.

As such, Gelato is a good strain for social gatherings. With you feeling relaxed and happy, the body buzz starts to creep in.

If that sounds inviting, make sure to check out Gelato fem seeds at our online seed shop.

The great thing about Gelato is that it does not leave you mindless. In fact, a spark of creativity is induced. You may be laughing with your friends, but your mind is functioning well.

The general sense of good feeling is heightened as you let loose of the stress and tensions in your body.

Traces of Gelato’s parent, the Sunset Sherbet, can be detected with the smell of pungent orange. But once it is grounded, an earthly hint is added to its aroma.

It takes its sweet aroma from its other parent, Thin Mint Girl Scout Cookies. As a result, Gelato has one of the most agreeable aromas among cannabis weeds.

Gelato has a distinct taste with an aftertaste of berry and citrus.

Its taste is also its greatest strength compared to other strains as this one has a more universally agreeable flavor.

One thing to note is that it does have a pungent smell. That means there might be people nearby who may smell it.

Gelato does not have any serious adverse reactions, other than what is common in cannabis strains.

Because it kicks in hard and fast, it is reasonable to expect momentary dizziness.

Some people have reported experiencing a mild headache. But on rare occasions, this strain may cause a slightly elevated level of anxiousness.

A good thing to do when smoking weeds are to stay hydrated by drinking fluids, especially water.

And that should take care of a headache and one more thing, the one reaction common to almost all strains, and that is having dry mouth.

Are you a marijuana veteran burdened by a high tolerance looking for an easy smoke that hits hard every time? You are going to love Gelato!

Gelato has a sedative quality that helps in physical relaxation. It also has a numbing quality that gives it medicinal value, such as in relief from chronic pains and aches.

The head high and mood altering quality it has benefited those who are suffering from depression and other anxiety disorders.

Combined with body relaxation, stress levels are decreased to a manageable level.

Speaking of body relaxation, this strain, if used in the evening, may also help those who have problems sleeping such as those with insomnia.

It does not only smell or tastes good, gelato also is beautiful to look at. Bright orange hairs with sparkling white resin coats the dark purple hues of its small buds.

But there is one thing that may make it hard for you to plant this strain.

It seems that seeds are not commonly sold. If you do have access to plants, trimming and cultivating clones works.

This plant is not easy to grow, so indoors and especially using a grow tent is preferable.

That is because you have better control of the temperature. With an ideal growing condition, harvest can be expected in 8 to 9 weeks.

The actual yield is unknown but it should be better than average.

One more thing. The use of grow tents is preferable as it can also hide the pungent odor of the plant.

Grown outdoor, the ideal climate of Gelato is warm and humid conditions.

If it can be exposed to cooler temperature before flowering period, then it would improve its quality.

No actual data is available but because of the high yield of its parents, it is reasonable to expect this strain to have a yield as well.

Gelato is ready for harvest in mid-October.

What is the Gelato strain yield?

How much THC does Gelato strain have?

What are the origins of the Gelato strain?

The Gelato strain was created in California’s Bay Area by combining genes from Sunset Sherbert and Thin Mint GSC.

Have you ever smoked or grown your own Gelato? Please let me know what you think about this marijuana strain in the comments below.

I am currently growing sunset gelato and this will be my 2nd grow of this strain. I like the flavor and aroma but she is difficult to grow. Perfectly symmetrical plant, grows wide and buds are smaller but pack a good buzz. Planning to clone the current plant and figure this strain out and what makes her grow the best.